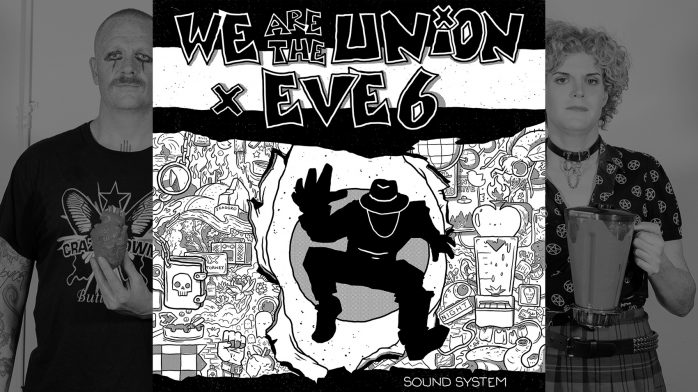 We know you people love Operation Ivy. And clearly, you love Riot Fest. Have you ever wished for these two things to be combined? Then keep reading, fellow ska-ficionados, because we’ve got the best news in the world for you: the unlikely combo of We Are the Union and Eve 6 have joined forces for an unforgettable cover of “Sound System,” and there’s truly no better place to premiere it than here. Watch the music video below.

The video was directed by Chris Graue (who shot this in someone’s garage, clearly), and features the two bands breaking all the rules they possibly can. Which is very fitting, considering we had to temporarily lift Eve 6’s ban from the festival to make this happen. You’re welcome, Eve 6. Starting tomorrow though, you’re still banned from Riot Fest (you know what you did).

“Operation Ivy made one of the best records ever made and then erased themselves like a Tibetan sand mandala, and that’s how they should remain: a sacrosanct subject of beauty and myth,” Eve 6’s Max Collins told us, calling his own cover “an abomination” in a press statement. “…But like, we couldn’t help it,” he concludes.

Speaking further on the unlikely partnership, We Are the Union’s Reade Wolcott adds: “Obviously nobody has ever covered Operation Ivy before, so we thought this would be a cool thing to do.” She also insisted that I instruct everyone reading this to “Drink Liquid Death,” whatever that means.

“Sound System” will hit streaming services worldwide tonight at 11:00 p.m. CT. Hopefully this is exactly what you wanted—and at the very least, maybe Laura Jane Grace will stop bugging us now.