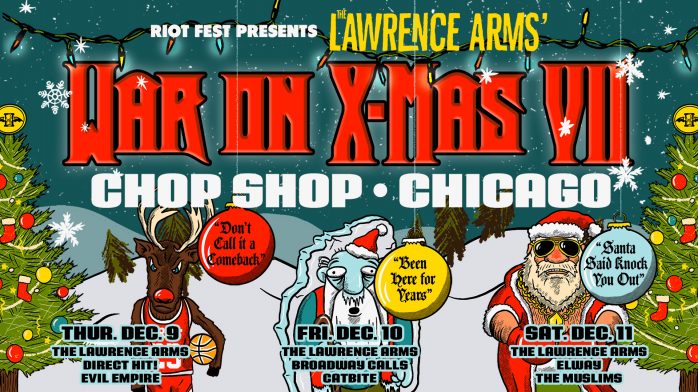 After a stellar all-digital War On X-Mas last year, we’re unbelievably excited to finally announce the greatest Christmas-themed punk show on earth that takes place in Chicago in 2021: The Lawrence Arms are once again coming to bestow holiday cheer on all for the seventh annual War On X-Mas!

(UPDATE: Friday, Saturday, and 3-Day Passes are now sold out! We have some Thursday tickets left (better get those sooner than later, folks), but we’ve also added a special Sunday Matinee at Cobra Lounge on December 12 with Broadway Calls, Catbite, and Elway—grab your tickets here.)

Tickets are ON SALE NOW for three nights of holiday cheer at Chicago’s Chop Shop on December 9, 10 & 11 (with a Sunday matinee TBA!)—featuring special guests Direct Hit!, Broadway Calls, Elway + more! You can even grab a three-day pass and save a little Christmas cash, if you please. A portion of the proceeds will once again be going to the Greater Chicago Food Depository. And, as is tradition, the three evenings will be themed, and themed thusly…

Saturday, December 11:
“SANTA SAID KNOCK YOU OUT”
The Lawrence Arms
w/ Elway + The Muslims
SOLD OUT!