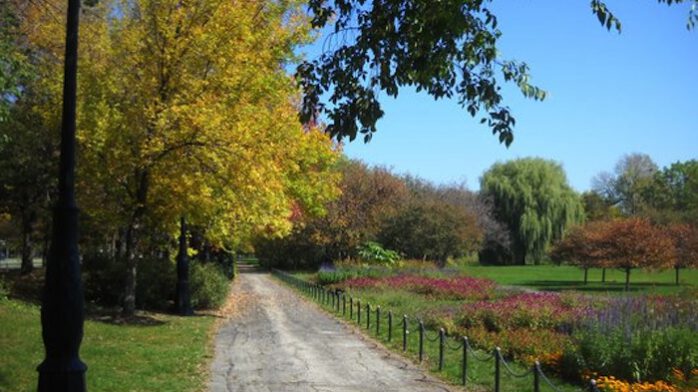 We are proud to announce, although we are saddened by our departure from Humboldt Park, Riot Fest & Carnival 2015 will remain in Chicago and be held in Douglas Park.

Recently, as evidenced in the media, there were those who attempted to divide the Humboldt Park community with unfair and unjust tactics that in no way represent the overwhelming majority of the 26th Ward residents and businesses. And while Riot Fest supporters stressed that without question, Riot Fest has done nothing short of showing their unparalleled devotion to the city and the neighborhood they called home, Riot Fest partners, Michael Petryshyn and Sean McKeough made the ethical decision not to allow the festival to be used as a pawn and removed Riot Fest from the conversation regarding the ever-changing face of Humboldt Park.

In so doing, and after looking into a nearly dozen options on the table, which included leaving the city limits altogether, Mike and Sean chose Douglas Park as Riot Fest’s new home because of the beauty of the park, its proximity to public transportation, the accessibility for fans, the diversity of the neighborhood and the overwhelming feeling that they were welcomed and wanted.

“Music brings people of all different backgrounds together. It’s the melodies and lyrics that artists create that inspire us, motivate us, and maybe even more importantly, it provides a mixtape of important events in our lives,” said 12th Ward Alderman George Cardenas. “From Woodstock to Riot Fest it’s about unity and creating a positive community. It’s as American pie as you can get. We are excited that Riot Fest has honored us by selecting Douglas Park as its new home. More importantly, the community is thrilled to say ‘welcome’ to the over 150,000 fans, artists and staff that make Riot Fest possible. We look forward to working with Riot Fest, Mike and Sean, and we welcome the economic impact Riot Fest brings to the community.”

Douglas Park, a historical regional park, is a ten-minute ride from Humboldt Park and just steps from the CTA’s pink line. Designed by William Le Baron Jenney—who also designed Humboldt and Garfield Park—Douglas Park captures the same elements that made Riot Fest unique as a city event. It features ponds, gardens, lagoons and the same scenic terrain attendees have become accustomed to as Riot Fest’s backdrop. It even has a golf course. Moreover, Douglas Park is close to the Lagunitas Brewing Company, the Illinois Medical District and as residents are already aware, the immediate and surrounding neighborhoods offer some of the best places to eat, drink and meet up in all of Chicago.

“In my very first meeting with Alderman Cardenas, I was happy that we were discussing logistical details and how we could enrich the community. Quite frankly, I was silently ecstatic. He gets it and it was genuine. Our goal has always been to leave a positive impact in the community we call home by helping local independent businesses, hiring ward residents and making an impact year-round. We did that in our previous home and plan to do the same — if not more — in the community surrounding Douglas Park and the 12th Ward.”

Petryshyn continues: “As soon as we started discussing community, it was refreshing to see George get up from his desk and start pointing on the ward map to the local businesses we need to meet and have a formal introduction.  He was excited and so was I.  To have an an elected official see clearly how we can bring good things is humbling. To be appreciated for who we are—as people running an indie company and a festival—by him and all of the supporters has been inspiring.”

It’s also important to note, that had it not been for Alderman George Cardenas and Alderman Proco “Joe” Moreno, Riot Fest would have entirely left the city limits. Both were entirely responsible, in the 11th hour, in keeping Riot Fest in the city.

“I know Alderman Moreno has been passionate about doing everything he could to keep Riot Fest in Humboldt Park,” said McKeough. “He knows first-hand how an event like this can benefit local businesses and residents because his ward borders Humboldt Park.  But, when the decision was made by us to take the high road, Joe convinced us, alongside Alderman Cardenas, that Chicago—no matter what—should remain Riot Fest’s home. Joe and George did well by Chicago and indie music fans by championing Riot Fest for what it truly is. Joe knows it belongs here. George knows it belongs here. And, because of them, we want to keep it here.”

With the excitement of calling Douglas Park our new home for 2015, we cannot wait to announce the lineup next week. It’s that good. Seriously.

Thank you to all of our fans, supporters and bands. Without you, we have nothing and are just another festival.

WELCOME TO DOUGLAS PARK – GET TO KNOW THE PARK