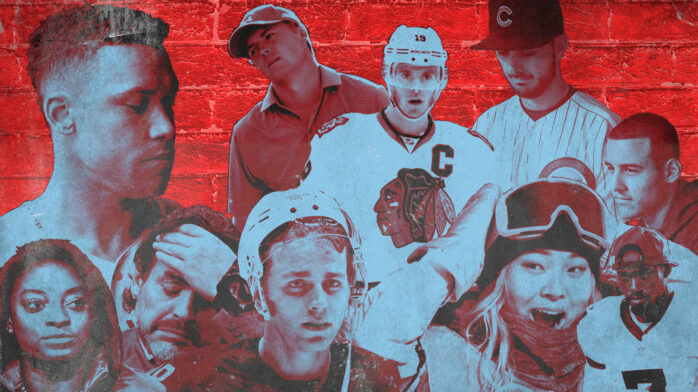 As rap music continually bends, shifts, and re-invents itself, one of the few constants is its connection to sports culture — as the old saying goes, every athlete wants to be a rapper, and every rapper wants to be an athlete. This intersection of sports and hip-hop is always fascinating, whether it manifests itself in rappers wearing throwback jerseys, athletes dropping albums, or lyrics about famous athletes. The very song that introduced America to rap music featured Big Bank Hank flexing the color TV he watched the Knicks on. From Phife Dawg to Action Bronson, rappers have been showcasing their sports knowledge for decades. Icons like Michael Jordan, Lionel Messi, and Barry Bonds are littered across EP’s and mixtapes, but some surprisingly big ballers are still waiting their turn.

Even after hitting 52 home runs, finishing first in Rookie of the Year voting and second in MVP, taking the most successful franchise in American sports farther than it’d been in eight years, and getting an entire section of Yankee Stadium dedicated to him, Aaron Judge still hasn’t been name-dropped by any rappers.

He undoubtedly deserves it. I mean, shit, even Chuck Knoblauch and Randy Velarde have been referenced by Action Bronson before, and neither of them have as many home runs in their entire Yankee careers as Judge had last season. When it comes to Olympics-rap crossover content, the summer athletes get most of the shine. Michael Phelps famously warmed up for his gold medal-winning swims by listening to Jeezy, and later heard his name in countless lyrics. Even diving legend Greg Louganis nabbed a piece of hip-hop history when Big Boi rapped, “I hit the head like Greg Louganis then I’m splashing.”

Winter Olympians aren’t part of the cultural zeitgeist like their summer equivalents are. But after shredding (and tweeting) her way into the hearts of millions at the 2018 games, American snowboarder Chloe Kim is next in line for a name drop. Not only did the 17-year-old bring home a gold medal, she also listened to the Migos/Nicki Minjaj/Cardi B slapper “Motorsport” during the process. Odds are she won’t be on this list for long. When looking at America’s favorite sports, golf is probably the least-aligned with hip-hop. Aside from Tiger Woods — whose persona took on a life of its own — only a handful of golfers have ever shown up in rap songs. However, one of the few similarities between MC’s and golfers is their abilities to make millions at a young age.

24-year-old Jordan Spieth has three major tournament championships under his belt already, not to mention an estimated $37 million in career earnings. That sort of instant ascension to greatness should draw the attention of rhyme spitters. Maybe Scarface, who shares a golf obsession and Texas roots with Spieth, will work the golfer’s name into a verse. Like golf, hockey rarely finds itself intertwined with the rap game. Aside from some classic wardrobe choices, like Snoop Dogg’s timeless Penguins sweater, Tupac’s Red Wings jersey, and the late Craig Mack’s Tampa Bay Lightning threads, rappers generally have not had much interest in the NHL. While transcendent superstars like Wayne Gretzky and Sidney Crosby have been name dropped, the same can not be said about Chicago’s current hockey heroes. Neither Patrick Kane or Jonathan Toews, three-time Stanley Cup winners for the Blackhawks, have made their way into the rap lexicon yet. Like their counterparts on the ice, Chicago’s dynamic duo of Kris Bryant and Anthony Rizzo have been suspiciously absent from rap lyrics. After ending the Cubs’ infamous 108-year World Series drought, the two appeared in commercials and became the subject of an Eddie Vedder jingle. With two championship rings and five All-Star Games between them, the pair of infielders certainly have the star power to merit a rap reference.

Raiders’ punter Marquette King, the only black punter in the NFL, and one of few black kicking specialists in league history, is both elite and unique for his position. It is astonishing that a “kick it like King” line does not exist yet. Gymnasts have popped up on a handful of tracks over the last five years. Gabby Douglas vaulted into Common and Post Malone lyrics after grabbing golds at the 2012 Olympics. Big K.R.I.T. and Dave East have each paid respect to Dominique Dawes in their lyrics, but Simone Biles remains unnamed. He may be a titan of the world’s most popular sport, but Argentinian soccer god Diego Maradona is still looking for his first rapper shout out. Given his well-documented drug habits, and the rhymability of his name, it’s quite shocking that no coke rappers capitalized on that opportunity. Matthew Roberson is a blogger and standup comedian living in the Seattle area. He is an avid NBA and MLB fan with a passion for music and comedy.