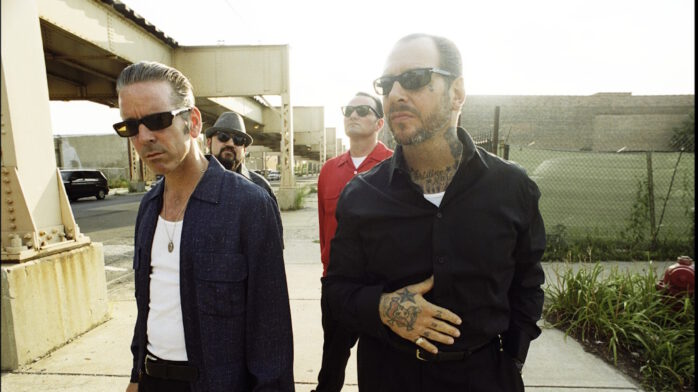 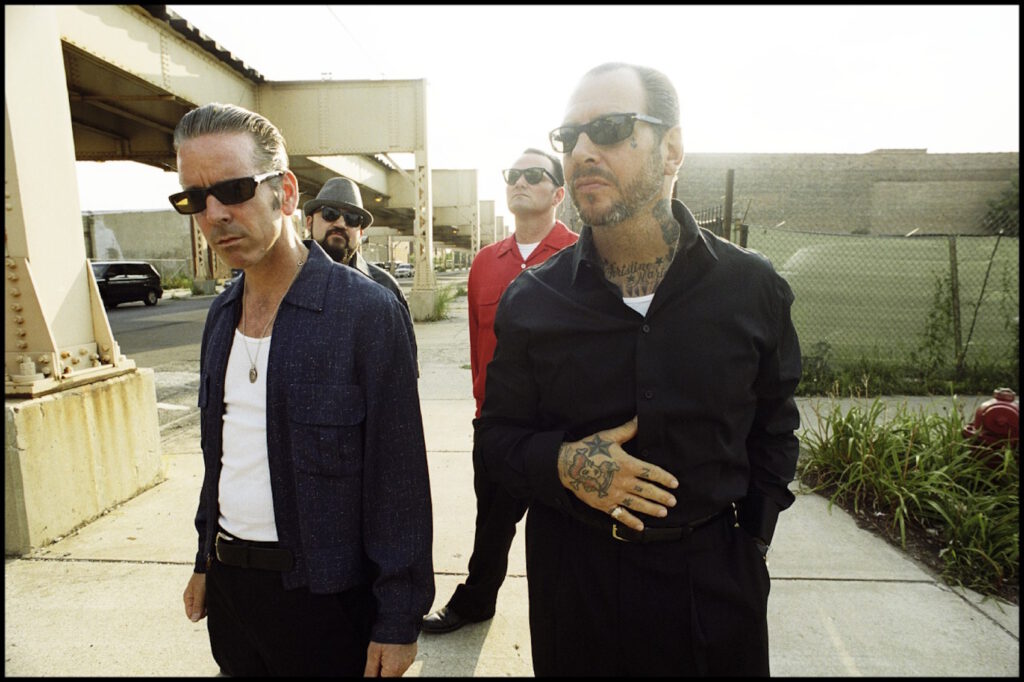 On September, 17, 1996, Social Distortion released its fifth album, White Light, White Heat, White Trash. The band, which had formed in Los Angeles in 1978, had long been known for its streetwise punk rock that over the years had grown to include influences from outlaw country and blues, but with White Light… (named as a play on The Velvet Underground’s 1968 album White Light/White Heat) it stripped back to the basics, and produced the heaviest, hardest-rocking album of its career to date. Exactly 20 years to the day it was first shared with the world, Social Distortion will play the album in full for the first time at Riot Fest Chicago.

Musically speaking, the record is characterized by straight-forward, powerful guitar ballads often infused with frustration, sadness, and angst. Songs like “Don’t Drag Me Down,” and “Through These Eyes” were steeped in social and political commentary but the majority of the record’s lyrical themes are introspective in nature, and have to do with coming to a crossroads in life, looking back on the past, and ultimately, taking a stand to walk a different path.

Though he already had a tendency towards confessional songwriting, on White Light… Ness dug even deeper into his soul, which he attributes to having been in a dark period in his life. “I was 10 years into my recovery from drugs and alcohol and certain things were becoming clear to me, like maybe drugs and alcohol were just a small part of the problem. It was just the beginning of a little self-awareness. I didn’t like what I was seeing….It was a lot of the evaluating things.” 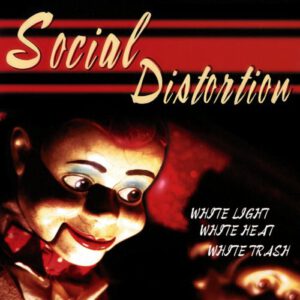 Much of that reflection, and the record’s heavy moods stemmed from the recent passing of his grandmother, who he describes as the “pillar” of his family. The album track “When The Angels Sing,” was written in her honor. “She was the only normal bit of normalcy we had. I can’t even imagine what life would have been without her,” he says. “Also, at that time I was single, and just very hollow inside. I think that that created a lot of emotions—what I was doing as a single man was not getting me where I wanted to be and actually, it was very self-destructive and hurtful to myself and others.”

Twenty years later, Ness is a family man with two grown sons, and can look back and know that he’s overcome many of the challenges he posed to himself on White Light…. “I’m definitely much wiser and more of the person that I want to be, and I’m heading in that direction more….It takes a lot of work,” he says. “At that time, I was just so afraid or so alienated from love and now I have a better [grasp] on it and that makes you a pretty secure person. It also makes you open to a lot and when you’re open to everything, you’re going to receive more.”

At the same time, he acknowledges that darkness and inner turmoil can lead to great art. “It’s that inner conflict and that angst created a fierce and ferocious record. I’m kind of there again. Even though I might have light at the end of the tunnel and see solutions, it’s certainly stirred up a lot and that makes for a great record.”

He also hints that the experience of revisiting White Light… to prepare for Riot Fest might have an impact on the band’s next album. “I don’t typically—I never—listen to my own music,” he said. “Last year we did [an album set] with the 25th anniversary of the self-titled record and it’s very interesting to revisit the songs on an emotional and a songwriting level. I feel like I got a lot out of that, especially being in writing mode. I only expect that this will be the same thing. It’s neat to just go back and reconnect with that emotion or that attitude. It’s been great—We’ve been rehearsing for a week already, and there are a few times I’ve thought, “that’s a pretty good song,” or “I forgot all about that song.”

“I want every record to stand apart from the last one. I think that this one can just be a little bit a little bit more aggressive, and definitely [have] attitude, but that’s just a natural thing for me. I’m chronically irritable and discontent, so that’s what I always write about.”

Before Social Distortion plays White Light, White Heat, White Trash at Riot Fest this weekend, Ness took some time to revisit the album with us, track by track:

Track 1: “Dear Lover”
“I didn’t write that necessarily after a heartbreak…I already felt like that. I didn’t even need to get my heart broke to feel that way. What I was doing wasn’t working. It was almost like saying goodbye to that life because it really wasn’t bringing me happiness. It’s something everyone goes through and I kind of wanted to paint a picture, an accurate picture, of that.”

Track 2: “Don’t Drag Me Down”
“[This song is] particularly relevant today. They say we’re color blind now, but they just find a different way to practice racism in this country, whether it be mass incarceration or figuring out ways that makes it hard for minorities to vote. It’s still here and I’m glad that a song like this can still be played right now. You can hear it now for the first time, and it almost seems like it [was written] now. I wrote it after touring the United States and experiencing racism at punk shows. I got tired of fighting everybody, physically, realizing that that wasn’t really working, that it was going to be more powerful and long lasting, so I wrote a song about it. Obviously, it’s proved true.”

Track 3: “Untitled”
“Either I couldn’t think of anything else [to name it] or, probably, the song was so powerful and meant so much to me that putting a title on it would kind of make it smaller. That was really a song about when I got clean and sober. The guys who were who helped me get clean and sober, [were these] older guys from Pittsburgh. I ended up writing a whole chapter about it in my book (which isn’t done yet). One of them basically became my sponsor in AA and became a real father figure to me. He also really introduced me to doo-wop and old black music, and really helped me connect the dots with roots music. I was 23 years old so having an older guy in his 30s teach me how to play poker, get me into boxing, cars, or whatever, or just having me over for holidays… It was a very pure relationship. Unfortunately, in the same period, when he passed away, I had lost about four other friends within a three-year period so [the song] was kind of about all of that as well.”

Track 4: “I Was Wrong”
“What people related to, I think, was just the vulnerability. That puts people’s guards down. I don’t know this for sure, but I may have been one of the first rock ‘n’ rollers to just say, “at certain times in my life I was an asshole.” This job comes a big ego, “Hey man, I am who I am. Take it, that’s just what I do. I’m Mike Ness. Take it or leave it.” It’s so easy to pull that card, but it’s a lot harder to look inward and just go, ‘You know what? You’re right. I was wrong.’”

Track 5: “Through These Eyes”
“That was more of a song to make people think [about the world around them].”

Track 6: “Down On The World Again.”
“That one is just about having the worst day—I just felt the need to vocalize it. Looking back, I see what a connection that song has to my childhood and how I was brought up, which ultimately affected my outlook on life. It can be very negative when you grow up in an adverse situation, but I’ve learned since then is that can be a positive thing and that it did happen for a reason. Rather than it just being about a bad day it was about being an angry person. I didn’t really realize it, but I learned that as a songwriter or a writer or a filmmaker or a politician or a poet, it’s great to be angry because that’s what fuels you to write. But also, carrying around that kind of anger in your daily life is not healthy. I was fighting the world, but I didn’t even really have a reason.”

Track 7: “When The Angels Sing”
“I was living in New York at the time because we were recording this record. I had just lost my grandmother and my son, my oldest son, Julian, was probably 2 years old but I was not together with his mother. My grandmother passed but a baby is born, and kind of just that struggle between a physical and spiritual world and really just The things that matter in life. It’s not the cars, it’s not the material things. It’s the little things like watching kids play in the yard or being an assistant coach on a Little League team. That’s what means something. My kids didn’t care what frigging band I played in, I’m just dad… It was time for me to wake up and see what I had.”

Track 8: “Gotta Know The Rules.”
“That was based on experiences, learning in life that there’s universal laws. If you violate them you pay a price. Are you willing to pay that price? Like, how you treat people. I was just learning about the melody at that point in my life and how important that is, and vulnerability. A lot of people just aren’t in touch with this kind of stuff. Their job and their car and their career define them and they run on that, especially if they’re in a business that’s competitive or something. It’s cutthroat, and you don’t take time to look at this kind of stuff. Our egos are so powerful, but I feel like the ego is the one thing that humans could do without.”

Track 9: “Crown of Thorns”
“The definition of insanity is repeating the same mistakes over and expecting different results. I knew I wasn’t going to find love where I was looking. At some point there’s an aspect of self care that has to come into play, otherwise it’s never going to change.”

Track 10: “Pleasure Seeker”
“That song’s kind of like the devil and the angel type imagery. It’s an inner conflict of, “this just feels so good. I know I shouldn’t be doing this, but I continue to do it.” Again, just trying to make people think.”

Track 11: “Down Here With the Rest of Us”
“It’s a level playing field no matter who you are. We’re still going to go through pain in life. I think it was kind of a snub at people who think they’re above that. It’s like no, we’re all in this mess together, bro. No one gets out alive.”

Track 12: “Under My Thumb” (Rolling Stones Cover)
“We had recorded that song so long ago and I just wanted to re-record it and do it like we were playing it so well. We had evolved as a band so much, I felt like I wanted to revisit it, re-record it and just throw it in there. [Some] songs that mean a lot to me, I’ve already been listening to them for so long and I just one day go, “I’m going to start playing this.” Me and the band work it out. I want to show everyone how it influenced me so it becomes my own version of that.”