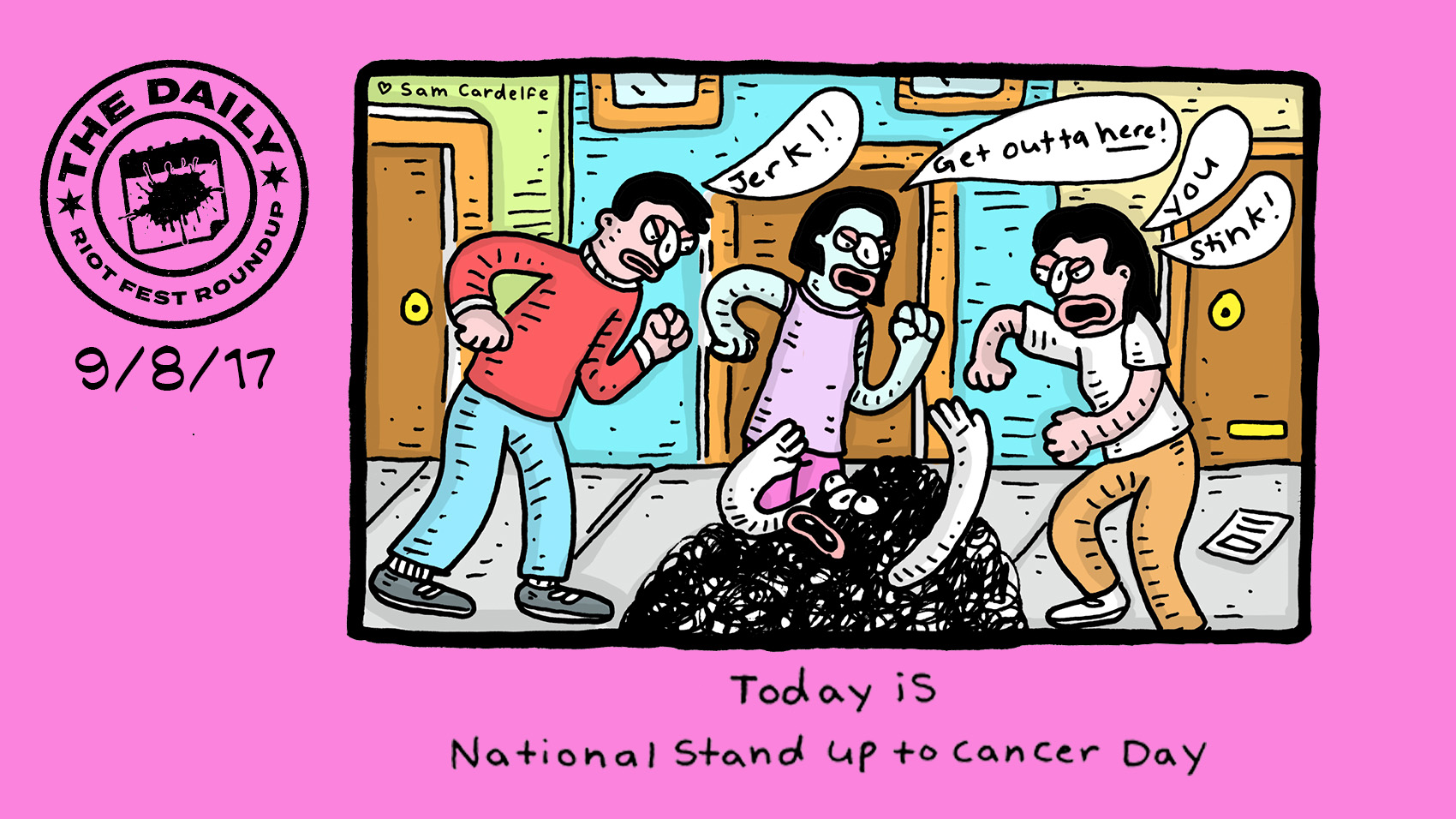 HOLY SHIT, RIOT FEST GARBAGE PAIL KIDS ARE BACK! YES, WE ARE SCREAMING!

We interviewed Murder By Death in advance of their headline set at Würst Music & Beer Fest this Sunday. Head on over and see what they’ve been up to all year.
(SPOILER ALERT: it involves PIZZA).

Today we premiered “Drugs in the U.S.A,” a new single peddled by Radar State, the new band featuring members of The Get Up Kids, The Anniversary and Architects that’s making its national debut next Friday at Riot Fest, and then they’re tearing up the stage at Riot Fest Late Night show at Concord, ahead of Bayside and New Found Glory. Look out for that hole in the stage, Jordan!

James Alex of Beach Slang has released “Hot Tramps” as alter ego Quiet Slang for Amazon’s acoustic something-or-another playlist. He wrote it right after David Bowie died. Yes, it still sucks that he’s gone, but at least now we have this song.

The National release Sleep Well Beast today! The band’s first new album in seven years is being hailed as its best, but you be the judge, jury and executioner of that. Check out The National’s moving performance on The Late Show last night, then stream the new album!

Speaking of things we learned from Consequence of Sound today, they are streaming both of the mighty Deer Tick‘s new albums today, alongside a Q&A with frontdude John McCauley, in which he lays out ten things he loved about making two different albums at once.

Check out the video for “Low Flying Protection” from Guided By Voices‘ new album, How Do You Spell Heaven, which came out last month.

…and here’s the schedule!

One week until Riot Fest… pic.twitter.com/yuX0zBQZCM

Just in case you missed our previous scream on the matter…

Riot Fest Garbage Pail Kids are back. This year, we have 10 new cards for you to collect and yes, they're amazing. https://t.co/4333dybeVX pic.twitter.com/xr9X2XS32J

Second-to-last, and certainly least, don’t forget to come to the Red Scare #PartyBooth tonight at The Riot Feast tonight after Würst Music & Beer Fest to throw pies at the birthday boy, AKA Brendan Kelly from The Lawrence Arms.

Sample the cuisine. Sample the beer and spirits. Sample Beex on his bday. But most of all… SAMPLE THE #PARTYBOOTH. https://t.co/rXBAX9a6WO