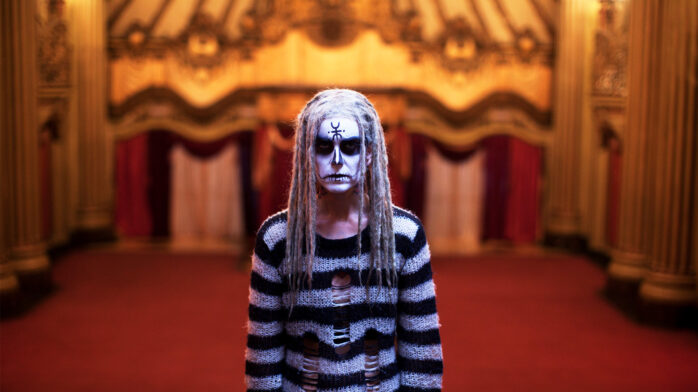 This is the time of year when every listicle generator on the planet imaginatively cranks out X-amount of “must-see” horror movies in honor of Halloween. You know the drill: The Shining, The Thing, Psycho, Rosemary’s Baby, The Exorcist, blah blah blah. But since flipping the script is in the RiotFest.org style guide, we’ve asked eight of our favorite heavy-hitting indie musicians to regale us with their most beloved guilty-pleasure scary movies. While I’m disappointed that nobody took on Child’s Play 2 (or Child’s Play 3, or, uh, any of them), you’ll surely see some of your own horrific taste reflected within (not counting Rebecca from SubRosa, whose take on an undisputed classic is predicated on the humor value of a very… uncommon kind of hardwood).

The Wraith barely fits the only two requirements of this piece. It’s barely horror, though it does loosely hang around the genre (there is an amazing graveyard scene, after all). And it’s not really a bad movie. It came out two years before I was born, so I can’t tell if the film’s painfully blatant clichés were as obvious and laughable then as they are in retrospect. What I can tell you is that watching it now, it’s stunning just how many worn-out ’80s bases are covered. This movie oozes with retro vibes, and creates a surreal pseudo-reality that is totally unique and transportive. Top that off with a killer soundtrack, some legitimately badass car chases/races, and Sherilyn Fenn in her prime, and you’ve got quite an experience. Also, I’m almost certain that the glue-huffing, antifreeze-guzzling henchmen in The Wraith inspired several of the more knuckle-dragging characters from South Park. It gets even more bonus points for being shot in and around Tucson, Arizona.

STAVROS GIANNOPOULOUS (THE ATLAS MOTH): THE LORDS OF SALEM (2012)

This wasn’t Rob Zombie trying to be Romero or Hooper or Craven. This was Rob Zombie doing his best Argento, his best Jodorowsky. Once I had watched it several times, I was blessed with understanding that this is the best Rob Zombie film. I know that to even put Zombie in the same paragraph as Argento and Jodorowsky should make someone call for my head, but you have to look at this from a different perspective. If you compare this to the bizarre Italian horror and the more-art-than-film Jodorowsky fare, I feel as though you will be rewarded thusly. If you’re looking for something spooky to watch in October, yeah, this movie sucks.

The first time I saw The Evil Dead, I was nine-years-old. It was my first horror movie, and I was so dumbstruck and terrified that no other film lived up to it for years to come. It was the first time I realized that I like being scared, and I started wanting to watch everything in the horror section at Erol’s Video Store. Being trapped in the woods in a cabin with evil spirits being conjured out of the earth and people getting stabbed in the ankle with No. 2 pencils and gallons of black blood everywhere? Priceless. I hadn’t seen a grain of comedy in it with my impressionable nine-year-old mind, though. Imagine my surprise when I learned, many years later, that my beloved first true brush with horror was actually a source of mockery, and was followed up with a series of parodies. How dare they?! How is tree rape funny? But anyway, I still don’t think The Evil Dead sucks, even if the whole world thinks so.

It was my turn to pick a movie (which occurs one out of every 20 or so), so I sat my girlfriend down to watch Silent Hill. About five minutes in when the little girl screams, “SILENT HILL” while sleepwalking, my girlfriend said, “Fuck this,” stole the remote and angrily turned it off. If only she would have stuck around, she would have been equally bored, because this movie only works if you played the games; otherwise, it’s a lot of cheesy fan service that will perplex whoever you forced to watch it with you. Unlike the Resident Evil series, Silent Hill is never campy, and is notable for being a film Sean Bean doesn’t fucking die in. While the visuals are great, the acting is mostly shit, and like when we all cum too soon, the movie gives away how bad it’s going to be with that opening scene. I get to choose a movie every second birthday now.

The sequel to 1999’s genre-bending smash hit The Blair Witch Project is not a ghost or witch movie so much as it’s a psychological thriller, and a muddled one at that. It embraces that in real life, people thought the Blair Witch was actually real, and this is actually what I enjoy about the film. I understand it was utterly botched by the studio shortly before release, with tons of last-minute major editing changes, which is probably why it is near incoherent. But this film is highly creative, and so many cool ideas are touched on—the idea of a physical place leaving a spiritual residue, the growth of group paranoia and psychosis, the horror of people watching footage of themselves in a trance state—and it taps into so many good late ’90s character types. It’s better as an idea than as a finished product, but I’ve seen it six or seven times, so I must actually really like it.

Idle Hands stars ’90s heartthrob and current broke-ass Devon Sawa as a stoner (named after Anton Tobias) whose hand gets possessed by a demonic spirit. The hand forces Anton to kill his parents, cops, friends, you name it. Anton gets clever—or cleaver, if you will—and cuts the hand off. Then the real fun starts. The hand continues to wreak terror on Anytown, USA, while Anton and his two recently murdered best friends (now zombies) try to track down and kill it with the help of a Tina Turner-esque demon slayer, played by Vivica A. Fox. This all culminates at the high school Halloween dance, obviously, where an Americana-era the Offspring are conveniently the entertainment for the evening. It’s important to note that the hand only molests two people in the film: a girl wearing KISS makeup having sex in a car, and the principal while he’s on a phone sex hotline masturbating in his office. Idle Hands is the perfect Halloween film for those who are too scared of Evil Dead 2, but looking for something harder than Ernest Scared Stupid.

Bordello of Blood contains all of the things that typically invalidate good film (see: Dennis Miller and Corey Feldman), but makes up for those transgressions with unreasonable plot twists and visual analogues to the Crypt Keeper’s amazing, non-stop puns. Packed with vampires, gore, Super Soakers filled with holy water and HBO-produced affectation, one could only come to the conclusion that the haters on Rotten Tomatoes do not understand, and thus place no value in this beautifully acted, mid-’90s crappy, R-rated smorgasbord. In the end, the glorification of vampire violence and nudity can only go so far. One must always keep in mind the learned observation of the Crypt Keeper while referencing a disembodied mummy at the end of this artistic treat: Quit while you’re a-head.

A beautiful thing about certain corridors of Italian cinema is the hybridization of contemporary Hollywood successes with absolutely no regard for concepts as menial as plot or tenor. This feature by 8½ assistant director Giulio Paradisi (under the applaudable pseudonym Michael J. Paradise) comes off kind of like if you threw Close Encounters of the Third Kind, The Omen, The Birds, and a dash of PCP in a blender. I’ll do my best to lay out the basic plot: Jesus (played by Franco Nero in an absurd wig) sends an alien (John Huston) to earth in order to fight a weird, telekinetic little girl and her weird bird, which would somehow prevent her mother from having another child that is destined to be the Antichrist, or some shit like that. The aforementioned little girl’s mom is dating the owner of Atlanta’s basketball team (played by Lance Henriksen), who is in league with a doomsday cult. Shelley Winters is in it for a bit. Sam Peckinpah is too.. Kareem Abdul-Jabbar has a basketball explode on him as he’s about to make a dunk. Glenn Ford and Mel Ferrer both play major roles in the movie, and a smarter man than me might be able to explain exactly what those major roles are, but even attempting to articulate them is giving me a headache, so I’m just gonna stop. In a post-Tim & Eric and Wonder Showzen world, The Visitor still stands as a testament to the truly bizarre. Watch it and thank me later.