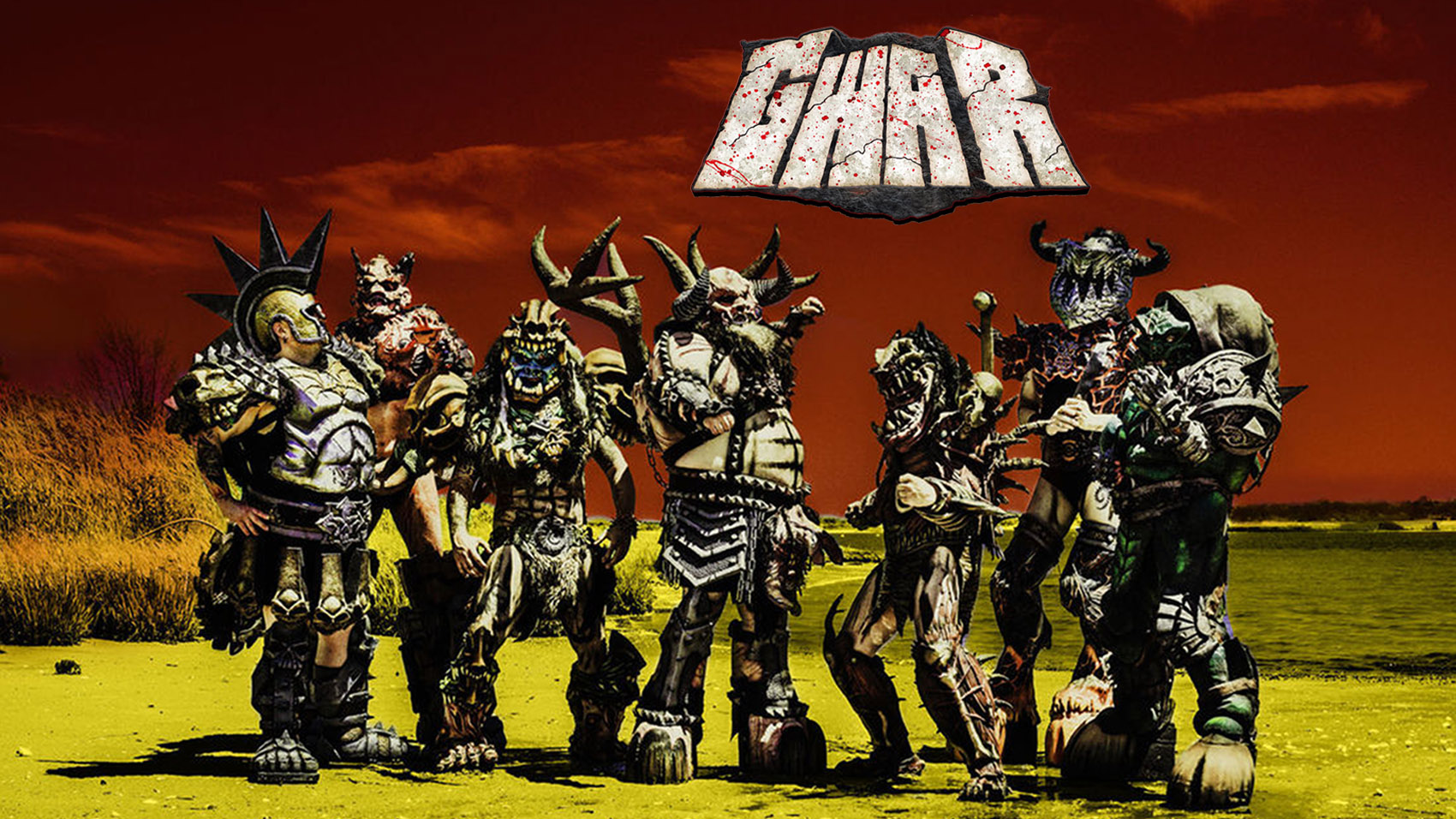 Any conversation with a member of GWAR needs to be taken with a pretty big grain of salt. Members of the thrash rock band are famous for routinely spouting objectionable, highly offensive statements purely for shock value. That’s just their job. This is, after all, GWAR—who’ve been heavy metal heroes, blood guzzling space warriors, and thrash gods since their formation in 1984.

With their new album, The Blood of Gods, out today, GWAR continues to take on deliciously controversial subjects like politics, religion, and, who else—that nasty orange guy who’s always in the news. But it’s also GWAR’s first album without lead singer and longtime frontman Oderus Urungus (Dave Brockie), who died in 2014. Brockie’s death left the band in emotional freefall for a while, and The Blood of Gods marks a triumphant return for GWAR and its ever-evolving lineup. But we’re under duress, so don’t take our word for it. See for yourself…

Riot Fest caught up with GWAR’s acne-prone lead guitarist and backing vocalist Pustulus Maximus (Brent Purgason), while he was on a music video set. He was surprisingly mellow.

We discussed Oderus’ impact on GWAR, Pustulus’ skin-care routine, and how the band continues to attract a younger fan base.

RF: How are you doing tonight?

RF: I thought your voice would be more like a growl.

PM: Well I mean normally I’m miserable, but today I’m wonderful cause I’m actually sitting back watching other people work. I’m just sipping on lemonade watching them sweat. We’re actually making a music video for one of those songs on the new record right now.

RF: Oh that’s a good one. What’s the video going to be like?

RF: Nothing wrong with a little bit of scat sometimes.

PM: You gotta keep it in there. You don’t want anybody to think that we’re going soft.

RF: What’s the theme of The Blood of Gods?

PM: The Blood of Gods is a sordid tale that basically encompasses specifically what’s happened to us in the last three or four years, but ultimately, I think the trials and tribulations of the last seven, to be honest. It’s the tale of us losing Oderus Urungus. We had to forcibly learn how to become a band once again. And it also tells the tale of the war on GWAR, how we sold out to a large conglomerate and wrote jingles for a fast-food restaurant. It all makes sense when you buy and listen to the record all the way through. But that’s the gist… Humanity revolted against us, and we spit right back at ’em.

RF: So are you guys coping OK without Oderus?

PM: Yeah. Oderus Urungus was unpredictable. You never knew what you what you were gonna get. I mean, you always knew you were gonna get something good. But it took us a while to learn how to function without him. He was an integral part of this band, and still is, in my opinion.

RF: Do you think the band would ever refill that character?

PM: Well no, ‘cause Oderus Urungus is gone for good and I don’t think we’ll ever see him again, unfortunately. Not unless GWAR becomes animated. Then maybe.

RF: If GWAR becomes animated, then you could do anything.

PM: Yeah. Or I could just do like Tupac and we could have a hologram, an Oderus hologram on stage.

RF: How was your set at Riot Fest?

PM: Oh it was great. We had plenty of fun. It was one of the best Riot Fest performances we’ve done yet. And actually, we have decided, since the show went so well, we’ve broken up. GWAR is no more. And the reason for that breakup is because next year Riot Fest will pay us to reunite and we’ll play the main stage.

RF: Wait, you said GWAR is broken up?

PM: Well yeah, you know. It seems like all the headliners at Riot Fest have broken up at some point or another. Descendents, Jawbreaker, Misfits, you know… GWAR. So GWAR has officially broken up so that next year we can get more money and a better time slot.

No no no, I definitely appreciate that Riot Fest brings us back, year after year. That’s pretty honorable of them.

RF: Have you guys ever really broken up?

RF: You don’t want to be there?

PM: No I don’t want to be here. I wish we would break up for real. That would be great for everybody. I think the moods would improve. We’d all get real jobs, and I think we could find happiness at the end of the rainbow if we broke up, but I don’t think that will ever happen.

RF: People love going to your shows. It’s just such a huge party. Do you think the fans like getting sprayed with all that… stuff?

RF: I saw an interview with Blothar in which he said he was going to sue everyone. What does he have against people?

PM: I think being a lead litigator would be a good job for Blothar. It’s how some people make a living—you just sue people. We could sue Kathy Griffin for taking away our ability to laugh.

RF: I don’t know why she decided to do that whole bloody-head joke.

RF: Is the whole band against Trump right now?

PM: I’m pretty sure that every musician ever is against Donald Trump, unless you’re Ted Nugent or Kid Rock. You got like two out of 2 million bands that like that dude. I mean it’s… No. No. Nobody likes that guy, nobody with a brain, anyway. I mean, hell. I shoot guns and drink and drive all the time and I still don’t support that dude.

RF: Who’s wearing that Donald Trump costume in the band’s video announcing the new album – was that a member of GWAR?

PM: That’s really him. He gets on stage all the time with us, trying to steal our spotlight. He just keeps coming back.

PM: Yeah, well, it’s cause he has a very good health-care plan.

RF: It’s been more than 10 years since GWAR’s last live album. Any chance you’re going to put together a new one?

PM: I’m not sure. We haven’t really ever discussed that. A GWAR [show] is such a… it’s something to see. And I think just doing audio for something like that doesn’t do it justice. Our live shows tell a story. You have to see that shit.

RF: GWAR continues to have a large following. You’re still filling the seats. How do you stay on the fringes while growing your fan base?

PM: As the fans get older, of course you gotta make sure you get new fans. I think a band like GWAR who’s been exposing ourselves for years, now we can expose ourselves to younger and younger children—fans, young adults. We got the opportunity to go on Warped Tour this year and expose ourselves to millions of kids. I think they liked it. The goal is to bring younger generations into the crowds. And it’s not that we really care about having an extensive fan base, it’s really just, once your fans get old and geriatric, then you gotta find places with wheelchair access and everybody wants to drink wine and your fans start looking more like they want to go to Margaritaville, and not a rock concert.

RF: You have a lot of blue stuff on your face. How do you take care of skin like that?

PM: It’s not very good. I have to use Proactiv, sometimes just cow shit, whatever I can put on my face that soothes the pain of these awful, awful acne sores—I mean, just wear a shit-mask.

RF: I hope you go to a private room to do that.

PM: You just gotta make sure that whoever’s shit you’re rubbing on your face, that they have a decent diet. You wouldn’t want it to be Beefcake the Mighty’s shit, that’s for sure.

RF: Is there anything unusual on your tour rider?

PM: Unusual to everybody else. We just ask for rare guitars, rare instruments. Every once in a while we’ll select a few teeth that we need to have missing on a prostitute and we try to go find them—men one day, women the next, things like that. That’s what a GWAR rider really consists of—illicit substances and a fall guy. So there’s always gotta be somebody you can blame all the mistakes on after the show.

Head on over to GWAR’s website to buy The Blood of Gods. If you buy it from some shit online middleman, and not directly from the band itself, there’s nothing we can do for you. I’d start saying “goodbye” to family at that point.

GWAR is on the road through the end of the year. Check here and see if they’re coming to your hometown. If your hometown is Chicago, you can apparently catch their big reunion on Riot Fest’s main stage next year.