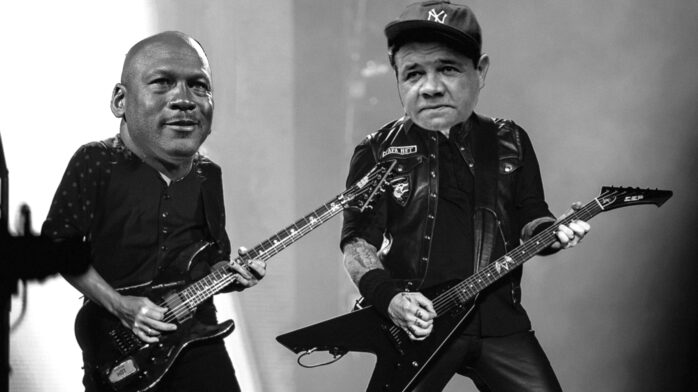 Heavy Metal Records And The Athletes Who Love Them

Perhaps the most prominent athlete metalhead who never was is Lars Ulrich. Son of professional Danish tennis player Torben Ulrich, a devoted Lars followed in his father’s footsteps for a minute or two during his formative years. But when the family moved from Copenhagen to Newport Beach, the pond just got too big, and Lars’s talents were diluted amongst a glut of better tennis players. So he backed off, re-found heavy music, and placed a now-famous newspaper ad that resulted in an inextricable partnership between he and James Hetfield. So began a Metallica story that peaked with the 2004 pseudo-therapy-session documentary Some Kind of Monster. Or perhaps it peaked a little over a decade earlier? It’s hard to tell at this point.

Anyway, had Lars made a go of it on the court, what might’ve been his pre-match heavy-metal soundtrack? He’s declared early love for Motörhead and Iron Maiden, but how would his tastes have evolved (or devolved) as an athlete without Metallica? Today, there’s a smattering of metalheads in professional sports dropping deep-cut names like Death Angel, Children of Bodom, and In Flames—and then there are those who rep Ratt and Van Halen, which can be OK too.

As you can probably predict, a jock’s metal allegiances around game time boil down to some variation of “It gets me pumped up,” which is pretty fair because Exodus’s Bonded by Blood does indeed sound mainlined with raw adrenaline and back sweat. But then there’s the metalhead athlete who, for example, hails from Finland and loves Nightwish because the band formed 45 minutes from his hometown. So what are the merits of an athlete’s beloved metal albums in relation to the sports (and positions) that he or she or they plays? Even more specific, what makes Ride the Lightning resonate with a closing pitcher for the Washington Nationals? Lars wants to know.

Relief pitcher Sean Doolittle, whose entrance music from the bullpen is “For Whom the Bell Tolls,” would be the one to answer that last question. In a 2015 Decibel article written by Matt Solis, the former Oakland Athletics closer and current Washington Nationals reliever—and poster boy for metalhead baseball players everywhere—opines about his favorite metal records, calling out early Metallica, and in particular At the Gates’ Slaughter of the Soul. He tells Solis about the latter, “I put it on the other day when I was walking to the ballpark and I was just in the zone… nobody was getting in my way.”

For sure, the Swedish band’s death metal on that 1995 album is filthy and ratty enough to summon baleful hate (and power) towards hitters—thanks a good deal to the gurgling vocals of Tomas Lindberg—but it’s also melodic and crisp enough for a pitcher to stay in rhythm and keyed into a routine. And for the relievers who are so often beholden to the delicate balance between idiosyncrasies (read: superstitions) and hyped-up adrenaline, keeping focus is paramount. There’s as much triumphant guitar harmony as there is in-the-trenches thrash on Slaughter of the Soul, no doubt helping a metalhead like Doolittle stay good and level.

While there are definitely other metalheads in baseball—like former Baseball and Mullet Hall of Fame catcher Mike Piazza, who loves both Dokken and Ratt, and resident eccentric starting pitcher Trevor Bauer, who appeared in an Amon Amarth video—hockey has its share too. Considering that blustery nordic nations are fervently invested in both hockey and metal, it should make sense, for example, that Boston Bruins’ Finnish goaltender Tuukka Rask is a big fan of the symphonic metal of Kitee, Finland’s Nightwish. In a 2013 Esquire piece by Mick Stingley, Rask describes how he attempted to make converts out of his teammates: “I tried to play [Nightwish] in the locker room and people were like, ‘What the fuck is this?’ because it sounds like opera singing. It’s pretty incredible how the band mixes that kind of singing with heavy metal.” 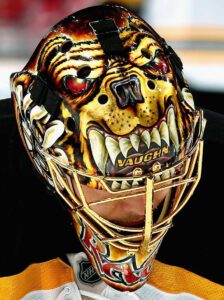 Indeed, the compressed symphonic metal of 2004’s Once is both sleek and decadent, seemingly composed to pair well with pirouettes at one turn and clean, swift checks against the boards at another. As Rask explains, the vocals—here from Tarja Turunen—are theatrical and bombastic, not unlike his extreme-metal goalie mask that in at least one version features a red-eyed and demonic bruin, fangs exposed. Nightwish are often as doomful as they are delicate, which in Finland makes for a wildly popular platinum band—and definitely something else Rask is happy to defend.

Finally, take mixed martial arts fighter Josh Barnett, who’s as metal as they come—and, boy, let him tell you about it. In a 2014 article for FOX Sports by Damon Martin, Barnett asks, “How many of these athletes have ever been to [Maryland] Deathfest? I’m going to guarantee you that’s a big fat zero besides myself.” At the time, he was chopping away at his fellow athletes who’d been nominated for Most Metal Athlete by Revolver for their annual Golden Gods awards. And he probably has a decent point.

Too many times radio-metal bands like Avenged Sevenfold and Disturbed are rattled off as legit. Barnett instead reps names like Goatwhore and Cattle Decapitation, the latter of which blends grind-style tremolo picking with rapid-fire kick-drum rolls and growls conjured from a subterrestrial underworld. Their most recent record, 2015’s The Anthropocene Extinction, is devastating, sometimes spontaneously combusting into a mess of hellish soloing and machine-gun rhythms that would match very well with pummeling someone’s skull with fists, elbows, and knees inside a 750-square-foot octagon-shaped cage. As far as sport goes, MMA teeters on the edge of brutality, with roundhouse kicks that sometimes look like they could split head and neck from torso. Cattle Decapitation is less subtle.

High-principled metal, the kind that should scare you just a bit, seems like such a natural aperitif for athletes to down before jogging in from the bullpen, or scraping the ice in front of the net, or taping up their hands. The fixes of adrenaline would be too healthy and too large to turn away. Certainly the records would say something about the athletes’ performances and styles. And, still, you can’t help but wonder what Lars would have gravitated towards. If he had stuck it out with tennis, traveled the tour as a pro, and never placed that ad, what would have gotten him juiced before a match? It seems probable that somehow his answer would inexplicably still end up being “Metallica.”