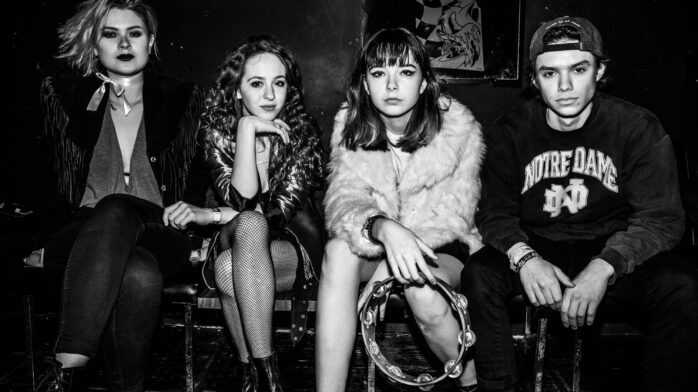 The Regrettes are a punk rock band from Los Angeles. Comprised of teenagers and having only been a band for a couple years, you’d think that they’re relatively inexperienced when it comes to the music industry. However, after having so far survived the brush fire that is the major label ecosystem, the members of Regrettes are are wiser, older souls as a result.

Much the same can be said about Riot Fest’s current editorial endeavor. We’re relatively new to this process, and being thrown into this particular fire has forced us to learn a bunch of new things on the fly. Since this was merely the second interview that I’ve ever conducted in my life (Fishbone being the first), I was hoping that the Regrettes could dish out a few pointers. I caught up with them after their set at Summerfest in Milwaukee last June, and they were quite helpful—and charming—indeed. I learned a lot, and am happy to share the bounty.

RIOT FEST: Do you feel like y’all have been treated with respect by the media overall? Any particular examples in either direction?

LYDIA NIGHT (LEAD VOCALS, GUITAR): No. Well, a lot of times we’re treated with respect, but I’d say equally we get a lot of interviewers who, I think, don’t really know what they’re doing, so they ask things that I don’t think that they realize are offensive, but are just are annoying for us, because we’re so used to people focusing on our age, and our sex.

RF: What’s the most annoying question you get? Like, what do people ask where you think to yourself, “I can’t believe somebody fucking asked us this question?”

But I think it’s different if someone’s asking, like, “Do you ever have to deal with people patronizing you because you’re a woman in the music industry?” That’s a fair question.

RF: Do you ever have to deal with people patronizing you because you’re a woman in the music industry?

LN: Yeah, we do get patronized!

RF: Sage, the next interview we do will be about the music store employees that we don’t like.

RF: Let’s yang that yin though, there’s got to be some good media-types, right?

LN: I think, honestly, most of the time when we do a cool, legit publication [we’re guessing she means as opposed to a small blog, or a music festival’s magazine startup. -RF], usually they know what they’re doing more, so they are just better at it.

SC: Sometimes people are more aware of what’s appropriate and how to talk to people. Other people are unaware of how they sound, and they’re not going to learn because they don’t care.

RF: I think it’s important to be able to adapt to the other humans in life, and especially in journalism.

LN: Yeah, completely! When you’re a journalist, especially as a writer, you need to feel out a person and feel out what—ya know, I don’t know, usually they just have to be smart. Don’t be an idiot.

GG: I think it’s just sometimes, even interviewers will hit “record” and ask a question, and then we’ll be talking, and they just look around…

LN: And they don’t give a shit!

GG: Yeah, they’re not listening to anything we’re saying, they know that they’ve hit record and they’re gonna [analyze the content] later, and it’s a little disengaging. I also think it’s all very unintentional when they’re demeaning. They don’t mean to be, they don’t really realize it.

LN: When it’s the same question over and over again?

RF: When you’ve got a two-hour block of phoners from the road, thinking “Is this how I get to spend my day off?”

RF: What do you wish more journalists would ask you about?

MM: I think questions that are not the conventional questions, like “How did you meet?” Because there are a lot of interviews where we already answered that, so you’re just asking the same questions, which is fine, and I understand…

RF: No, what do you wish more journalists would ask you about?

MAXX MORANDO (DRUMS): I wish journalists would ask us questions that aren’t the same ones that we get all the time. There we go!

MM: Just, you know, fun questions, I don’t know. Questions that nobody knows the answer to, maybe?

MM: Yeah, but there are so many articles with that already.

RF: They’re journalists, they can Google it, and move on!

GG: I’m sick of saying how old I am, because most bands that we’ve read interviews with, they do not have to say their age. It’s not a requirement, and I think that’s kind of rude, honestly. It doesn’t change anything.

LN: It doesn’t affect anything.

GG: No one would go to a band who wasn’t young and ask how old they are. And I understand that they’re curious about it, but I still think…

LN: But when also every headline is Sixteen-Year-Old Fronted Band… like, shut up! I think my question might be the same thing—the age thing. Or, I hate when journalists just ask the same exact question in a different way, or aren’t able to…

RF: You mean in the same interview?

LN: Yeah, in the same interview. But also, if they ask a question and we end up accidentally answering another question for later on, then don’t ask it! You can cut a question!

RF: I just did that! I just cut a question!

SC: See, you’re getting it!

RF: It’s all of us vs. the world out here. Anyway, I love the cover of “Fox on the Run” that you did for AV Club Undercover.

RF: I love AV Club, and I love that new Undercover set.

LN: That floor is like squishy tile, it’s crazy.

RF: Do you have fun doing sessions like that?

GG: Yeah, I think it’s a lot of fun. We get to do a few takes sometimes, and we get to learn a new cover. I like those.

RF: Do you get to work on new material?

GG: Yeah, it’s a lot of fun. Especially because that time, we got the song while we were on tour, we had a few days off in Ohio, and it was a fun thing to do to pass the time.

RF: So if your label is going fill your schedule with promo every day, it’s better if you get something out of it?

LN: Yeah, it’s so much more fun when it’s something interesting, where we’re not just going in to do a couple of our songs. I love that with AV Club, you get to pick a cover, and it was something that none of us knew. It’s fun when it’s different. It kinda wakes you up, and it’s fun, too.

RF: You guys seem to have a lot of energy, but do you ever feel like this extra promo is just too much strain on your voice, time, or otherwise?

LN: Well I actually have vocal nodules, so the last tour I couldn’t talk the entire tour, which was a different thing. [Sage nods her head]

RF: Let the record show that Sage nodded her head.

LN: I love to talk. I’m a very talkative person. So, I had to put my foot down and say “I can’t do any press this tour.” We did a little bit, but they took over a lot of it [points to bandmates].

SC: You could see how much pain she was in, and struggling.

GG: She was communicating without using her voice.

RF: What are three steps male music festival attendees can do to be more respectful to women at festivals?

SC: Don’t come to our merch booth and say things to us that can be demeaning to women or sexual, especially if you’re drinking. There’s no excuse to say [stuff] like that.

LN: Don’t ask to buy me a drink. First of all, I’m underage. Second of all, I’m not 21. Third of all, fucking ew. I don’t want that. This happens a lot: If you’re talking to me, don’t touch me. If we’re taking pictures, don’t grab my hip. That also happens a lot.

SC: Lydia and I were up close for Twin Peaks at a show we did with them, and there was this fucking drunk guy being creepy.

LN: I told him we were dating and he was like “Oh shit!”

SC: He was standing by the mosh pit pushing into people. There were younger girls, maybe 14 or 15-years-old, and he was standing there waiting to grab them when he got pushed. Don’t do that!

RF: What are three things female music festival attendees can do to be a better influence on the men around them?

LN: Don’t be scared for standing up for yourself. It’s really scary when a dude is being really creepy to you. That’s what happens to me when I get cat-called. I feel very small and freeze up. But I’m getting a lot better at being unapologetic and telling someone to “Fuck off.” Even in a nice way—don’t touch me please.

MM: I feel like for the dudes, if you see something going on you should say something instead of waiting there and watching what happens. A lot of people see stuff happen—girls and guys. If one person goes in, the next person goes in.

RF: Are you excited for Riot Fest?

RF: Who are you guys excited to see that weekend?

LN: Well, I was excited to see Paramore, but we’re not going to be there for that. But, isn’t Lorde playing?

RF: No. Lorde is not playing at Riot Fest.

GG: I’d love to see Queens of the Stone Age.

LN: Are they playing too?

LN: Who? You listen to GWAR?