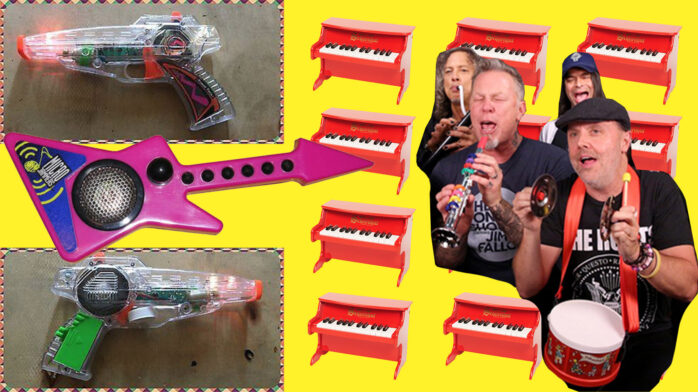 Has Using Children’s Toys in Rock Songs Ever Not Sucked? 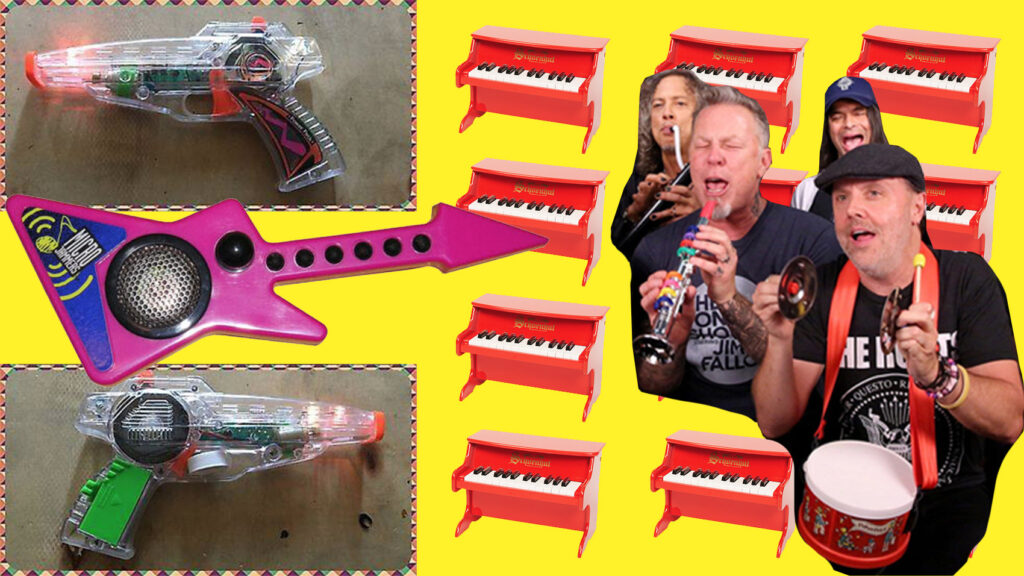 I was born shortly after Lee surrendered to Grant at Appomattox, so I have a stick and wooden hoop, mouth harp, and near-mint G1 Optimus Prime proudly displayed in my office. What I’m saying here is, toys are great. Nostalgia is, like, sometimes great. Toys in songs made for adults — specifically heavy songs — now, there’s something we can all disagree about. I mean, you’re allowed to have unconventional instruments in heavy songs (those were part of the agreed-upon terms at the courthouse, I was there). It doesn’t make it right (see: Jackyl, Korn, Korpiklaani), but you’re totally allowed to. Toys, though — it’s very hard to tread that fine line between “mildly clever” and “deserving-of-death twee.” Although there are certainly a zillion (okay, maybe four) other examples that you’ll helpfully refresh our memories with via Twitter, here’s our totally topical and not-at-all arbitrary ranking of five bands who did not put away childish things in their heavy compositions.

From Slayer-esque metalcore to proggy space-rock — and eventually an unusual combination of the two — Cave In has given us plenty of unique looks over the years. That restless creativity applied to their covers as well. Inspired by “Starfield Road” on Sonic Youth’s 1994 LP Experimental Jet Set, Trash and No Star, guitarists Stephen Brodsky and Adam McGrath incorporated toy ray guns not only into a recorded cover of Bad Brains “I Luv I Jah” (first video below), but also on multiple live versions of Led Zeppelin’s “Dazed and Confused” (11:45 of second video). “The noise coming from the gun, along with its vibrating feature, would create instant heavy drone when placed on strings near pickups,” McGrath explains to Riot Fest. “We used them plenty live on noise jams, etc.” Intrigued potential copycats, take note: McGrath doesn’t remember the exact names of the guns, and is fairly certain they’re no longer manufactured.

VERDICT:
DOES NOT SUCK; BOTH, IN FACT, RULE

Smell the Magic and Bricks Are Heavy are the albums that everyone remembers as definitive sneering, feminist-forward grunge-metal powerhouses, but L7 hit an endearingly ugly, almost troglodytic stride on lesser-regarded ’90s LPs Hungry for Stink and The Beauty Process: Triple Platinum. The latter gave us “Drama,” a righteous downtuned stomp augmented not only by cheerfully asinine lyrics (“My piss is yellow and the sky is blue / we got a drama”), but at 2:18, an extended solo entirely generated by creative button-mashing on a Micro Jammers toy guitar. As inimitable frontwoman Donita Sparks told Rolling Stone upon the album’s release in 1997, “It was out of complete frustration, like, ‘Fuck it, I can’t play these riffs, let the Micro Jammers do it for $1.99.’”

VERDICT:
DOES NOT SUCK, TOTALLY RULES

Gizmodgery, like most of Self (and L7’s late-period) output, is surely available in your local brick-and-mortar dollar bin. The brainchild of Tennessee native Matt Mahaffey, the project churned out some of the most atypical, charming, catchy and crazy-obnoxious (often all at once) alt-pop of the ’90s. Mahaffey tested the limits of cutesy self-indulgence on 2000’s Gizmodgery, assembling an entire album recorded with children’s toys. He even had a Schoenhut toy piano made especially for the record. This is some madman auteur shit that is not at all for everyone. Try either the strutting original “Trunk Fulla Amps,” or his take on the Doobie Brothers’ yacht rock classic “What a Fool Believes” below. You’ll know within five seconds if it’s your bag or you never want to hear it again.

VERDICT:
SOME SUCKAGE, SOME RULEAGE

THE WACKIDS — “KILLING IN THE NAME”

The Wackids is three French dudes with a YouTube channel who do “Rock ‘n’ Toys” versions of hits from such luminaries as Michael Jackson, the Beatles, Joan Jett, Metallica (“Enter Sandman” again, for the love of Christ), and of course, Rage Against the Machine. This is the sort of thing you drunkenly pay $5 to see at P.J. McDingleberry’s during your freshman year of college before getting kicked out after five minutes. At least this version mercifully truncates the over five-minute original to 90 seconds of “showmanship.” Points deducted for not programming Zack’s lyrics into Teddy Ruxpin, for not performing naked with “PMRC” on their chests, and for simply existing.

VERDICT:
SOME OF THOSE THAT PLAY ALL-TOY COVERS IN HOODIES AND PLASTIC AVIATORS ARE NOT THE SAME THAT BURN CROSSES, BUT THEY CAN STILL SUCK

Cave In L7 metallica rage against the machine Self