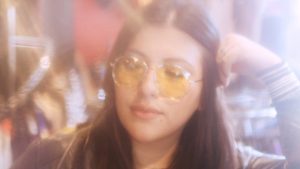 When Bianca Garcia grudgingly signed up for a photography class her freshman year of high school, she wasn’t setting out to become one of Chicago’s most high profile fashion photographers. She just needed to fill a gap in her schedule.

“It was an accident,,” the 22 year old explains during a quick phone call between shoots. “But it was the best mistake ever.”

Garcia was immediately attached to her first camera, a Nikon D3000. “At the time, I thought it was the best thing in the world,” she says. “I remember thinking like, ‘This is it! This is the start of my life!’” It didn’t matter that it was puny and underpowered next to her current camera, a Nikon D700, or her dream machine, the Canon 5D Mark III; it opened her eyes to the everyday beauty everywhere around her, and the unlimited possibilities for capturing that moment.

“I shot everything, anything, and I kinda kept taking pictures after that. And now we’re here!” she laughs, reflecting on the circuitous route that lead from photo editor of her high school yearbook to a career shooting for blogs like Hypebae and Pigeons and Planes, as well as designers like OG Brand, 10.Deep and Chicago native Ron Lewis.

Studio access and resources that came with her four year stint studying Commercial Photography at Columbia College allowed her to develop her craft, but it was her relationships in the Chicago fashion scene that kept her from returning to her native Houston after graduation. After noticing her work on Instagram early last year Jugrnaut owners Manny Muscles and Roger Rodriguez—a pair she calls her “best friend” and “like a brother”—hired her to shoot an editorial and brought her on as an intern.

Her role transformed when the duo behind the cult streetwear line hired her as head photographer. Ten years of Jugrnaut’s history in the streetwear scene provided a launchpad to create connections the industry, and the store is also the fertile soil that’s allowed her to develop a wide web of roots in her adopted city. “They took me in, and they’ve definitely made this a home for me,” she notes with a deep appreciation evident in her voice. ‘They made me fall in love with Chicago all over again.”

The store’s relationships with artists like rapper MadeinTYO have also given Garcia the opportunity to form ongoing relationships, not to mention hookups with photo passes whenever a tour comes through town. Along with Jugrnaut’s habit of casting up-and-coming local artists in their lookbooks, she’s becoming just as well known for shooting musicians as models. “It’s important to keep the culture alive in Chicago,” she says. Jugrnaut’s raucous, high-energy parties also allow her to network locally, snapping photos of Chicago’s creative class and streetwear OGs at concerts and parties thrown in partnership with musicians like Bigbodyfigi and Boi Jeanius.

Don’t just chalk her up as another Soundcloud photographer snapping disposable camera shots in green rooms hazed with blunt smoke, though. The omnivorous eye she cultivated as a teenager drives her to find what’s interesting in any subject, not just one that’s popping on the charts.

“If I could shoot every genre of photography, I would love to do that,” she muses, reflecting on her already packed schedule. “I really wanna try to get into more street photography, just like, everyday life, everyday people.”

Even in the studio, though, her work shows an ability to connect with people, and not just their looks. Before sessions with someone she’s never met, she delves into their social media, hunting for their preferred angles. “During the shoot, I really like to talk and get to know the subject beforehand. I feel like you, if you don’t have that personal connection with someone, the photos are definitely not going to turn out really great.”

Garcia prefers models who “aren’t afraid to be super weird, do whatever in front of the camera, not shy” and has met her match in subjects like Jada Denae, Two-9 member Key! and the West Side Pivot Gang rapper Mfn Melo.

She’s known for color-saturated studio portraits that she brings to life during a painstaking editing process, where she eliminates digital grain to keep her images vibrant and bold. Her compositions naturally draw the eye to the faces of her subjects, their skin and clothing suffused with the light of an Elinchrome Octabank. “Colored backgrounds are really cool, but white doesn’t take away from the object or the person you’re shooting,” she says.

For outdoor shoots she takes to the streets, wandering neighborhoods like Chicago’s street art and poke bowl capital Wicker Park. “Whatever I see, we’re just gonna shoot it,” she says, decisively. “I feel like when I plan my shoots too much, it doesn’t end up how I want it to look. Every person’s so different. You can’t just say, oh, I shot this person at this blue wall last week, this is gonna go great with this person. It’s different for everyone.”

While she’s open to working with as many types of people as possible, Garcia’s most comfortable in diverse groups that include fellow women and people of color–spaces where she doesn’t have to worry about code-switching or being condescended to while just trying to get her job done.

Garcia recently had the chance to show up for her community on a larger scale when family members and friends in her hometown of Houston were stranded by Hurricane Harvey evacuations, many of them with no homes to return to.

“I felt that I needed to contribute somehow,” she says. “I knew that you could write checks and give money, but there were still a lot of people who needed goods — so I did a drive through the store. We had so many people come in, give supplies.”

After a grueling drive in a donated rental car that took twenty-four straight hours, she arrived in Houston with much-needed baby formula, pet supplies, hygiene products, non-perishable food and other supplies for grateful recipients.

Bianca Garcia is always willing to go the extra mile, even literally, to connect with her community as a whole through her work. Whether snapping pics at Jugrnaut’s meet and greets or photographing Chicago’s next big rap artist before they break, she’s not just consuming her adopted city’s culture, but helping to cultivate it. 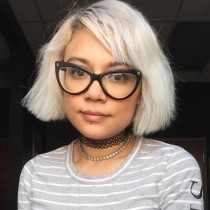