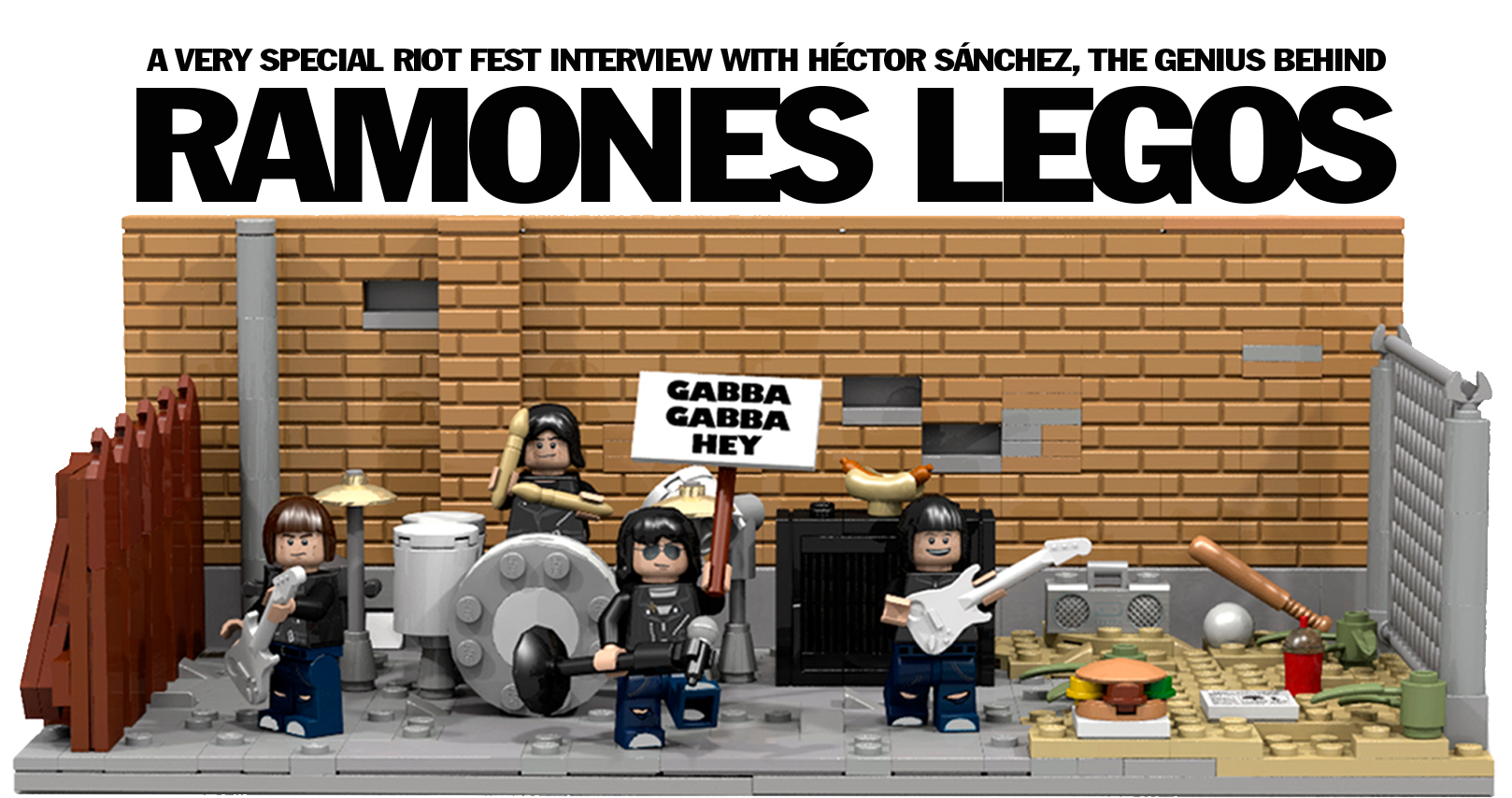 While we’ve all reluctantly accepted the fact that the Ramones can never reunite in the flesh, they still might be able to get back together in the plastic. Right this minute there’s an internet campaign going on to immortalize the band as Legos, posing with their gear and looking punk as hell for all eternity. This is part of the Lego Ideas crowdsourcing initiative. If you haven’t already, please join us in backing this project immediately. We’ll wait.

Welcome back. Madrid-based designer/writer Héctor Sánchez hopes his 450-piece digital set, complete with mini Ramones Joey, Johnny, Dee Dee, Tommy, and Marky, as well as a drum kit, two guitars, eight album covers, a brick wall background—and other adorably tiny accessories like a boombox, baseball bat, and a “Gabba Gabba Hey” sign–will eventually go into commercial production. To even be considered for an invitation to the dance, the project needs 10,000 votes, as per Lego Ideas’ bylaws. Do you wanna dance under the moonlight? Then vote, baby, all through the night.

Riot Fest asked Sánchez, author of Paul is Dead and Other Rock Urban Legends and Kubrick on the Moon and Other Movie Urban Legends, why he chose the Ramones as a conduit for merging the seemingly incompatible worlds of punk rock and plastic blocks. 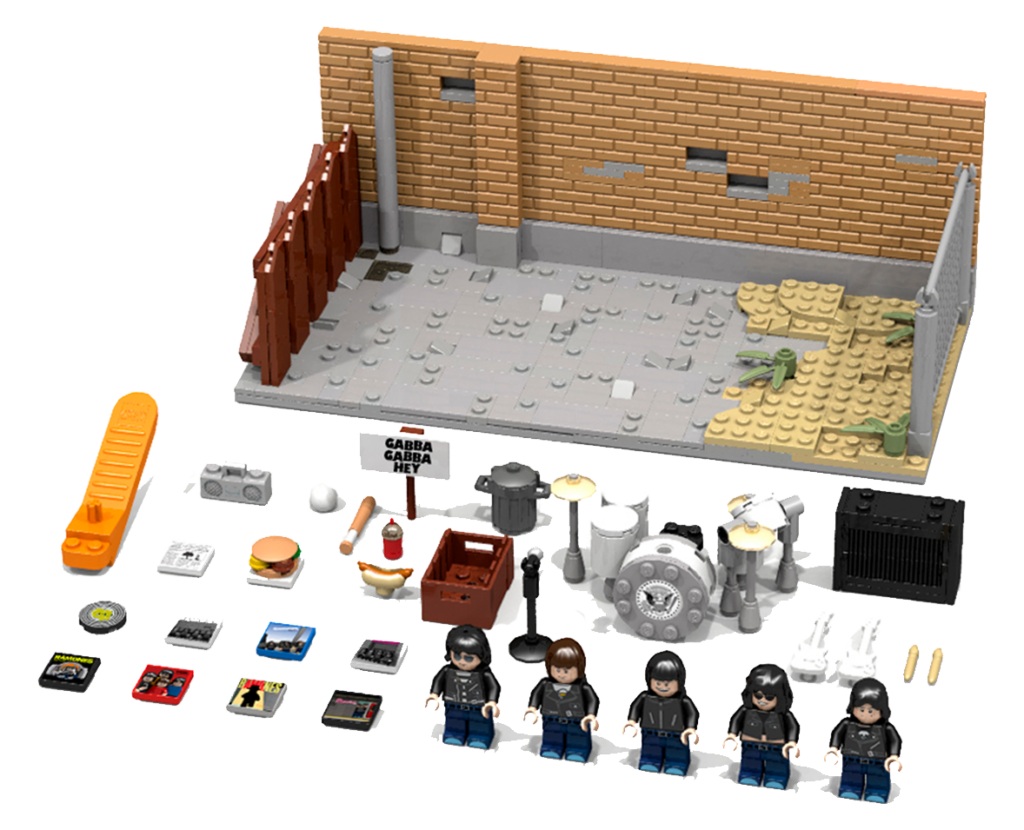 RIOT FEST: Why did you put this project together?

HÉCTOR SÁNCHEZ: I love Lego and I love classic rock bands. A year ago, Lego commercialized a Beatles set, the Yellow Submarine. It was a Lego Ideas project and it inspired me to create an iconic scene from another iconic band. I love the Ramones’ style and I thought I would like to see them in the form of minifigures.

RF: Why did you choose the Ramones?

HS: I love a lot of classic rock bands and artists: Bruce Springsteen, Van Morrison, Elvis Costello, the Beatles, the Rolling Stones, the Who, Pink Floyd, Led Zeppelin, Creedence Clearwater Revival, Blondie, the Clash… I chose the Ramones because their appearance is very recognizable. There is also a lot of Ramones’ merchandising, so why not a Lego set?

RF: What do you like about the Ramones’ music?

HS: The formula they use in their songs is perfect. Three chords, one minute. Their songs are very direct and their lyrics are very funny. And I love the experiment with Phil Spector.

RF: How long have you been a fan?

HS: I’m not sure, maybe since I was a teenager. The first songs I heard were “Rock ‘n’ Roll School” or “Do You Remember Rock ‘n’ Roll Radio?”

RF: How did you create the Lego?

HS: For the design of the model, I used the software Lego Digital Designer. Then I used rendering software to create a realistic appearance. Last, I spent a lot of time with Photoshop to make the torsos or to complete the album covers.

RF: Do you have actual Lego pieces right now?

HS: I didn’t build the project with physical bricks; the construction is made with Lego Digital Designer. This program has a lot of Lego pieces and heads with different facial expressions to choose from. The hot dog, the bat or the sign are Lego pieces, but I used Photoshop for the “printed” pieces like torsos, legs and the “Gabba Gabba Hey” text. I had already designed more complicated projects for Lego Ideas, so it was faster and simpler–like a Ramones song!

RF: What was the hardest thing about creating this project?

HS: The hardest thing was to decide the scenery. I wanted the brick wall to recreate the first album cover, of course, but it was too simple, so I took a look at some pictures of the Ramones for inspiration. These pictures gave me the idea of using the wooded and the metallic fence to complete the backstreet. And the small album covers were also hard to make, because they were like six other projects! Also, the torsos took me some time.

RF: Why did the torsos take extra time?

HS: All of them wear leather jackets; however, I didn’t want all the torsos to look the same. That’s why I designed five different torsos.

RF: How did you decide on the Ramones’ different facial expressions?

HS: The software Lego Digital Designer offers lots of faces with different facial expressions. I chose the ones which looked similar to them. For example, I chose two different pairs of glasses for Joey and Tommy, or a more serious expression for Johnny. Afterwards, I used Photoshop to add details.

RF: I love the different props you gave them, especially the boombox and the food.

HS: Accessories are very important in Lego sets. They increase the playability of the set and add detail to the scene. The boombox is a very iconic element for those years. Lego doesn’t have a meatball piece for Marky, so I gave him a hot dog. The baseball bat is a reference to the song “Beat on the Brat.” 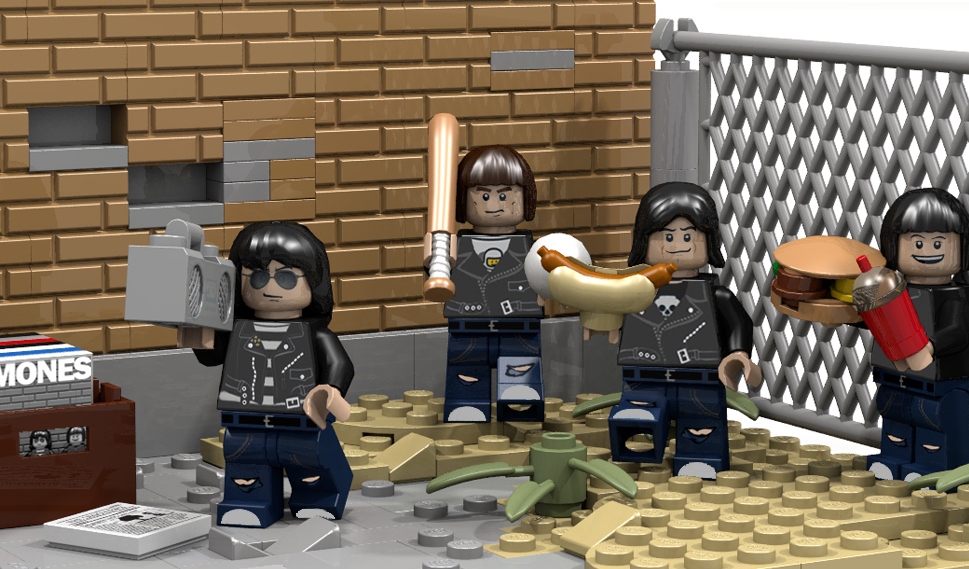 RF: What happened once you posted your project?

HS: The day I shared my Lego project on Instagram, I tagged Marky Ramone and the Ramones’ official page because I wanted to receive their feedback and suddenly, Linda Ramone liked my photo! It was really unexpected and amazing!

RF: Who’s your favorite Ramone and why?

HS: The Ramones were a combination of some very different personalities. The relationship between all of them was very interesting. It’s a very difficult question, but I think Joey is my favorite. I think his personality suggests tenderness and I love his voice.

RF: Do you have other Lego projects?

HS: One project is about another rock band, Queen. It is a recreation of the music video “I Want to Break Free,” with the living room, the kitchen, and Freddie Mercury with the vacuum cleaner.

RF: There’s a ton of details in that video—why did you decide to duplicate that one and not a scene from, say, “The Show Must Go On” or “Bohemian Rhapsody?”

HS: The “I Want to Break Free” video is more fun than “Bohemian Rhapsody,” and the story behind “The Show Must Go On” is too sad to make a toy about it. Recreating the scenes of “I Want to Break Free” was a challenge, of course, but I actually chose this video due to the amount of detail it contains: the kitchen, the stairs, and all the furniture of the living room. Also, their clothes are very iconic for the band.

Head on over to the Lego Ideas site to help bring Ramones Legos to life, and to read more about the project (don’t worry, there are pictures). You have to create an account to vote, but it’s really not that taxing when you consider the end result could be holding a little baby Ramone in your sweaty hands. Don’t screw this up for us.