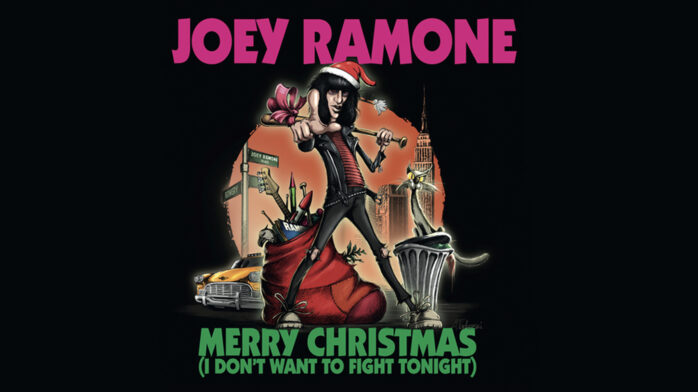 Hey ho, Ramones fans! For just $20, you too can own a piece of the Christmas Industrial Complex (CIC) in the form of a Joey Ramone vinyl record-shaped ornament, featuring the song “Merry Christmas (I Don’t Want to Fight Tonight).” This holiday playlist staple, from the Ramones’ Brain Drain album, appears incognito, however. Side A is the version from Joey’s posthumous solo album, …Ya Know?, and side B is the original bedroom demo of the song… Which also happens to be the first version that the other Ramones ever heard. Also, sales from the single benefit the Red Cross, so that can make up for the fact that deliveries won’t be arrive after the big day.

The project was spearheaded by Joey Ramone’s brother, Mickey Leigh. Riot Fest caught up with the musician and author (I Slept with Joey Ramone: A Punk Rock Memior) to gimme gimme some insight on the project, and to share any memories he may have of how two Jewish brothers in Queens would to spend their Christmases long ago.

Riot Fest: Was it your idea to come up with the Christmas vinyl/ornament?

Mickey Leigh: Actually, it wasn’t… I asked someone else to come up with the idea in 2012. The nice people at BMG released the second Joey Ramone solo album, …Ya Know?, in May of that year; then a few months later they made a really cool little Christmas box set thing. It included an extremely moving documental about Joey, made by filmmaker George Seminara. In the box was a 5-inch green vinyl record in a sleeve with a little hole in the corner, as well as a little double-sided hook (sold separately) for tree hanging. That was five years ago — and only a few were made — so when I saw what the scoundrels were charging people for them at the black market, I realized it was a necessity. I mean, I couldn’t stand by and see one more person trade their kidney for a copy. 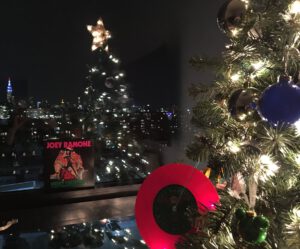 It was my idea to do it again, and to donate the proceeds to the American Red Cross this time around. It was also my idea, while we’re on my subject, to have a B-side on this one. The true stroke of genius on my part this time around was to not just to include the stripped-down version on the flip, but to have it be the original four-track cassette demo of the song, recorded by my brother and I in his apartment the night he wrote it.

Were you there when the A-side was recorded? Is there photographic evidence?

As he often did in those days [late 70’s-80’s], my brother called, told me he had an idea for a song, and asked me if I could come over to help him put it on tape, so he could play it for his band. So, I packed up the little Fostex four-track cassette recorder and Roland drum machine I’d just bought (both were the cheapest models made), grabbed my guitar and bass, as well as a microphone given me by the one and only Lester Bangs, and headed over to his studio apartment on E 9th St [in Manhattan]. Of course, the paparazzi was already waiting outside his building when I arrived, but they were kept behind the barricades, as it was a closed session. So, there is no photographic evidence, only the artists’ renditions of the proceedings.

Have you teamed up with Red Cross on other projects before? Why them?

Well, I don’t know if they know that we’ve teamed up yet. But I hope that when they do find out about it, that they don’t throw me off the team. I was convicted of a grade-D felony for Possession of Marijuana with Intent to Distribute Small Amounts in 1993, so I wouldn’t wanna dishonor them… I mean, the team.

I did do a similar thing once before, when my friend and artist [and creator of the inimitable Ramones logo], Arturo Vega, passed away. I made T-shirts in his honor and donated the dough from their sales to the American Red Cross. I chose them because it’s an organization I’ve been aware of since the time I became capable of becoming aware. I figured if they’d been around that long without a scandal bringing them down, they must — at least for the most part — be legit. I’ve also observed, with my own eyes, that they’re always among the initial — if not the first — to be on the scene when catastrophe strikes. And having lived in New York City for 63 years, I’ve seen a few strikes.

This is such a cool project, and there are only a few 7-inch/ornaments left. Will you be printing more, or is it over when it’s over?

We’ll print more, but only if they print more Christmas when it’s over. I’m just hoping this batch of 500 sells out. Maybe I’ll do it again next year, and the next, and the one after that, and then stop and take some time to think of a different way to run myself ragged, while simultaneously fielding complaints about the outrageous shipping charges and retarded deliveries that are totally out of my control. It’s all for a good cause, though. Speaking of which, I should thank the people who helped me get this done.

Is there a link on the Ramones page where people can donate to the Red Cross all year?

No. But, I think there’s a link on the Red Cross page where people can donate to the Ramones. Anyway, this isn’t a Ramones or Ramones Productions Inc. project, per se. I’m only a 50 percent owner and co-president of Ramones Productions. Anything Ramones requires the two sides to mutually agree on everything, and if I was to try to do something like this with the Ramones proper, it would never happen.

This is a Joey Ramone endeavor, so I can do it smoothly, without getting into any stressful, frustrating situations, and it can be done totally in the spirit of charity and good faith. I already have a non-profit foundation in my brother’s name: The Joey Ramone Foundation for Lymphoma Research. There is information on Joey’s Facebook page and website [and at the end of this interview] telling people where they can send donations for that cause.

Joey seemed to have a real sentimental side (and I know you secretly do too), did you and Joey love Christmas as kids?

Yeah, we did. Even though we were born Jews, our parents liked to celebrate Christmas, as well as Chanukah. They thought of Christmas as more of an American holiday. We had both a menorah and a Christmas tree in our house. Not that we were anti-semitic or anything, but Christmas was just more fun, and it was in English.

Did you have clandestine Christmas traditions as brothers?

In the ’80s we had some clandestine Christmas traditions; but they were illegal and kept us up all night.

Stop scouring eBay for that ugly sweater that you think will be ironic and funny and buy something useful (and do a little good, too). Own a limited edition (only 500 pressed) 7-inch/ornament on Ramones Red-colored vinyl. It can be purchased right here; but hurry, there’s only a few left!

100% of the proceeds from the sale of this single will be donated to the American Red Cross.

Donations to the Joey Ramone Foundation for Lymphoma Research can be sent here:

We recently attempted to get out the vote on the campaign to turn Ramones into Legos (to turn Legos into Ramones?), and the campaign lives on. We urge you to make your voices heard, Riot Fest community. Your voice can and should be heard here.

Rhino’s sprawling 40th anniversary 1LP/3CD deluxe reissue of Rocket to Russia can and should be purchased here.

And if you’ve made it this far, your reward is the knowledge that Riot Fest has procured a copy of the Joey Ramone Christmas 7-inch, and we’ll be tossing it into THE HO HO HAUL #RiotFestmas grand prize, which you can sign up to win right here.