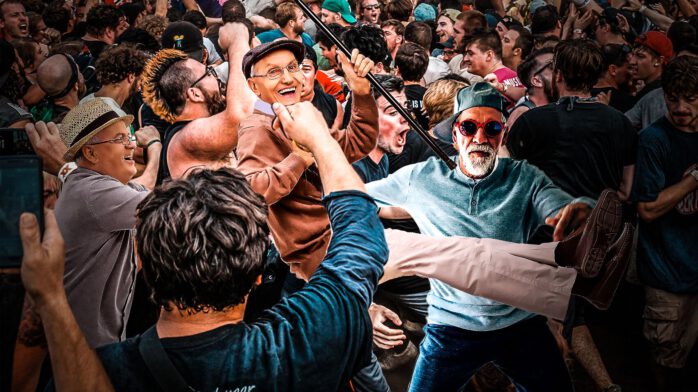 I’m not sure what kind of concerts these scientists have been going to, but a study by O2 and Goldsmith’s University lecturer Patrick Fagan has found that going to see live music could actually increase your life expectancy by nine years.

O2, a live music and entertainment venue in London, commissioned the study, which surprisingly showed that going to see live music at places like O2 is great for your health.

That’s right, a live music venue, paid for a study that found a going to see live music is good for your health.

In the press release, the live music venue that paid for the study that says live music will increase your life expectancy. “We all know just how good it is seeing your favorite band or artist live, but now we have the proof.,” O2’s CMO Nina Bibby objectively remarked. “Life doesn’t come with catch up, and through Priority Tickets, O2 customers have access to over 5,000 live shows in more than 350 venues across the UK every year.” Thankfully, the press release also features a link to buy tickets to see a bunny run across their website, leading you to purchase tickets for live music at O2’s venues across the United Kingdom.

According to the study, going to see live music increases your “well-being levels.” FYI, well-being levels aren’t a real medical thing, but according to this completely unbiased study, just twenty minutes of gig time results in “a significant 21 percent increase in feelings of well-being. Added to this, additional scholarly research directly links high levels of well-being with a lifespan increase of nine years, pointing to a direct link between gig-going and longevity.”

Let’s not forget about the “happiness spectrum.” The study — again, paid for by a live music venue — found that going to see live music may even be healthier than yoga and dog walking! That’s right, going to a concert where you drink, stay out late, and stand in one spot for several hours at a time is better for your health than actual exercise. In reference to live music’s aforementioned affect on well-being levels, O2’s self-serving press release adds that “with key markers across the happiness spectrum showing increases — including feelings of self-worth (+25 percent) and closeness to others (+25 percent) — mental stimulation climbed by an impressive 75 percent.”

Patrick Fagan, expert in behavioural science and associate lecturer at Goldsmith’s University, encouraged regular concert attendance by positing that their research “showcases the profound impact gigs have on feelings of health, happiness and well-being — with fortnightly or regular attendance being the key.” Along with O2’s supposed research, this quack recommends “a prescription of a gig [per] fortnight, which could pave the way for almost a decade more years of life.” We’re guessing Fagan also has a wide variety of snake oil for sale in his online store.

We’re going to see how much Patrick Fagan would charge us for a study saying that people who go to Riot Fest are happier, more successful, and more attractive than attendees of all other festivals in Chicago; and stay tuned for our crowdfunding page, which will be up and running shortly thereafter.