In the early 1960s, teenage sisters Veronica and Estelle Bennett and their cousin, Nedra Talley had formed a singing group called the Ronettes. One night in 1961, the girls teased their hair and applied a glut of eyeliner in order to sneak into the Peppermint Lounge, a sort-of unofficial gay club in Midtown Manhattan, to try and perform.

With nothing to lose after recording a slew of singles that failed to chart, the girls duped the club’s manager into thinking they were the house band’s backup dancers. The girls ended up doing the twist behind Joey Dee and the Starliters all night, and Ronnie took the lead vocal on Ray Charles’ rollicking “What’d I Say.” From then on, they became the club’s permanent act.

Fast-forward to 1963, and the Ronettes are signed by Phil Spector after a disappointing run with Colpix Records. With Spector, the girls release their first big hit and what I considered to be the first real punk song, “Be My Baby.”

While other girl groups like the Chantels and the Shirelles wore demure sweetheart-necklined dresses and sang with carefully-enunciated voices—essentially, the record companies were making these black women more palatable for their segregated white American customers—the Ronettes didn’t partake in that sort of white-washing. 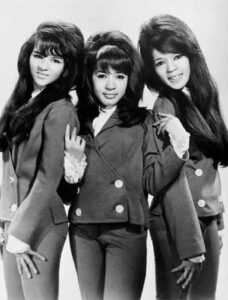 Veronica (now known as Ronnie) basically warbled with her wild voice, making no effort to hide her thick New York accent. She, Estelle, and Nedra were the bad girls from Spanish Harlem; they wore the tightest dresses they could find and ratted their hair into the tallest bouffants that gravity would allow. They looked like the kind of girls you might find smoking cigarettes in the bathroom, showing off their cha cha heels. They wore eyeliner on their lower lids!

When the trio sings “Be my / Be my baby,” it’s less of a plea than a demand. The song is brazenly flirty, transgressing the genteel propriety expected of women—especially women of color. The song reached number two on the Billboard Hot 100, and was called the “record of the century” by Dick Clark on American Bandstand.

The Ronettes were especially beloved by another group of high school friends just a borough away in Forest Hills, Queens. The Ramones took a cue from the Ronettes early on by choosing to pose as brothers. With their black leather jackets, tight jeans, and dark, shaggy hair, Tommy, Dee Dee, Johnny, and Joey stood together like a well-dressed gang—the bad boys of Queens—just as the Ronettes had done about a decade before.

Though they became the catalyst for New York’s punk movement, the Ramones’ signature fast-and-simple song structure owes a lot to their pop predecessors. Dee Dee’s cover of “Be My Baby” simultaneously sounds exactly like every other Ramones song and the Ronettes’ own version, albeit with a guitar riff in place of the original’s castanets and backup vocals from a teenage Cher.

When the Ramones eventually covered another Ronettes track, “Baby, I Love You,” Joey’s uneven but pleasant voice seemingly mimicked Ronnie’s signature warble. The Ramones were also influenced in part by the trio to collaborate with Phil Spector on the 1980 album End of the Century, an endeavor that didn’t work out too well for anybody involved.

The Ronettes’ spunky rock ‘n’ roll kicked down the door for the simplistic chord progressions and rule-breaking of New York punk. Since everything is cyclical, Ronnie ended up finding a collaborator and friend in Joey Ramone; in 1999, she released the She Talks to Rainbows, an EP that was produced by Joey and features a duet between the two on a cover of Johnny Thunders’ “You Can’t Put Your Arms Around a Memory.” In another incredible display of punk cred, the EP was released via Kill Rock Stars.

The pair collaborated one last time before Joey’s untimely 2001 passing, creating Spector’s The Last of the Rock Stars LP (to be released five years later).

Brevity is the soul of punk, and without the short and snappy “Be My Baby,” we might have eventually had to endure meandering drum solos from Marky Ramone, and absolutely no one wants that. As most of her punk peers have passed on (as well as her sister Estelle), Ronnie Spector may well actually be the last of the rock stars.