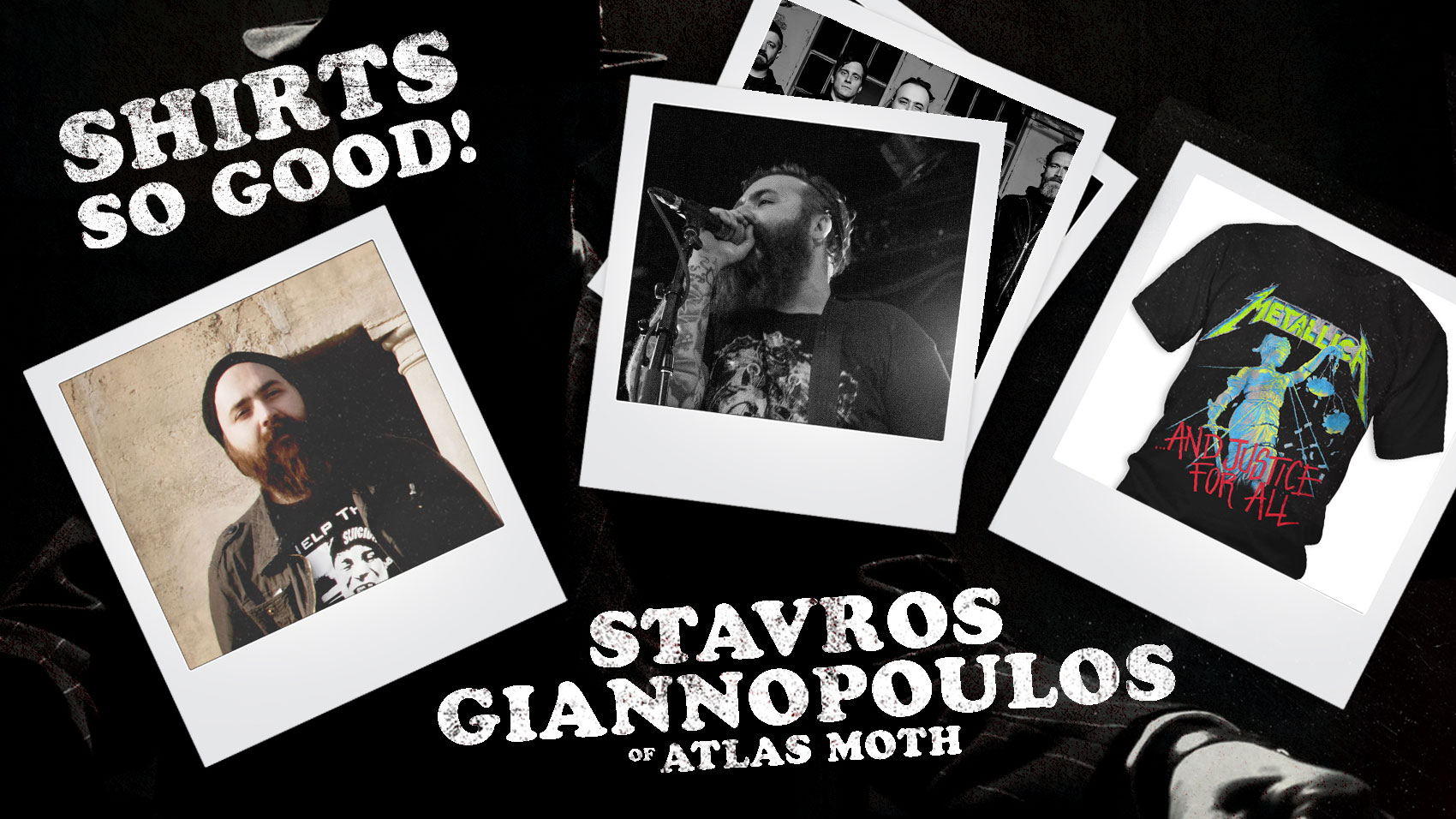 You have a favorite band T-shirt. You know you do. Maybe it’s cheesecloth now, so tattered with holes that it would be borderline obscene to wear it in public. Maybe you’re one of those people who doesn’t gain or lose weight, and it still fits just like it did in high school. Maybe you see nothing wrong with rocking it five days in a row, from work functions to smoking bars to wedding receptions.

With Shirts So Good, we explore the lifelong affection that the coolest musicians have for their top-drawer tees.

Giannopoulos is lucky enough to be just the right age to have been able to witness Metallica at the end of the band’s unassailable first-four-albums stretch—which is basically the sonic equivalent of having seen the original Star Wars trilogy in theaters (for those of us who are old enough to have done so).

Sadly, that’s the only fortuitous part of the ensuing story; a Shakespearean tragedy in which a family divided determines the fate of an innocent little boy’s …And Justice for All short-sleeve.

RIOT FEST: The T-shirt in question is pretty damn iconic: the cover of Metallica’s …And Justice for All, purchased by your older sister at a show, circa 1988-89.

Presumably, you were too young (or uncool) to accompany her. How old were you? Did you beg and plead with her and/or your parents to go?

STAVROS GIANNOPOULOS: I actually did go! It was my first concert. I was 5, my sister was 16. They had an extra ticket; I had already gone to hockey and baseball games and WWF shows with my brother, and my parents were pretty open about wanting me to experience different things at a young age. I wasn’t bankrolled at five to get a shirt, though, which I so desperately wanted.

Amazingly, your mother wanted to throw the shirt away. Was it a religious thing, or did she just think it was ugly?

Definitely wasn’t religious by any means. Honestly, thinking back, I can’t give you a reason other than she disliked it. Oddly enough, that was an acceptable enough reason for her.

How did you keep your mom at bay from pitching this classic? Did your metalhead sister have your back?

So, both my sister and brother were in high school at the time, and at odds with each other—basically, brother was a square and didn’t (still doesn’t) care about music at all, and sister was a headbanger—and I was told to not be like her.

Little did they know, I was a master at playing both sides of the fence, and got the best of both worlds. I got pro wrestling and the Cubs from my brother and music from my sister, which to this day are the only things other than comics that I care about. My sister had my back on saving the shirt, but it was up to me as well.

I would hide it in a weird dresser drawer, not wash it for weeks, put it on when I got to school—all the ways to get it past my mom.

What eventually became of the shirt?

One day, I came home from high school to my mom cleaning a counter in the kitchen with a strip of it. She was quite proud of her accomplishment.

When you attended your next Metallica show, did you buy a shirt?

In 1996, I saw them again at Lollapalooza, and I did indeed buy a Load-era shirt. Fight me about it.

What is the best Atlas Moth shirt, and why is it the one in vintage Deftones font with the screaming cat?

I think maybe the best is the Metal Up Your Ass shirt. But you’re right—it totally is the screaming cat Deftones shirt, because I don’t get it to this day.

Have you ever loved a band shirt like that …And Justice for All tee? What’s at the top of your rotation right now?

I definitely loved this White Zombie shirt with a monster on it. That’s probably like 90 percent of their shirts, but it was black and white and just awesome. I got that at a White Zombie/Toadies/Supersuckers show in 1995. The 90s were fuckin’ weird.

I’ve actually taken a sabbatical from wearing band shirts. I pretty much wore them exclusively for 15 years, and am pretty over being a walking advertisement for bands. I also hate it when someone who has an opinion about the band’s shirt I’m wearing tries to argue music with me—it’s up to your personal tastes and has become a point of annoyance to me.

Lately, I’ve been enjoying wrestling T-shirts again, because you can finally get cool ones. At the current moment, it’s a Bullet Club shirt, because it’s too sweet (if you don’t get it, you’re not supposed to).