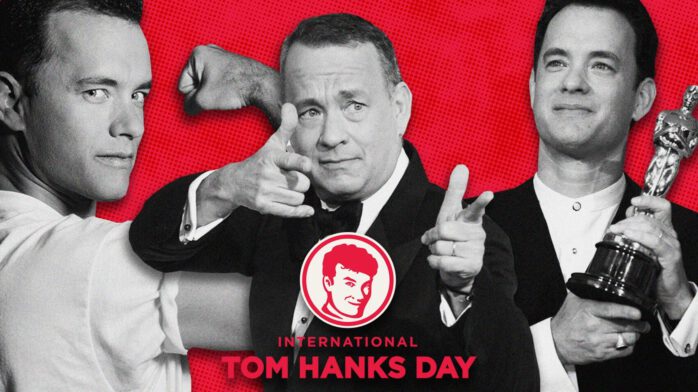 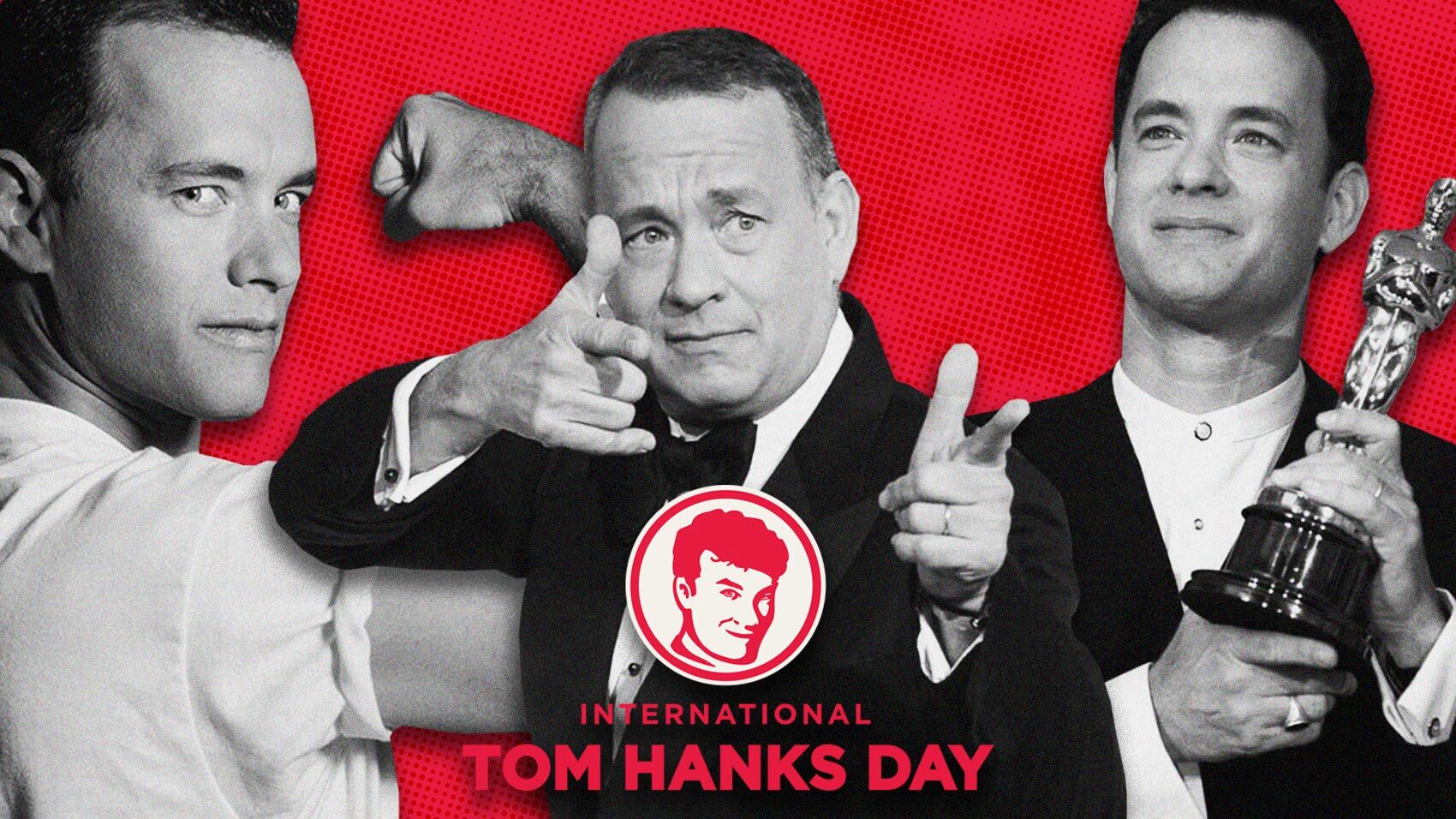 After a few years of backyard keggers, though, Tom Hanks Day did grow into something that needed a bigger home, and has even expanded into other cities (they’ve had to change the holiday to International Tom Hanks Day in recent years, to accommodate revelers in other corners of the world).

Since 2007, after first catching the actor’s ear, proceeds from each year’s celebration have gone to a charity of Tom Hanks’ choice, Lifeline Energy. We got International Tom Hanks Day cofounder Kevin Turk on the e-horn to explain the whys and wherefores of this glorious annual event.

I’ll start with the obvious question: what is it about Tom Hanks?

Honestly, a little bit of everything, but for the sake of full transparency, it was one part coincidence and one part mass appeal. You see, Tom Hanks Day started back in 2004, when six students at Western Michigan University in Kalamazoo stumbled across a Tom Hanks movie marathon on April Fool’s Day, and the rest is pretty much history. We started prank calling friends, declaring it to be Tom Hanks Day (after an adequate sampling of Dr. Pepper and rum… hey, that’s a Forrest Gump reference!), and just tried to carry that vibe throughout the rest of the evening. That following year, one of our roommates casually asked if we were doing anything for THD, and our course was set.

Four years of backyard keggers later, we were ready for primetime and decided to move our event to actual establishments in the Chicago area, where some of our founders had moved after college. From there, we eventually built out our website to give us the ability to help host satellite parties all across the globe (hence the inclusion of ‘International’ in our name).

When you decided to start a holiday, did you consider any other well-loved celebrities? Bill Murray seems a little obvious, but what about George Clooney? John Goodman?

Bill Murray Day comes up all the time, actually. Like, abnormally often. I guess, if there was one person besides Tom Hanks who deserved his own day, it would be Bill Murray. Him, or Daniel Day Lewis… But only because Daniel Day Lewis Day is a ton of fun to say! At this point, I think we’re set in our ways with THD, but we would fully support another legend getting their own day… even the Cloonster, I guess.

Tell us about the charity you’re supporting with this year’s Tom Hanks Day.

Since 2007, the first year Tom Hanks found out about us and became actively involved, 100% of the proceeds from our events have gone to an incredible organization called Lifeline Energy, for which Tom Hanks is a US Ambassador. Lifeline Energy designs, manufactures, and distributes solar and wind-up radios to remote areas of the world. These could be areas where batteries are simply too expensive, kerosene is too dangerous, or schools are too far away from the children who want to attend them, but the common denominator is always a need for more accessible information. The best part about Lifeline is their ability to educate on a wide variety of topics. By partnering with different organizations, they are able to bring information to areas of need. For example, they are present in areas that are experiencing high infant mortality rates, and there they are able to provide information about prenatal care and why it’s important for the mother to eat properly. Areas that are reliant on farming can hold listening groups about the importance of fertilizer and crop rotation. We feel that these examples alone showcase why these radios are so powerful and necessary.

Kellen (Manley, THD co-founder) and I were actually able to spend two weeks in Zambia with Lifeline’s CEO back in 2016, and we learned so much about the radios themselves and the urgent need for cost-effective educational systems. We also learned how wide of a reach one of these radios can have – up to 60 people can gather around a Lifeplayer at any given time, and many of the radios are shared between villages, reaching hundreds of listeners every week.

Yes, constantly. If you’re asking me, though: Forrest Gump is his best drama, and BIG is his best comedy. I don’t know how I’m always debated on this, it’s the closest thing to fact that exists in Hollywood. There is no such thing as the ‘worst’ Tom Hanks movie, just his mediocre ones, which we will now refuse to call out because it’s probably bad for the brand, right? Cough cough… Larry Crowne… cough.

Does Tom Hanks text you or anything on Tom Hanks Day?

Text, no. Tweet? Oh, yeah! He has been great about tweeting to his followers about us over the last few years, and he’s also stepped up his game and started sending us little video messages to play at our events.

Hanks has donated some of his personal ephemera to your cause over the years. What’s the weirdest thing he’s sent you?

Bologna, honestly. He’s a huge fan, I guess, and one year early on, he sent us a ton of bologna, along with his favorite recipe for preparing it. We ate like kings that day, and that’s about all I remember. Other oddities have included his Simpsons action figure, typewriters from his personal collection, playing cards from the set of Saving Mr. Banks, Toy Story tennis shoes, cases upon cases of original recipe Dr. Pepper bottles (click here if you’ve this Forrest Gump reference for the second time).

That’s all I have to say about that.

Do you ever dress up as a Tom Hanks character for Halloween? Last year, my best friend (who still lives in Kalamazoo) went as David S. Pumpkins.

We do! I’m constantly in my Forrest Gump running get-up, now that you mention it! And that’s too funny, Kellen also still lives in Kalamazoo, and I think he mentioned running into a David S. Pumpkins or two last Halloween. I bet one of them was your best friend. You should ask him if he ran into a guy dressed as Larry Crowne that evening. Larry Crowne is the best!

You and your friends started Tom Hanks Day as students at Western Michigan University. One of the worst jobs I’ve ever had (and I’ve had a lot of shitty jobs) was as a line cook at the Bernhard Center (WMU’s student center). Did they still have Little Caesar’s Pizza in the cafeteria when you were attending?

They did! Although I’m pretty sure it’s gone now. Man, that just took me back. Kellen also worked in one of the cafeterias when we were in school, so I’m sure he’d have a lot to say about all that as well. Also, just on a side note, this is probably the best wrap-up question I’ve ever had the pleasure of answering in an interview. Tom Hanks Day, Kalamazoo, WMU, shitty jobs, and Caesar’s…

More info can be found at the epicenter for all things Tom Hanks Day, TomHanksDay.com. Scroll down for a box of pictures from previous Tom Hanks Day events, where you never know what you’re going to get.

That’s all we have to say about that.