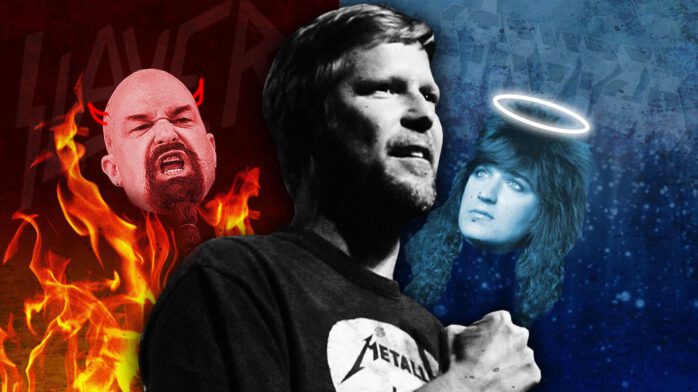 Geeking Out with Albüquerque’s Metalhead Mayor

Tim Keller claims to listen to metal four hours a day. This is one politician who's not lying.
By Andrew Bonazelli / May 3, 2018May 3, 2018 / The Riot Fest Interview 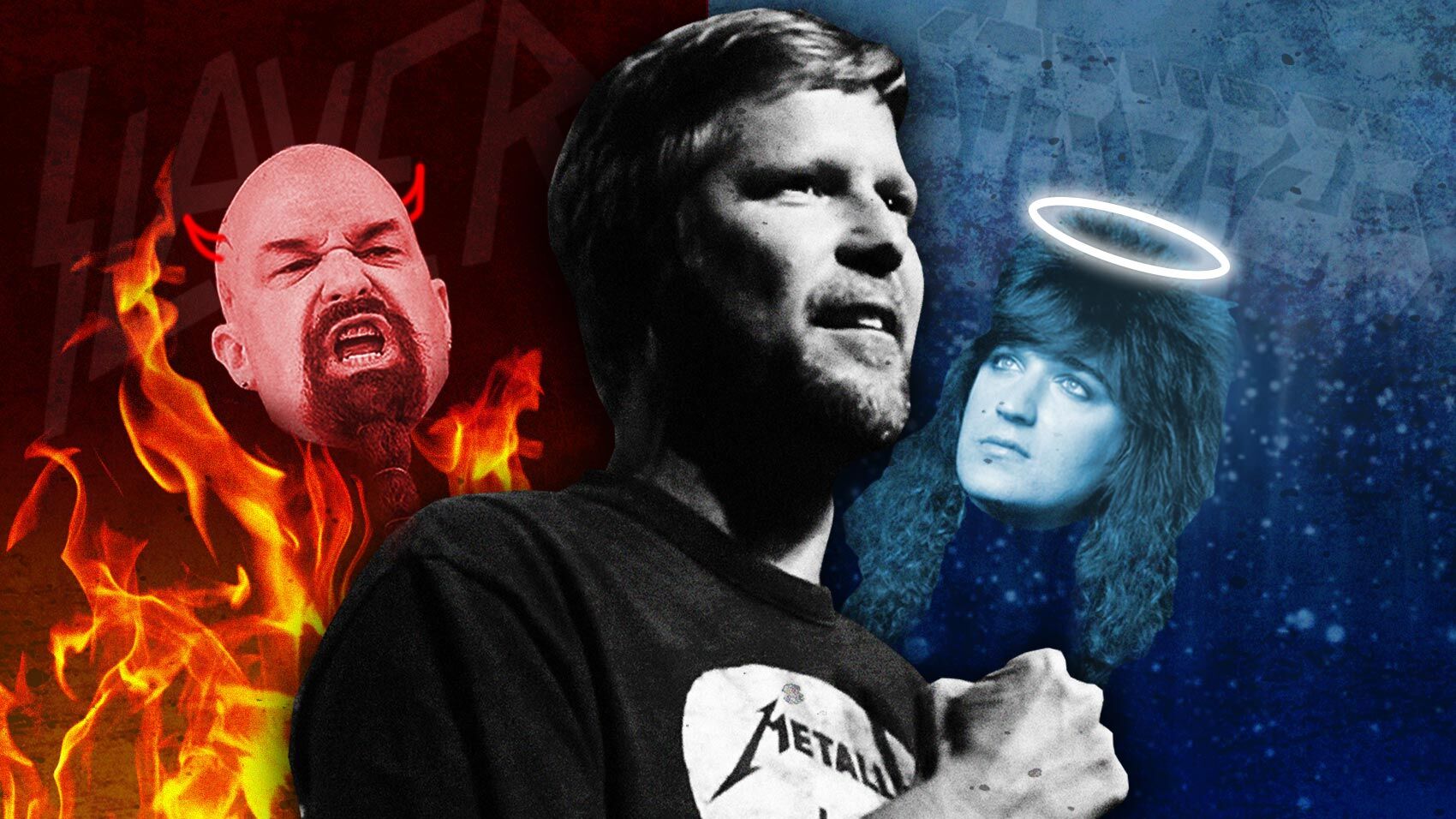 In one regard, it doesn’t matter who holds the most powerful elected office in the country—we’ll always need all the good politicians we can get on the federal, state, and local level. Short of that, we’ll settle for someone who shares our stupid taste in music!

Kidding! Especially kidding when it comes to newly elected Albuquerque, New Mexico mayor Tim Keller. The 40-year-old Democrat came to national prominence following a New York Times profile (complete with Spotify playlist, embedded below for your enjoyment while reading) last month that focused on his lifelong obsession with all things metal.

Trust us, this goes way beyond John Kasich getting down with Linkin Park—Keller is a Sepultura megafan who keeps copies of prominent extreme music coffee table tomes in his office, and introduces the likes of Anthrax and Trivium when they play the Duke City.

Obviously, our curiosity was stoked, and we needed to know much more. So, despite having slightly more important things to do—expanding the city’s police department, working to solve thorny public transit issues, working to wipe out an extensive rape kit backlog, blue meth—Keller graciously took the time to assure us that true metalheads don’t go false… even when shepherding a metropolis of over 550,000.

RIOT FEST: What was the band or show that galvanized you into a metal lifer?

TIM KELLER: For me, it was more of a metal evolution than a singular event. Like a lot of people in my generation, there were gateway mainstream bands that created the path toward metal.

The journey goes something like this: First, in early grade school, mainstream hard rock bands like Bon Jovi, Van Halen, AC/DC, Europe, and Aerosmith get into your head—in my case, from the speakers of older brothers’ stereos and my own listening to the radio picking weeds in the backyard.

From there, you find the (at the time) heavier stuff, like Judas Priest, Iron Maiden, and Ozzy. From there, Metallica—who were at their commercial peak—were the gateway into thrash. This wasn’t what was on mainstream radio, so I quickly found myself blowing all my allowance money on cassette tapes [and] tape-trading mixes, and reading magazines for new bands.

At the time, you couldn’t just listen to a band on the internet—it was all word of mouth or trying out new bands because their name sounds metal, or their album cover looks cool. I discovered Machine Head’s first album that way.

At this point, I’m hitting shows like Megadeth, Ozzy, Sepultura, and Prong. Later, when I was in high school, Pantera took up the mantle of metal kings and were my gateway into death metal and tons of subgenres. I also liked some of the then-newer heavy bands, like Alice in Chains and Soundgarden (and other related bands like Gruntruck and My Sister’s Machine). At the time, they weren’t called grunge, and we all just considered they were taking Black Sabbath in new directions.

There are some bands like Testament and Sepultura I’ve been into at all stages of their careers. Others, like Metallica and Corrosion of Conformity, I’ve gone a bit more hot and cold on over the years.

Seeing System open for Fear Factory at 9:30 Club in D.C. was a life-changing event.

From Sepultura and Testament to the Big 4, it seems like your preferences for heavy music mostly lie in thrash. What’s your platform on subgenres like doom, death metal, grindcore, etc.?

I do enjoy certain bands across many subgenres, but the scene has exploded into so many, it’s hard to stay on top of it all. Back in high school, I got into Kyuss and Clutch big time—that led to a whole vein of doom, sludge, stoner, [and] southern-type metal that later turned me on to bands I am still really into, like Spiritual Beggars, High on Fire, and Grand Magus, who actually got much heavier and “true metal” as they matured.

They also helped me connect with Swedish death, such as In Flames, the Haunted, Arch Enemy, and Amon Amarth (I’m wearing their T-shirt as I write this). I also have a brother who’s totally into old-school power metal, so he’s turned me on to some great bands in that genre; I listen to lot of Majesty, Primal Fear, Sabaton, and Grave Digger as well.

Finally, certain bands like System of Down, Rage Against the Machine, and Tool also just grabbed me from day one, because they are just so innovative and literally brilliant. Seeing System open for Fear Factory just after their first album came out at 9:30 Club in D.C. was a life-changing event.

Have you always been comfortable discussing your affection for extreme music over the course of your political career? Despite Albuquerque’s history with prominent heavy musicians, it seems like there’s still enough of a stigma about metal to give your opponents ammunition.

I’ve actually always owned my love of metal, even when I got into politics 10 years ago as a state senator. The funny thing is, no one cared or noticed until I became mayor. I get a lot of people who are like, “Not sure about music taste, but I like you.”

I have had opponents try and use it here and there by saying I’m too “fringe” or “alternative” because of metal, but it seemed to make them come off as really stodgy and desperate to be making fun of someone’s music taste instead of debating the issues.

In one mayoral debate, I do remember responding to some metal-bashing with something like, “Oh, we’re debating music taste now? What’s next—we make fun of how the other dresses, or our hairstyles?” That put an end to the discussion.

You’re a husband and father of two with an enormous deal of responsibility. How do you stay up-to-date on new bands in your limited downtime? Do you seek out any particular magazines or websites, or do you have friends who keep you abreast of what’s going on?

I was pretty current until I had kids and took public office. Now I can only fit in a couple of shows a year. Until about four years ago, I read Metal Hammer and Revolver almost every month. I used to read Brave Words & Bloody Knuckles extensively as well, when it was in print. Now I’m a few years behind for sure, but as mentioned, I have friends and family who also help keep me up to date.

Also, so many bands I’ve been into are still touring and putting out incredible new music, so that makes it easier. Metal is part of the background of my daily life: I wake up to it (currently my alarm song is “[I’ve Been] Sober” by DevilDriver), I drive to it, I work out to it, I read with it, I work on the computer to it long into the night.

I probably listen to metal at least four hours every day.

From the PMRC to Norwegian church burnings and national socialist black metal, extreme music has not exactly enjoyed a stellar mainstream reputation over its history. What makes you look past all of that and preach metal’s positivity and inclusivity to your constituents?

Metal for me has always been the music of rebellion, challenging the status quo, finding the power inside yourself to overcome adversity. Metal often gets an unfair stereotype because of a few one-off examples; that’s what happens with every type of music that pushes the limits of mainstream media. I don’t get hung up on a specific set of lyrics or individuals behind the music.

Metal is made by people from all walks of life—some might be a little messed up, some might deal with their issues in healthy ways, and some might not. That is about them more than the music. And the PMRC, that was just ridiculous in the first place. The irony is that the records and tapes that had warning stickers on them just became more popular, and it also pushed many in the metal community to push the limits of extreme.

If you were to encounter a metalhead who was too jaded to vote, would your approach to change his or her mind differ than your approach trying to sway anybody else?

A lot of metalheads don’t vote. Part of the ethos around rebelling and fighting the system can lead toward a path of not voting, so I get it. But fundamentally, you can’t complain if you don’t vote. America would be a much better place if more people voted—especially younger people.

So, from a metal perspective, I say, “You wanna stick it to the man? Practice what you preach (cue Testament!)—show up and vote. That’s something that actually might make a difference.”

Since the New York Times profile, you’ve gotten a lot of press in the metal world. What do you want those heretofore unfamiliar readers to know about Albuquerque?

Come check us out. We are one of the most unique cities in the U.S., literally! Our city history goes way back, even before the Pilgrims; our pre-Anglo culture is in many ways still intact, and is reflected in our vibrant arts and music scene. Albuquerque is like its own subculture—a kind of authenticity and grit that combines with our city’s incredible scenic beauty to really draw people in. And both Albuquerque and New Mexico more broadly are great places for metal. We’ve got some great small and large venues, and people totally get into it—we’re not spoiled by as much choice as larger markets, but that makes audiences all the more appreciative and into the music.

You got raves for your Breaking Bad-themed campaign ad for state auditor in 2014. Has there ever been any temptation to use metal in a spot?

Maybe for the next one. Actually, I haven’t really thought about it that much. I’ve never thought of my love for metal as anything campaign-related besides personal conviction and inspiration—I was deep into it long before I became a politician.

At the end of the day, when it comes to my job, I’m an issue-focused guy on mission. I’m grateful our city has given me the chance to lead us out of some really tough times.

So, I’m far beyond driven [well played, your highness!] to deliver for the people of Albuquerque, but you can bet metal will be my personal soundtrack to life on the way!

When you’re introducing a band like Anthrax or Trivium onstage and you’re in the moment, with the entire audience screaming, be honest: Is it a little hard not to swear?

Ha, good question! Yes, in some ways it’s like I’ve got Kerry King from Slayer on one shoulder saying, “Be 100 percent pure #$&*@$^ metal!” and, say, Michael Sweet from Stryper on the other saying, “Dude, you’re a public official—keep it together!”

The truth is, however, that there’s probably more times doing my day job where I’m faced with the situation where I feel like swearing, but have to pull back so as to keep things constructive—that’s just the nature of politics. So, I guess you could say I’m pretty used to it.