One of the most surprising revelations from our interview with longtime friends Marisa Dabice and Thanasi Paul of Mannequin Pussy is that their new album (working title: Patience) contains a song that’s four minutes and 30 seconds. That’s quite a seismic shock, considering their brief yet explosive 2016 punk-rock album, the 18-minute-long Romance, has zero songs that crack the three-minute mark.

Another fascinating bit of info about Marisa she told us: One day she may leave this all behind for a quiet life of public service. Before that happens, though, there’s still plenty of insightful, noise-filled stabs of punk music they plan to give the masses.

Read on to hear Dabice and Paul speak with Riot Fest about their new material—which could be released some time next year—and why their music never plays by the rules. 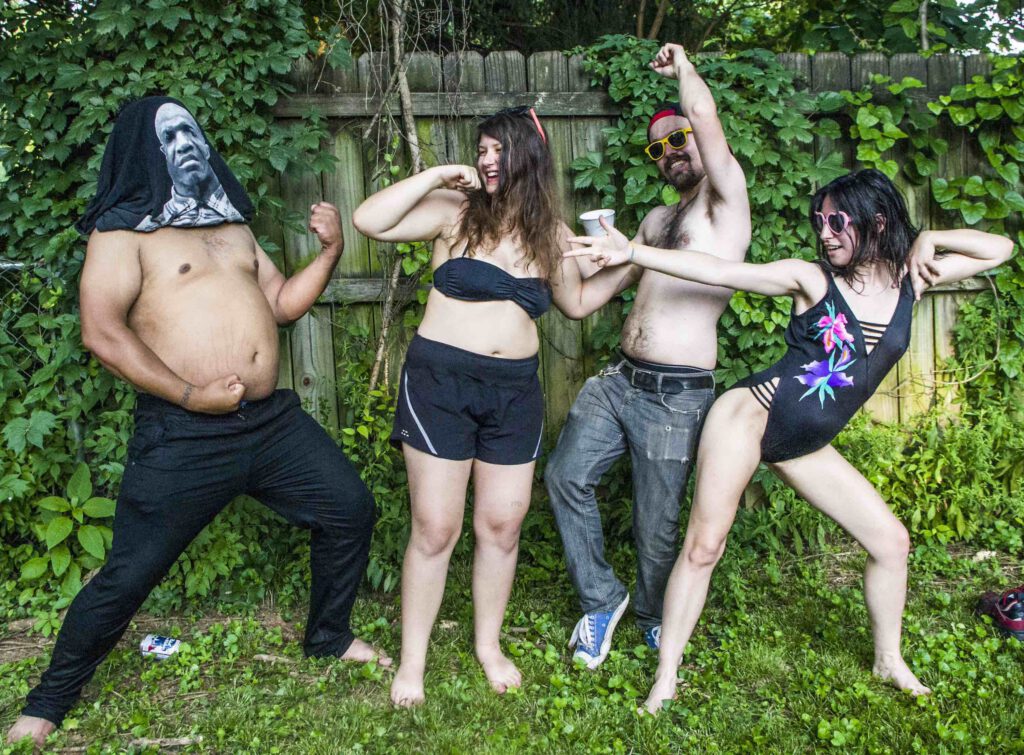 RIOT FEST: Marisa, you used to have a band when you were younger, but then they never played. What was the name of that band?

MARISA DABICE: We were called Simon and the Mofos.

Why didn’t they play?

MD: Honestly, because I was betrayed [laughs]. I had one of those young girl teenage betrayals of the heart.

MD: So the band broke apart before we ever had a chance to make something of ourselves, or to really learn how to play our instruments.

So, a mix of reasons.

MD: [Paul] Thanasi was in a band during that time, and to us it was inspiring. A lot of our friends were in bands together and we wanted to do that too. We just…

THANASI PAUL: Didn’t do it.

MD: We let drama get in the way.

Sometimes you gotta work through the drama. Around what time was that?

Then you didn’t get into a band until you were 23.

MD: Yeah, Mannequin Pussy was really the first band Thanasi and I started together, but before that I got the chance to go on tour with Colleen Green to play bass. So I tried to fake my way into a touring musician gig and got thrown into the fire.

MD: It was amazing. It was what I wanted to happen in my life, and I was focused enough to allow something so crazy to come into it.

Why do you think Romantic has been able to leapfrog across all these genres and still sound like it all fits?

MD: I think it’s easy when all the songs are coming from a similar emotional place. That kind of raw emotion that you feel in each song, I’m sure you could assign them to a different genre, but that feeling is really what links it all together. We’ve never really been interested in being that kind of band that makes the same songs for their entire career.

TP: I don’t think it was necessarily by design that that happened, but I think we’re all different enough people and we all listen to all sorts of different types of music. I think we’re all very grateful that it actually worked, and wasn’t a complete disaster.

A lot of the songs on Romantic lack like the traditional stuff like, a chorus, lyric, bridge, etc. Was that intentional?

MD: [It was] not intentional.

MD: We felt no pressure to go in and put a pop structure into something that already felt natural to us. We don’t really need to play by anyone else’s design of what makes a song; we make the song. There’s some songs (on the new album) that maybe do fall a little bit more into that classic structure of a song, but we’re gonna continue to figure out what that is for ourselves.

What will people hear from you at Riot Fest?

MD: They’re gonna hear a lot of new songs, probably a lot of the new album that’s being finished now.

We toured a lot in the last few years since Romantic came out, and it’s given us a lot of time to reflect on the kind of live performance that we want to create and be able to share with people. We’re definitely trying to push ourselves to continually make things more exciting and aggressive and cathartic, and all the good things that you should feel when you go to see a live concert.

What can you tell us about this new music?

MD: I think it’s the best stuff we’ve ever written. We’re all so focused on it right now and committed to seeing the vision through. We don’t want to make the same album again.

MD: There are still a lot of very aggressive songs. There are some what I’m calling hardcore duets between myself and Bear; Bear is singing a lot more on a bunch of songs. There’s a ton of some new styles. We have a song that’s actually four minutes and 30 seconds. The shortest song on the record is 45 seconds.

Have you been working on this while on the road?

MD: Uh, no. It’s really hard to work on music when you’re traveling, or at least it is for us. Some of these songs were written at the same time that Romantic was being done, so they’d been around, and we’ve been playing them for two years. So it’s exciting for us to finally get to see them through to this final stage. But other ones were written just a couple months ago.

When will the album be completed?

MD: That’s our goal—by the end of August, this album’s gonna be fucking done, please, but we’re having a great time doing it.

Will people hear it at Riot Fest?

TP: They’ll probably hear half of it.

The song “Meat Slave One”—is it a straight attack on people using iPhones? Are you basically telling people, “get the fuck off your iPhone?”

MD: That song is not that deep. We were old enough to see this cultural shift in how people relate to one another, and it’s disheartening in a lot of ways to see the way that people allow this, this block in their hands, to actually block them off from other people, and to block themselves off from feeling good about themselves.

MD: It’s dopamine in your brain. Dopamine doesn’t make you happy. It gives you a rush.

TP: It makes you complacent. It keeps you falling in line.

MD: Oh my god, I just saw that movie Eighth Grade, I don’t know if you’ve heard about it. It was amazing. It was one of the best coming of age movies I’ve ever seen, but it is all about being an eighth-grader now, and it’s so heavy on how social media influences the way that they see themselves and the way that they interact with their classmates. It was simultaneously depressing. I was happy to have grown up… I don’t know how old we were in eighth grade, [but] that shit didn’t exist [for us]. Thank god it didn’t exist because it’s already so rough.

TP: We used pay phones back when I was in eighth grade.

It seems everyone was hoping last year and the year before that political things wouldn’t get this bad, and it continues to get this bad. How do you guys cope with the onslaught of bad news these days?

MD: Luckily for us we have music. We’re in a fortunate position. We’re in a position of privilege where music in a lot of ways allows you to dip out of a regular life. You have this escapist, cathartic release that you can rely on to help get you through times that feel overwhelming. From a personal place, I have interests in one day running for office or being involved in government one day, and I feel guilty sometimes for doing something that I feel kicked me out of communities. We live in Philadelphia, we have a strong community here, but we also leave for months at a time throughout the year and so, we are each other’s community, we are each other’s family, so we look after each other as best we can and try to connect with people as we travel.

When do you think you’ll go into politics?

MD: [In] five or ten years. I might be a city councilwoman or something that’s directly involved in the community that I live in. I think there’s gonna be a lot of attention on Philadelphia as the city grows. Every city is a microcosm of the issues that the macro is dealing with, so if you’re able to address that locally, where are you are, you can set a precedent that other people can follow to make things better for where they live as well.

I think sometimes people in politics forget the daily struggles people have.

MD: They’re motivated by power. They’re not motivated by compassion. And I think that that’s something that’s driven us as a band too. Personally, I’m driven by the compassionate belief that we can all do better and be better to each other and treat ourselves better too. And you can’t let evil crush your spirit, either.

Is there a band coming to Riot Fest that you were thinking of checking out?

MD: I’ve really been wanting to see Bully for a long time, and I know that Bully is gonna be there. We have friends in Speedy Ortiz, who are gonna be there. I like looking at festivals to see which of my friends’ bands are playing and I’m like, “Oh hell yeah, we get to hang out again.” We’re also gonna stay in Chicago after all of Riot Fest, and hang out and party. Yeah, we earned it.