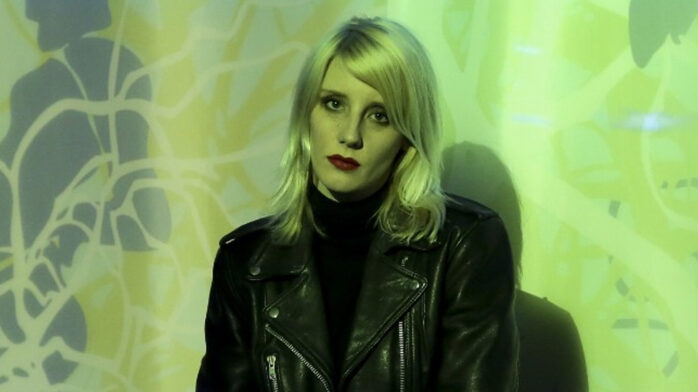 White Lung are cool enough on their own—guitarist Kenneth William spits out shape-shifting art-punk leads, bassist Carolyn Doyle and drummer Anne-Marie Vassiliou gamely keep the train upright through every hairpin turn, and vocalist Mish Barber-Way conducts with sneering, hypnotic panache. Over four increasingly exceptional albums since the turn of the decade, the Vancouver, B.C.-based provocateurs have done their part to keep indie rock from completely transforming into one giant Apple commercial. What elevates White Lung beyond even that rarified air are Barber-Way’s extracurricular exploits.

Over the past few years, her candid, insightful freelance contributions for outlets as diverse as Vice and Hustler have turned many a head, but her most recent day job was what piqued our interest: executive editor for Penthouse. The iconic adult magazine has titillated and outraged the masses since 1965, and is a perfect landing spot for a fearlessly opinionated free thinker like Barber-Way. As much as we wanted to pitch her this interview via the magazine’s preferred form of sensationalized discourse, we took the tactful route and simply hit her up via email. She was kind enough to discuss the mag’s revelatory Stormy Daniels cover story, the crossover—or lack thereof—between White Lung fans and Penthouse readers, and exactly why “PUSSY IS GOD.”

RIOT FEST: Tell us a little about your responsibilities at Penthouse. What have you accomplished in your tenure that you’re most proud of?

Fast forward a few months, and an internal shitstorm hits—they let my editor go, and offered me his job. It was not an easy decision. White Lung was leaving for a three week tour with Rise Against the following week. I finished my first issue of the magazine “The Money Issue” in the back of the tour van, dressing rooms, and that corner chair in the hotel room no one uses. I’m proud of pulling that off. Typing in a moving vehicle is all kinds of annoying.

We also recently launched penthousemagazine.com trying to evoke the spirit of our founder Guccione for the millennial and GenZ crowd. The goal is smart, high/low content that confronts the culture war while also being able to laugh at the world and, more importantly, ourselvees. We have reality star Farrah Abraham reviewing classic books, Mandy Stadtmiller giving sex advice, Miles Raymer talking about socialist issues through music and pop culture, and obits on every cultural figure the Twitteratti cancels. We have profiled everyone from Jennifer Herrema of Royal Trux to country music rebel Wheeler Walker Jr., to porn-star-turned-DJ Carter Cruise and pushed hilarious think pieces on Axl Rose.

How did friends and family react when you told them about the job? Were they cool with it or did you get blowback?

No one in my family is surprised by anything I do anymore. My parents aren’t uptight at all. Baby boomers think it’s cool that I work for Penthouse, and it retains its cache with older millennials, but Gen Zs have no idea about Penthouse, Playboy, or Hustler because they have MyFreeCams, Chaturbate, and ManyVids.

Were you a regular reader of Penthouse, or any other adult magazines growing up?

I got into them in my late teens and early 20s. It was always a fascination. Finding an old Playboy, Hustler, or Penthouse at a thrift store felt like gold. The photo shoots were great—I loved the moody lighting of Penthouse, the bubblegum blondes in Playboy, and the twisted layouts Hustler did, like that ’80s issue with the punk girl spray painting a wall with slogans like “PUNK KILLS” and “GEORGE BUSH HAS AIDS.” Larry Flynt did not give a fuck. I collected Penthouse Forum, which was their pocketbook of erotica. I loved those. Plus, they were hard to find.

What was your last 40+ hour ‘grind-it-out’ day job before this one?

Must have been in 2012 when I was working at a coffee shop called Gene. I waitressed throughout university and did the barista thing, until I was making enough touring and freelance writing that I could quit.

Is there a dearth of women in editorial positions at adult magazines? Is there a trend going either way regarding that?

What’s your elevator pitch to a potential reader who, say, only remembers the letters section and various spreads from their uncle’s copy 20 years ago?

My columnists and artists range from comedian Joe DeRosa, to CEO of Married to the Mob Leah McSweeney, to Zachary Lipez and L.A. skate guru Todd Francis. I’ve got a chick from Long Beach who does perverted cartoons under the alias Chulaface. Our cover stories are done by young, in-the-thick-of-it journalists who just want a place their ideas aren’t going to be policed. I have tried to provide that.

Playboy’s editorial has historically been so renowned that it spawned the old chestnut “I only read it for the articles.” Do you have aims on steering Penthouse toward that level of mainstream respect?

Playboy is really playing to the narrative now: “Entertainment for everyone,” not “entertainment for men.” They’re trying to appeal to millennials. Are they doing a good job? I don’t know. I still have a subscription. I don’t see why they won’t show vagina. It seems so anti-sex to me. I remember when they took out nudity in a hope to “mainstream” themselves. They lost something like, 28 percent of subscriptions, and only saw a seven percent spike in newsstand sales. I just don’t see the point in trying to be mainstream. Maxim exists.

Have you noticed your core demographics shifting away from heterosexual men? Is there a struggle to incorporate progressive copy without potentially alienating your base?

Yeah, and I really try to strike a balance. Our core reader isn’t in New York or L.A. with a liberal arts degree. He’s a 50-year-old man who doesn’t want politics preached at him next to his naked babes. He doesn’t want cartoon after cartoon talking about how much Trump sucks. (I cut the Trump bashing down when I took over. It’s boring and our reader doesn’t want that.) I also try to make sure we have models who have bush and look mature.

What’s the biggest perk to this job that we might never guess?

Creative freedom. I absolutely love producing our photo and video shoots and overseeing the original spreads we create for the magazine.

How do you balance multiple editorial responsibilities with your band-related creative instincts? Walk us through an average day in your life right now.

I wake up, read a bit, take my dog for a hike, then get to work. Write, edit, copy edit, write. If we have a shoot, that’s a full twelve hour day. Then I get home, make dinner for my husband, and hang out. I’m back in the studio with White Lung this whole year, so I’m trying to write.

How much crossover is there between White Lung fans and the average Penthouse reader? Have you lost any particularly uptight fans because of your day job?

I got in trouble from some people for hiring Mitchell Sunderland to write the Stormy Daniels feature [May/June 2018]. I saw some bitching online, but no one will say it to my face! I tried to debate this woke YouTube rapper guy who was all bent out of shape about it, saying the Daniels story was a feminist story and I shouldn’t have hired Sunderland. OH YES, woke dude. PLEASE, I can’t wait for you to preach to me about how I should do my job and how to be a good feminist. I responded, and he deleted his tweet.

Again, I think people assume that every men’s magazine is stocked with Mad Men-esque old-as-dirt pimps who just sit around drinking scotch and talking about how dumb women are. Insane! Penthouse’s editorial staff is 60 percent chick. Playboy’s staff is full of girls. Hustler’s editor-in-chief is a woman, and so is their creative director. It’s not that world anymore. We are just doing our jobs—trying to keep these iconic brands alive and preserve their legacy in a world that wants print to die.

I love Penthouse just as much as Marie Claire and The Walrus. I’m a fan of storytelling and gorgeous women! As I said to another journalist, Penthouse is a place of female worship. PUSSY IS GOD.

Give us an update on where White Lung stands in the process of recording the new LP. Anything in particular compelling you thematically, or are you not there yet?

I am slowly thinking about lyrical themes, but I’m so busy right now that my brain hasn’t even transformed back into music mode. I’ll probably write about pussy. Kidding. My husband and I just bought a house in the mountains and have slowly started setting up guitars, etc. I’ve been playing a lot of country for the last two years.