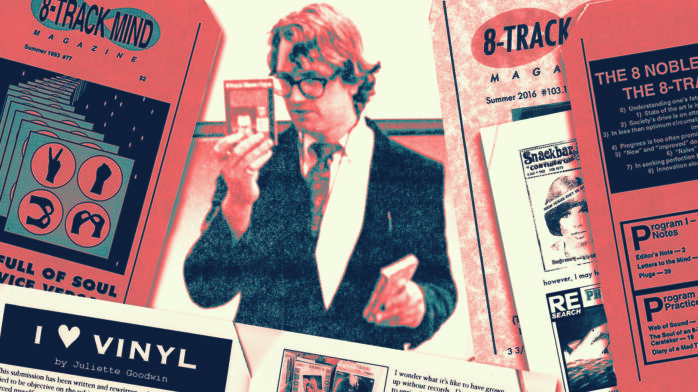 Behind the Zines, Vol. 2: An Interview with Russ Forster

In 1990, Russ Forster began editing the quarterly zine 8-Track Mind as a way to celebrate the oddball (and often performative) subculture of 8-track tape enthusiasts. As the zine spread far and wide, Forster furthered this celebration by directing the 1995 8-track documentary So Wrong They’re Right. After putting 8-Track Mind on hiatus in 2001, he brought it back in 2011. In between his career as a hospice nurse and his shifts as a radio DJ, issues have been coming out slowly but surely ever since. He talked with us over the phone from his home in San Francisco about the past and future of 8-Track Mind.

RIOT FEST: So, how did the zine begin?

RUSS FORSTER: In the late 80s, there was a shift in terms of music formats. A lot of us bonded over not accepting the shift that was being promoted by corporate music conglomerates—it was a shift from vinyl LPs to CDs. Corporations were making all sorts of wild promises: that they were unbreakable, that they would last forever, that they had perfect sound. We knew enough from the few CDs we’d encountered to know that this was not true. These were bogus promises being made to us and being made to the public at large—and most of the public was eating it up.

I was playing in some bands and touring, while also living in Chicago and hanging out with some performance art friends who were also into 8-tracks. We were into them just for fun and because they were a cheap, easy way to build a music collection. And we also liked the ugly duckling aspect of them. So, perhaps it was a bit of contrarianism on our parts to go in the opposite direction and say, “Okay, we’re going to go to this discarded format—which was basically planned obsolescence by the corporate conglomerates—and we’re going to elevate that.”

In touring around the country, I started to realize that there were these pockets of people who were into very similar things without us communicating directly in any way. That was intriguing to me, that there could be these spontaneous bursts of common culture. The idea then popped into my head: what about trying to bring these people together, to give a mouthpiece for whatever was going on? We couldn’t even really define it—we were compelled, but not totally in on what the compulsion was. I came back from all my tours and got together with the group of us in Chicago and said, “Maybe we should put together a magazine and see if we can get all these different groups talking.”

At the time, I thought we’d probably find fifty people around the country who were into this stuff. But it went far beyond that. It was a big surprise to everyone how far it actually went. I thought it would last three or four issues, and we would find all the people we needed to find and we’d move on. But it had a life beyond what I predicted. Or what any of us could have imagined.

It was the kind of zine that people who had never played an 8-track read; people who just kind of wanted a peek into a weird world. Is there anything you can point to—a review, or something that spread it to folks who weren’t part of the 8-track community?

Around that time [the zine review magazine] Factsheet Five was going strong. They always gave us really good reviews, and these reviews came from the perspective that you don’t need to be into 8-tracks at all to get something out of the magazine; it was about more than just 8-track tapes. At the time there were collector’s magazines for LPs and 78s, and it didn’t look like that. It was actually sort of anti-collector, because nobody at the time thought 8-tracks could be collectable in any way. They were just garbage to most people. So I think Factsheet Five caught on pretty early that 8-Track Mind was social commentary, a manifesto of sorts. The zine was almost like a performance piece where it seemed to be about one thing, but it became a lot of different things to a lot of different people. And I loved that idea. I was glad it spread beyond the community.

As the editor, from the early days I was very committed to trying to make it look as “professional” as possible. I taught myself QuarkXPress, which was the way-out design program at the time. I went to Kinko’s because I didn’t have my own computer, and I borrowed and stole time to teach myself to lay out the magazine as professionally as I could manage. Was it really professional? We were probably deluding ourselves a little. But compared to a lot of zines out there at the time, it had a relatively clean look to it. And we were all committed to this aesthetic because, number one, people couldn’t just laugh us off and say we were just a bunch of goofy bozos, and number two, so it would have a chance to get into stores and other places that may have higher standards.

Do you think the film contributed to this at all?

The film came spontaneously out of what was going on with the magazine. 8-Track Mind was getting distributed by Tower Records and it was starting to get write-ups in mainstream media like Rolling Stone. It was going places that I never expected it to go—it seemed to be speaking to a larger audience than I ever expected it to speak to.

I’d made some experimental 16mm films in the early 90s and I had a friend who was a cinematographer and contributor to the magazine, so I thought, let’s do a film zine, of sorts. The way the film’s set up, it’s almost like a visual zine. That’s the way I was looking at it, anyway. I wanted it to be very similar to the magazine. It was always very important to me to keep in mind the collaborative aspect, so most of what ended up in the magazine would just be unsolicited contributions coming to my post office box. I had the idea that the magazine was sort of a clearinghouse—a place for a lot of different voices. Even people who said 8-tracks are stupid, I would print their letters too. To me, all of this was valid.

For the film, I just chose some of the characters who I’d been most intrigued by who were contributors. And I used the film as a way to meet them and work on this other collaborative effort. So I didn’t see it as a way to push the zine forward. I just felt like, “This is the next step, and we’ll see where it goes.”

Why did you initially decide to end the zine in 2001?

That was about at the ten-year point for my involvement in the magazine. And that seemed like a reasonable amount of time for it to let it do its thing. Also, I was getting very distressed that the magazine was becoming a victim of its own success. I liked all the different voices, but there were some voices coming in that I wasn’t really on board with. Those were voices of people who were trying hard to monetize 8-tracks; to treat them like a collectable item and make tons of money. I was getting requests from people to make price lists for 8-tracks.

In a collector’s world, I guess that makes sense. But it’s complicated. There are these hierarchies in all collector worlds, where you have people who are setting the prices for the rest of the world and have a certain power and cachet—and they can set those prices just to make themselves a lot of money. The whole thing seemed rather tawdry to me, and I was getting more and more disappointed with the direction the 8-track scene was going in.

For me, it was about expression and creativity and performance and fun. One of the things that attracted me to 8-tracks in the first place was that they had no value whatsoever, and you could do whatever you wanted with them. But when you start putting value on something, it becomes less fun, there are more restrictions, there become rules. And that’s just not the route I wanted to go. I felt ten years was good. I wasn’t feeling great about the direction things were going in, and I want to get out before I got bitter.

That was a bit of a dare from Mark Maynard [of the Crimewave USA zine]. Atomic Books put out this zine challenge for old zine-makers to make another issue, even if they had been retired for a long time, and then they were going to have this exhibit. And that appealed to me—I liked the idea of doing it on a dare. And I liked the idea of, “Well, it’s been ten years since the last 8-Track Mind, where are we at now? Is it still relevant?”

So I even opened it up further than I did during the 90s era. The theme was “zines vs. blogs,” so there wasn’t even anything about 8-tracks in the theme, per se. But I wanted to explore some of the concepts of the original 8-Track Mind, but bring it more up-to-date. So I ended up asking people who were primarily writers and had no interest in 8-tracks whatsoever to contribute, as well as some of the old 8-track people.

The new issues feel completely in line with what came before, but it’s also become something different.

That’s what I was always hoping with the magazine: that it would always evolve and change. And have an aspect of cognitive dissonance for people. “Why is a magazine about 8-tracks talking about blogs?” A lot of people asked that question.

I’ve done a few other issues since then, but it’s on a ridiculously loose timeline compared to back in the 90s when I was basically doing a quarterly issue. I did pretty well at keeping to that timeline in the 90s, but now it’s just every few years when I feel like I’ve got something to say, or some topic pops into my head, or I have a conversation with some of the old-timers.

For this issue coming up, it was a chance to reconnect with people who were instrumental in the 90s version of the magazine. We’ve gotten on with our lives, we’re doing different things, we occasionally ask how we’re doing, but we haven’t really collaborated in 20 years. So I wanted to see if they were interested in collaborating once again. And the response was really positive. The ostensible theme is about the commodification of nostalgia. But, of course, in keeping with the spirit of 8-Track Mind, most of the pieces have nothing to do with that whatsoever. [laughs]

That’s coming out later this year?

There’s going to be a performance of sorts at Other Cinema where I’m going to show some excerpts to the video component from the 2001 issue of 8-Track Mind and then read some from the new issue. That’s going to happen May 4.

Okay, so the new issue is coming out, but you’re not going to stop there, right?

I see the magazine now kind of like The Who. It’s going to have about fifteen final tours and still keep going. As long as there’s inspiration, as long as there’s something that interests me and there are other collaborators who are interested in participating, it will have a life. And if any of that disappears, it won’t.