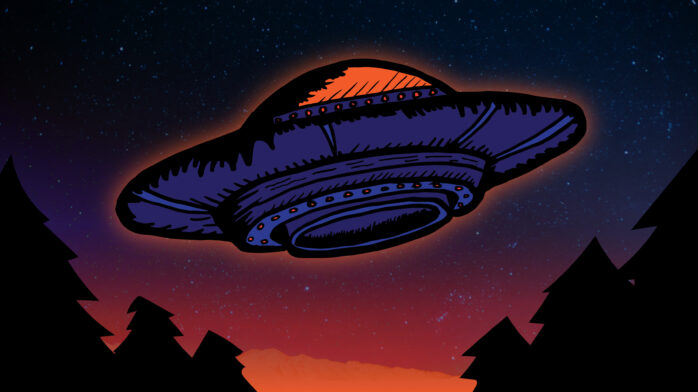 UFOs Are Real, and for Some Reason We’re Not Talking About It

Why facts often make less waves than fiction
By Miles Raymer / May 10, 2019 / Editorial

Quick question: did you see in the news recently that UFOs are real?

As it turns out, there’s a lot of freaky stuff happening in the skies recently involving unidentified, apparently technologically super-advanced aircraft doing things that aircraft aren’t supposed to be able to do. And it’s not just rumors either—the Navy confirms that this is happening, and that it’s investigating. UFOs are apparently real, but it seems like no one’s talking about it.

When I first read that Navy pilots have been encountering so many “unexplained aerial phenomena”—and have been so freaked out by those run-ins—that the Navy felt the need to roll out a new system for reporting and analyzing them, I literally couldn’t believe it. I actually thought that I had misread the article, because to me that seemed like big news. But it wasn’t the top story at any of the news outlets that I check on. I hadn’t gotten any iPhone notifications about it, there weren’t any memes about it in my Instagram feed; I only ran across an article about it when I was stuck on a slow-moving 7 train for long enough to scroll the Washington Post app all the way down into the “wild card” section. It barely seems to have registered.

To be clear, the news coming out isn’t that there’s proof UFOs exist or that they’re from outer space or anything like that. All the Navy’s saying is that they’re changing their official policies to make it easier to report any sort of unexplained aerial phenomena. On the surface, it looks like the kind of quirky bureaucratic kink a late night talk show host can get exactly one good laugh from, and some of the small amount of media attention it’s received has been of the eye-rolling, slow-news-day, “Here’s a real life X-Files for you!” nature. “Aliens ahoy!” says the Navy Times.

But this is real. Apparently since 2014 there’s been an uptick recently of Navy pilots encountering “unexplained aerial phenomena,” which is the Navy’s preferred nomenclature over the spookier-sounding “unidentified flying objects.” A spokesman for the office of the Deputy Chief of Naval Operations for Information Warfare told the Post, “unidentified aircraft have entered military-designated airspace as often as multiple times per month.”

What kind of phenomena are these exactly?

In some cases, pilots — many of whom are engineers and academy graduates — claimed to observe small spherical objects flying in formation. Others say they’ve seen white, Tic Tac-shaped vehicles. Aside from drones, all engines rely on burning fuel to generate power, but these vehicles all had no air intake, no wind and no exhaust.

“It’s very mysterious, and they still seem to exceed our aircraft in speed,” [Chris Mellon, a former deputy assistant secretary of defense for intelligence and staffer on the Senate Intelligence Committee] said, calling it a “truly radical technology.”

Maybe, you might be thinking, there’s some sort of atmospheric condition or neurological effect that makes highly educated fighter jet pilots think they’re seeing small spherical objects flying around at incredible speed and doing things no known aircraft are capable of doing.

But it turns out there’s video:

I can’t say I’ve ever been much of a UFO kook—I’m more kooky for UFO kooks themselves—but I find myself looking at seemingly solid concrete evidence that there’s stuff beyond conventional explanation happening in the sky above us, then looking at how few other people seem to have noticed it, and I’m starting to think I know how it feels to be one.

In an age where conspiracy theorizing has become our default mode of thinking—where wacko Internet memes have spawned real-world consequences like measles outbreaks and hostage situations at pizza restaurants—you would think the news that the U.S. military is seriously investigating a string of UFO sightings might make more noise. After all, the idea that something beyond our understanding is happening in the skies over America—and that the government’s trying to cover it up—is one of our nation’s core modern myths. Here the government is, basically saying a conspiracy theory that laid the foundation for our entire contemporary understanding of conspiracy theories is substantially true, and here you are reading about it, possibly for the first time, on a website for a music festival that regularly books freak shows and GWAR.

I have a theory myself: that the same part of us that makes us obsess over conspiracy theories is what keeps us from taking this news seriously—which, just to reiterate, is no less than the Navy admitting that fighter pilots are regularly encountering highly advanced, unidentified vehicles in the skies. As a species, we have a remarkable ability to have big, hard-to-deal-with truths shoved directly in our faces. We seem to actually prefer ill-founded rumors to verifiable data.

Every scientist on the planet can scream their heads off about climate change, while hurricanes and droughts ravage the land and the oceans begin to swallow our coastlines, and we can collectively point at a handful of dissenters as reason not to believe that any of it’s really happening. Meanwhile, one discredited doctor can start telling people—with no real evidence—that vaccines cause autism and, all of a sudden, once-eradicated diseases are staging comebacks of epidemic proportions.

I think we prefer myths exactly because they’re unbelievable. UFOs as a half-whispered legend swirling with mysteries and hints of suppressed knowledge make the world a more magical place to live in, and most of us can choose to believe or not believe in them depending on how useful they are for us to believe in at any given moment—a lot when we’re telling spooky stories around a campfire, not so much when we’re doing things like voting. “Unexplained aerial phenomena” as an actual fact is just something else to worry about, another existential threat in a world that can seem endlessly full of them. And if it turns out that our unidentified visitors are really top-secret next-generation aircraft from another country on Earth rather than from out in the stars, that would really ruin the buzz.

For three generations, ever since Roswell, Americans have wondered what would happen if word got out that the government had been hiding evidence that super-advanced unidentified flying objects were flying over us on a regular basis. Some people said it would cause a panic. Some people thought it would cause an outbreak of mass enlightenment. Who would have expected that the news would barely raise a collective shrug?

UFOs have played many roles in the American imagination over the years: symbols of wonder and of fear, of liberation and cover-up, of technology’s promises and threats. Maybe in the end the last thing we want is for them to ever be real.