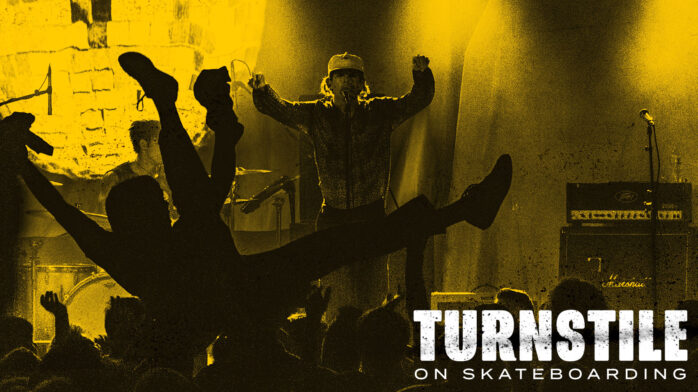 It’s no accident that hardcore punk and skateboarding have fed off each other moving through mainstream culture. The history between the two is rich, chock full of interesting reference points—like this image of Jello Biafra wearing a Thrasher t-shirt, or as seen in Glen E. Friedman’s iconic photo of the Beastie Boys at Washington Square Park. And while the scene around skateboarding has expanded into newer areas—hip-hop in the 90s, along with a surge in popularity around the 2020 Olympics—the hardcore connection will always be around.

Many bands, Turnstile among them, are comprised of skaters themselves as a result of said crossover. The energy spent skating has translated into their music; music and skateboarding often help young people discover a sense of identity, sometimes for the first time in their lives. Whether that identity as a hardcore kid or a skater lasts into adulthood depends entirely on the individual, but that’s not to say packing that stuff away and moving onto other things in life is a bad thing either.

When I’m out skating and see other 20-somethings on the street, though, I wonder to myself: “What exactly do they do?” And by “do,” I mean outside of pursuing a fulfilling career, maintaining relationships, and keeping their health intact. So when I found out a lot of members of Turnstile skated, I wanted to dive into something we both shared hoping to highlight the connection between hardcore and skateboarding. Frontman Brendan Yates was kind enough to open up about his roots in skateboarding with Riot Fest.

RIOT FEST: What is it about hardcore and skateboarding that makes them so closely related?

BRENDAN YATES: In my eyes they both promote a sense of freedom and individuality. They kinda served as a gateway to each other for me growing up.

If you could have any skater use a Turnstile song for a video part, who would it be and what song?

How do you feel seeing other skaters use your music in their videos—like the “Energy” video, which ended up on Thrasher?

It’s awesome. Especially when it’s with friends from the area doing great things, like Energy and others.

What was it like for you growing up as a skater in the DC area? What are the good spots there?

Growing up, if we weren’t just skating in the street in front of our house or the schools and nearby spots, we’d have to have someone’s parents drive us to parks or spots that weren’t so close. Attitude was the closest shop to us so we’d always go there for our boards.

It’s cool to see how many parks have popped up in the last decade that weren’t there when I was growing up.

Do you have a favorite skate video? What’s your favorite song from a video part?

Hard to pick one, but maybe Toy Machine’s Jump off a Building, or Flip’s Sorry (which has a badass soundtrack).

Prodigy’s “Breathe” in Rune Glifberg’s part is my favorite song. It was always fun going out and filming little parts with our friends.

Is it tricky trying to skate while touring, especially since injuries can happen out of nowhere? Have any of you ever had to play through a skating injury?

It’s not tricky, we always bring our boards with us. We’ve definitely all played through injuries at different points, some worse than others!

How involved are you with small brands in skateboarding? I know you helped start Baby Amy Magazine/Skate Co, and that you grew up with Ayman and Osama Abdeldayem, who run Carpet Company.

Yeah, those are just all my long time friends who work hard to make cool things that I’m super supportive of. Love seeing them put so much of their energy to something so creative and special.

How was it making the music video for “Bomb/I Don’t Wanna Be Blind”? What was it like working with big names in skateboarding like Atiba Jefferson and Ty Evans, as well as newer pro skaters like Kader Sylla?

Making that video was such a positive experience. Atiba and Ty wanted to make something for a while together, and when he got that dream team together it was amazing. We all just trusted the process and let it take us where it naturally took us as we went. Having Kader, Zach, and all of them involved to make it [was] so fun.