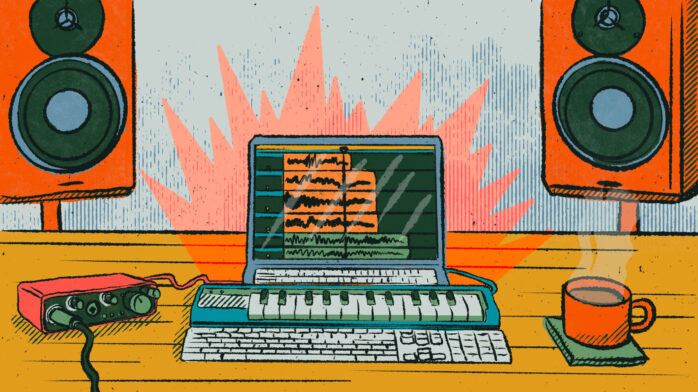 How to transform your computer, tablet, or phone into a powerful home studio
By Miles Raymer / April 29, 2020 / DIY, Editorial

It’s bad enough that the coronavirus nuked an entire touring season, messing up the income of professional musicians who rely on touring to make money in a streaming world. But it also severely fucks things up for who knows how many non-pros that just want to get together with their friends at the practice space to jam some shit out.

If you play in a band, you’re most likely a solo project for the time being. Lucky for you, there’s never been so much powerful digital home music-making technology at our fingertips as there is now—and with software getting more flexible, and virtual instruments becoming virtually indistinguishable from the real thing, going digital doesn’t mean you have to learn computer programming or go “techno” anymore. If you’ve spent your whole musical life doing nothing more technologically complex than plugging a guitar into an amp, you can still probably pick it up.

You’ll just need some help. I should know. A few years ago I left my last band and moved to a new city with nothing to make music with but a laptop, a MIDI controller, and a stubborn resolve to learn digital music making. After a lifetime of playing IRL and mostly analog, I threw myself into the deep end and figured out how to make bleeps and bloops like a (semi)pro. It was a pointlessly difficult experience, and I don’t recommend it. So instead, let me help you get up and running with your own digital recording project with as little hassle, and for as little money, as possible.

You can spend a lot of money building out a home recording studio. (Sigh.) But if you’re resourceful, flexible, and you already have a laptop/smartphone/tablet, you can start recording right now without spending any money at all. (You’ll just have a lot of constraints to get creative around.)

It doesn’t take much of an investment to open up a lot more sonic possibilities. There are only a couple of pieces of gear that you really need to get up and running, and there are good cheap versions of both.

A USB audio converter lets you plug IRL instruments and mics into your DAW. If you want to play guitar or sing or plug in your thrift store Casio, you absolutely need one. Don’t get psyched out by the $1000+ studio-grade interfaces you see on Sweetwater. Odds are for your needs you’ll be happy with something much more affordable, like something from IK Multimedia’s iRig line, which starts at just $39 for the entry level iRig 2. I love the iRig Pro I/O, which offers more inputs, MIDI functionality, and Lightning compatibility, but is still pocketable and reasonably priced at $149.

Technically, you can play virtual instruments–one of the greatest features of digital recording–without a MIDI controller, but it means using doinky touchscreen keyboards or mapping notes to your computer keys. Save yourself the hassle. For $50 you can get an ultra bare bones model that puts a real keyboard under your fingers that’ll let you play any of the thousands of MIDI compatible software plugins out there, literally millions of sounds. The $89 Arturia Microlab adds a splash of color and comes bundled with a bunch of really good software.

A digital audio workstation is your virtual studio, where you’ll record audio and sequence MIDI. Your virtual instruments, effects, and plugins will all live here too. Pretty much everything you’ll do will happen here. You can even use them to play live.

There are a few major DAWs to choose from, and they all do the same basic things, but in different ways, with different options, so you’ll need to choose one that suits you.

GarageBand is the easiest to get up and running with. If you’ve spent any time in a studio watching someone work in Pro Tools over their shoulder, you can probably pick it up in an afternoon. If not, it comes with lots of training wheels. And if you have a Mac, iPhone, or iPad it’s free.

That doesn’t mean it’s a toy. GarageBand does all the things that more professional-level DAWs do. It comes loaded with a bunch of instruments and features like pitch correction and automated drumming, and it supports pro-grade plugins. It’s the best choice for beginners, and while it has limitations (mostly stuff you only encounter only once you get pretty deep), there are songs on the radio that were made in GarageBand, so it’s worth considering.

Ableton Live is what all the pros use, and if you’re considering doing anything with digital recording after quarantine’s over, it’s worth investing your time in. The learning curve is steep at first, but there’s basically no limit to what it can do. Ableton’s constantly rolling out new instruments and sound packs (many of them for free), and it works with every plugin I’ve thrown at it. The company’s run by a bunch of extremely nice Berliners, so they offer a free 90 day full-featured trial version. On top of that, they currently have a 30 percent off sale running that brings the cost of the unlocked intro version down to $69.

Reason is, to me, the lovable weirdo of the major DAWs. Most of the others speak the same blandly efficient visual and interface design language. Reason, on the other hand, is literally designed like a massive pile of studio hardware full of knobs and patch bays that you can cable together. It’s slightly insane, but so is the quality of its synth sounds, which are in a whole other dimension. It’s not for everybody, but if you’re the type of person who gets their kicks from plugging things into other things into other things, Reason could be your path.

Pro Tools is expensive and a pain in the ass and it doesn’t have any features that you actually need that GarageBand doesn’t.

Soundtrap and BandLab are cloud-based DAWs that let musicians collaborate remotely, which is especially handy right now. I’ve never used either but they look like they could be cool.

Plugins are virtual instruments or effects, and they’re one of the big payoffs you get for learning how to use DAWS: Mellotrons, gamelans, and full symphony orchestras are now just a download away. So are vintage guitars, programmable rock drummers, and detailed reproductions of super-rare effects pedals you could never afford in real life. If you’ve ever wanted to make your own Sgt. Pepper’s/Brain Salad Surgery/Kid A but never had the budget, now’s your chance.

What specific ones you want depends on what kinds of sounds you’re looking to make. But there are enough plugins out there that you can spend the rest of your life digging through them. Here are a few of my personal favorites.

Arturia’s Analog Lab is the first third party plugin I owned, which was great because its super easy-to-use interface is perfect for noobs who don’t know their LFOs from their VCOs. (That’s a synthesizer joke.) It’s currently free to use until July 3, as is Arturia’s wildly powerful Pigments synthesizer which offers fine-grained control for engineer-brain types, but has plenty of lusciously designed presets for those of us with a thinner attention span.

If you’re planning on recording a lot of guitar, you should consider investing in Native Instruments’ Guitar Rig, which models a literal truckload of classic amps, pedals, and speakers with freakish fidelity. Usually it goes for $199, but right now it’s free with any of NI’s extremely fast and clean audio interfaces (which I use in my main setup), including the Audio 1 for just $109, or about the price of a halfway decent practice amp.

IK Multimedia, makers of the iRig, also make a plugin called T-Racks that’s widely considered THE mixing and mastering tool for once you’re ready to take your music from your DAW to the wider world. They’re currently offering it as a free download, along with a couple of huge synth collections and their AmpliTube amp emulator (which, just FYI, has a Twin Reverb clone that I love running vocals through to get an overdriven spring reverb-y sound).

If you really want to freak out on your new DAW’s sonic potential, Splice is like an app store of plugins, sound packs, loops, and other production tools. (For more samples and loops, check out Sounds.com and Output Arcade.)

YOUR IPAD IS (ALMOST) AS GOOD AS YOUR LAPTOP

If you don’t want to go all out and install a bunch of software and figure out which folder to put sound modules in or whatever, I don’t blame you. Try going mobile. It’s way cheaper, considerably simpler, and nearly as powerful.

The iOS version of GarageBand does a lot of the stuff a full blown DAW does. It even syncs up with other audio apps, of which there are a ton, many of them very good, many of them currently available for free (including Roland’s Zenbeats, AudioKit’s Synth One synthesizer, Arturia’s iSpark drum machine, and a bunch more.) Recently I set up a “mobile studio” with my iPad Mini, iRig Pro I/O, and Arturia’s insane MicroFreak synthesizer so I can record ambient music on my couch and since then I’ve barely touched the studio in my office that I spent all this time and money on.

No iPad? GarageBand, Native Instruments’ iMaschine 2 drum machine (my all time favorite way to program drums), and Reason’s entire suite of mobile apps can turn your iPhone into a serious pocket studio.

It goes without saying, but making music by yourself on a laptop/iPad/whatever isn’t the same thing as making music with a band. It takes more steps to get an idea from your head to the speaker, and you have to think ahead a lot, which can kill spontaneity. On the other hand, you can do things with a DAW–from the sounds you can produce to the ways you can layer them, chop them up, and tweak them–that are impossible with live instruments.

It’s best to embrace the differences. Think about it like learning a second language. If you normally start with a melody, try starting with the drums instead. Mess around with sounds outside of your usual range. Try making a song that sounds like early-90s Wax Trax. Try making a rap beat. Let yourself get weird.

Or just grab a drum loop, plug in a guitar, and bash away. Shit is flexible.

WHATEVER YOU DECIDE TO USE, LEARN HOW TO ACTUALLY USE IT

Keeping with the “second language” imagery, most people are better off picking up a few words of a foreign language before visiting where it’s spoken rather than jumping in and trying to figure it out on the fly. Same with digital music.

Just plugging into a DAW (or opening a synth plugin or a compressor or a sequencer) and hacking away at it is an extremely frustrating way to try and learn this stuff, and you’ll only ever grasp a tiny fraction of what it’s capable of. Fortunately the Internet has everything you need to learn, even if you’re not the type of person who reads manuals. All of the software and gear companies produce copious amounts of educational material for their products. A lot of them make ones that cover broader topics, like recording live instruments or programming drums. Or you can just type in literally any question you have into YouTube and find that some random bedroom producer in Saskatchewan made a video with exactly the right answer.

Which is great, because I’m not trying to write a book here.