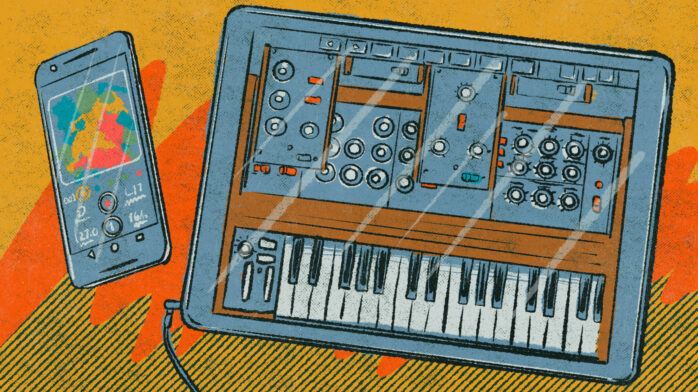 Free Stuff: Get Your Hands on Some Free Synthesizer Apps

Excellent free software from Moog, Focusrite, and more
By Riot Fest / March 30, 2020 / Stuff To Do

There’s been a lot of stellar freebies lately for musicians stuck indoors, like those free guitar lessons from Fender we mentioned last week. But if stringed instruments aren’t of any interest, you’ve got some great options in the keyboard aisle—Moog, Korg, and a slew of other synthesizer manufacturers are giving away all sorts of free apps and plugins to keep those stuck at home occupied.

We’ve collected the best of the bunch below for you—just keep in mind that most of these are limited-time offers. Start downloading and get modulating!

It’s not the real deal, of course, but Moog’s iOS version of its iconic analog synthesizer is a blast to mess around with—and, of course, completely free. It’s the sound that fueled artists like Parliament Funkadelic, Kraftwerk, and Gary Numan and comes with nearly all the bells and whistles of the original. While it’s definitely a bit cleaner looking on an iPad, we were able to have enough fun with it on a standard-sized iPhone (and you don’t have to pay $4.99 just to see what the fuss is all about, either). It’s free until March 31.

French audio tech company Auturia has a few different offers for anyone looking to sample their software. First up is Pigments, a free-to-use digital synth that’s available starting April 2. The app touts “practically unlimited modulation” with a steady amount of in-app tutorials to teach you the ropes. In addition, Auturia is offering a free synth/drum sequencer called iSpark for iPad users (it’s free until April 30) and a nice 50% off discount on their V Collection 7 of 24 keyboard plugins.

For those who are in the position to be staying at home during these challenging times, we want to help make it as easy as possible for you to stay creative.⁣ •••⁣ So, for a one-off Plug-in Collective special, we’ve partnered up with @audiothing to bring you the SR-88 plug-in for free as a limited-time giveaway for all members.⁣ •••⁣ SR-88 is a sample-based plug-in emulation of the Sound Master Memory Rhythm SR-88, a rare analogue drum machine from the ’80s.⁣ •••⁣ Learn more >>> link in bio⁣ ••• #WeAreFocusrite

Focusrite is offering one seriously cool plugin for those looking for some unique drum sounds: they’ve partnered with AudioThing to give out their SR-88 drum sample plugin for free. It’s based on a rare 80s drum machine called the Sound Master Memory Rhythm SR-88 and offers a variety of combinations for cool rhythm sequences. You can get one free of charge until April 24.

For anyone looking for an easy-to-use phone synth, KV331 Audio’s debut handheld keys are a great pick. The 8-voice polyphonic synth has over 300 factory presets to tweak and has a great layout for those with smaller screens (or bigger fingers). It’s usually $4.99 in the App Store, but is temporarily free for now.