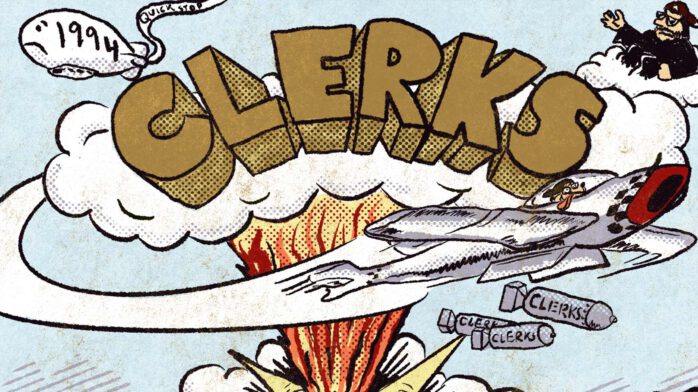 Kevin Smith has been the figurehead of a major cinematic/pop culture cottage industry for over two decades. Given that, it can be easy to forget that it all started with a modest, grubby little black and white film whose budget was less than the sticker price of some luxury cars.

Clerks, of course, is a cult classic, one whose influence quickly spread far beyond what anyone expected at the time of its release. It is a once-in-a-lifetime rarity: a low-budget “slice of life” comedy which has spawned sequels, a short-lived cartoon, a sustained following for Smith and his cohort, and endless imitators.

In some regards, Clerks was also the peak of 1990s indie film, even if some hipper-than-thou types would never concede as much. Its end credits even offer a shoutout to “Richard Linklater, Hal Hartley, Spike Lee, and Jim Jarmusch, for leading the way”. Looking at Smith’s position now, a hero to countless pop culture obsessives who’d probably sooner watch Return of the Jedi for the 388th time than bother with Stranger Than Paradise or Bamboozled, it’s wild to imagine him reverently under the sway of hip film school favorites (remember, this was years before Linklater made School of Rock and Jarmusch started making monster comedies), but the proof is there in black and white.

The friction between goofball populism and indie cool, however, is exactly what made Clerks a broad cultural phenomenon in a way that, say, Slacker or Henry Fool were not. It’s not hard to see the influence of any of the aforementioned directors on Clerks: Linklater’s relaxed attitude towards plot, Hartley’s mannered verbosity, Lee’s carefully observed mise-en-scène, and Jarmusch’s propensity for the flat and raw all figure heavily into Smith’s recipe. Where the characters in a Linklater film wax stoner-philosophical, though, Clerks’ titular pro/antagonists Dante (Brian O’Halloran) and Randal (Jeff Anderson) engage in wordy dick jokes and elaborate Star Wars observations, inviting in the geeks (and closet-geeky bros) who might’ve been alienated by the loftier flights of fancy in otherwise-similar films.

Smith was as prone to venerate, if not valorize, his generation’s nihilistic slackers as any other filmmaker of the era. Unlike some of his peers, though, he had little patience for the hipster gatekeeping that often came along with that. To put it in punk rock terms: if Down By Law was Richard Hell & The Voidoids, and Slacker is Hüsker Dü, then Clerks is Green Day circa Dookie: a little younger, a little poppier, and way happier to invite everyone into the big tent.

Like Dookie, Clerks is also emblematic of its moment in time. That makes it sweetly nostalgic for people who were of a certain age when it came out, but it also means that it might warrant a trigger warning or two for younger, uninitiated viewers. There’s plenty of casual misogyny and homophobia tossed around; Randal would almost definitely be considered an “edgelord” today. These character quirks and shortcomings, though, are honestly and thoughtfully observed, and truly reflective of the 1990s “alternative” culture writ large. Some of it might make the more sensitive among us cringe today, but that’s at least partly because we recognize our old friends, or maybe even our past selves, in Clerks’ motley crew.

Clerks continues to resonate despite these issues because behind all the scatology and general dudeliness is a film about the durability of friendship. Dante and Randal’s friendship, turbulent as it is, transcends trifling bullshit. Throughout Clerks, Dante is hung up on his ex Caitlin (Lisa Spoonauer), even though his current girlfriend Veronica (Marilyn Ghigliotti) is obviously a better fit. When Caitlin surprises Dante by returning home from school and being responsive to his ill-considered advances, Randal warns her: “break his heart again this time, and I’ll kill ya. Nothing personal”. He knows, after all, that he’s the one who will have to be around to clean up whatever mess is left from them resuming their affair. “Territoriality… he was mine first”.

The mess comes regardless of Randal’s warnings, and manifests itself physically in the movie’s climactic fight scene. After Randal unknowingly sabotages Dante’s chances with both women, Dante ambushes him. This surprise turn takes Clerks out of typical hipster-indie territory and into gonzo slapstick, complete with a hoagie roll used as a weapon. After they’ve worked out their aggression, Dante and Randal realize they’ve still got to salvage the convenience store in order to open up again the next day, and they clean it up together. It’s implied that this is just one spat in an endless, inevitable series; the next day will be more or less the same, but at least they’ve got each other to get through it.

More than any other part of the movie—yes, even the debut of Jason Mewes and Smith himself as Jay and Silent Bob, the eternal mascots of Smith’s empire—the fight scene hints at the Smith that would come. Almost all of his films are about the triumph of friendship, of camaraderie between goofball stoner (mostly) dudes. It’s not for nothing that Smith has continued to work with so many of the same people all these years: dude loves his friends, and underneath all the jokes about weed and shaking your enemy’s hand with a shit-stained palm, beats the heart of a big softie who just wants to tell stories about those friends. In that regard, Clerks might be Smith’s sweetest, most heartfelt movie, and the fact that you can say that about a movie that prominently features a woman accidentally having sex with a dead guy might be the most perverse thing about it.

We’re showing Clerks this Friday, September 11 at Riot Fest At The Movies. Grab your tickets now and enjoy snacks, limited-edition merch, and fireworks—plus a screening of Kill Bill Vol. 1 after intermission!