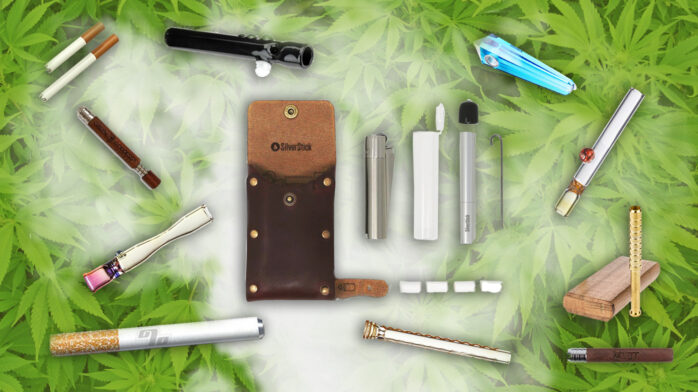 Time to end your search for the perfect one-hitter, dude Since I started smoking pot in the late-1900s, things have come about as far as the Internet has in the same span of time. Dealers offer lengthy menus of strains, packaged in odor-free baggies printed with nifty branded art. Dispensaries stock a dizzying array of tinctures, extracts, and edibles. And as far as methods of actually taking a hit of weed to the face, we may as well have been shit-throwing savages back then.

Vaporizers have shrunk from tabletop size down to something you can discreetly hide in your hand, and now come with Bluetooth connections and smartphone apps to dial in your preferred temperature down to the degree. Vape pens that would once have seemed unimaginably technologically advanced are now more or less treated as disposable. Consuming weed in this day and age is a technological marvel.

So why do I keep going back to the same kind of basic ass one-hitter that I’ve been using since I was basically a child?

It’s not that I’m a Luddite or a primitivist. I’ve got a Pax vape (the special edition one they made for the Weeknd that plays a tinny MIDI clip of “The Hills”) and a Firefly 2 that has its own iPhone app. I like gadgets, and the idea of bringing so many of the major advances in our species’ technological development–from microprocessors to computer software–to bear for the simple purpose of getting stoned. They’re gentle, effective, and they allow you to get stoned in public places way more discreetly than ever before. But there’s also something fundamentally unsatisfying about using them.

Maybe there’s something that bothers me about letting technology mediate the experience. Maybe it’s the lack of efficiency, like the seemingly interminable period of time (which is actually only a few seconds with most new ones) where you’re waiting for the heating element in the vape to warm up. Or maybe one-hitters are just the perfect device for consuming leaf-form cannabis and trying to improve on it is superfluous.

For instance, the one-hitter hit is the perfect unit of weed consumption. Working with small, discrete amounts lets you tailor your high precisely to the level you’re looking for. One one-hitter is enough to make things a little interesting. A couple will usually get a seasoned smoked nice and stoned. Crucially, you don’t have to worry about getting one of those rogue hits you get every once in a while with other methods where you realize before you even exhale that you just took a way bigger lungful than you meant to and you’re probably gonna be on your ass for the next hour or so, which can completely derail your plans if you’re trying to be a productive stoner, or simply trying to live a less couch-centric existence.

And while vapes are portable and discreet, so are one-hitters. I’m not trying to snitch on myself, but I’ve definitely brought a one-hitter and dugout to a lot of places where you’re not supposed to be smoking weed and used them without getting caught. It’s not quite as sneaky as a Pax, but you also don’t have to worry about getting high somewhere and leaving behind your $300 toy, which is nice.

And there’s such a thing as “elegant simplicity” that one-hitters have and other devices just don’t. They’re too streamlined to get bogged down by bad hippie aesthetics, and they don’t need the kind of smartypants Jony Ive-style contrived minimalism that’s shaping vape design. From a design perspective, the one-hitter/dugout combination–which combines storage, packing, and delivery in one compact, tactile-pleasing package–is hard to imagine improving on. I’ll admit that it’s possible to do some other interesting ways to approach it. My friends at SilverStick recently sent me their Leather Dugout set to try out. Their take on the one-hitter is a little more complicated, with filters you insert into the one-hitter for a cleaner, smoother draw. And it’s a lot more bougie, with its more conspicuously styled pipe, carrying case made out of leather from Chicago’s storied Horween Leather Co., and overall air of being slightly better (or at least better for you) than your basic bodega one-hitter. But then again I’m pretty bougie these days.

A luxury one-hitter setup is a lot like a gourmet grilled cheese, which sounds like a ridiculously unnecessary fancying-up of something that’s already elementally perfect right up until you actually try one and get your expectations blown all the way out of the water. My SilverStick has found a spot in my paraphernalia rotation–alongside the Pax and Firefly and other, more high-tech gear–that already seems pretty secure. But the basic old one-hitter with the classic cigarette camouflage that I bought for five bucks from the bodega isn’t going anywhere.