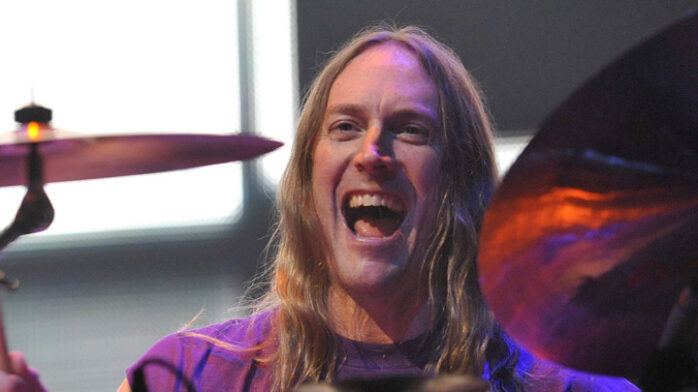 Danny Carey To Fill In On Drums For Primus

Tool drummer Danny Carey will be taking the place of Tim “Herb” Alexander for their Riot Fest Chicago and Denver performances, as well as for their intimate after show play at Chicago’s Concord Music Hall on Saturday, September 13.

Alexander is out for recovery from a recent heart surgery, but he’s certainly left his throne in good hands as Carey is well known for his impeccable chops. Primus bassist and lead vocalist Les Claypool elaborates on the situation and his excitement to be joined by Carey stating,

When Tim “Herb the Ginseng Drummer” Alexander had a minor heart attack a few weeks back we were all startled.  When he went in for an angioplasty the next morning and they said he needed a triple bypass we were all shocked.  Tim is the Ginseng drummer for a reason; he was always the non-meat eating, tea-totaling, mastodon of a man who could throw a football over a mountain, chuck a curveball at 89 miles per hour and could play his drums for hours on end without breaking a sweat, but unfortunately genetics and a taste for desert have a way of catching up and kicking one’s balls.   The great Herbinator has undergone his surgery and has come out with flying colors, but alas, it will be weeks before he can man the Primus percussion helm so we cancelled our September shows.  When the notion came up that perhaps we should try to pull off at least the two big Riot Festival shows in Denver and Chicago so that perhaps Tim could have some financial relief, we thought of one person (well two, but we figured it would be hard to get Stewart “Stew-daddy” Copeland out of his ivory tower).  The mighty Tim “Herb” Alexander is a poly rhythmic Viking of extreme and unique talent so the one person that we thought could step into his shoes and do it justice is the one and only Mr. Danny Carey.  Where as Herb is the stocky, Easter Island faced, boulder of a drumming human, at nearer to 7’, Danny Carey is the mighty redwood tree of percussion; towering over his kit like a golden haired noble sequoia.   I can’t wait to see that menacing grin of Danny’s shine out as we pound our way through HERE COME THE BASTARDS and THOSE DAMNED BLUE COLLAR TWEEKERS.  He’s a dear old friend and we are extremely excited to have him aboard and I would wager we are equally if not more intrigued than most by what kind of sounds are going to come out of the three of us once we actually get in a room together and do more than just consume fancy booze.