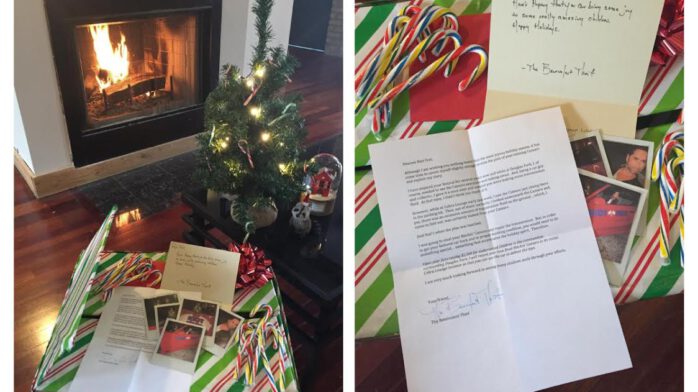 UPDATE 1:15PM CST: Toy donations will also be collected at the SOLD OUT The Lawrence Arms shows this weekend at Double Door. Fans attending the concert are encouraged to bring new, unwrapped toys geared toward kids 5-11. Toys can also dropped off at Cobra Lounge starting today though Thursday, December 16th. The toys will be distributed Monday, December 21st via Aldermen Cardenas’ 12th Ward office at the Little Village Boys & Girls Club and donated to local shelters in North Lawndale.

BREAKING 10:45am CST: Late last night we received a ransom note at the Riot Fest Office. It has very specific instructions for the safe return of the Riot Fest Bitchin’ Camaro.

Although I am wishing you nothing more than the most joyous holiday season, it has come time to unveil myself slightly enough to ease the pain of your missing Camaro and explain my story.

I have enjoyed your festival for several years now and while at Douglas Park, I, of course, needed to see the Camaro everyone was talking about. And, being a car guy and collector, I gave it a once over and noticed you were leaking some transmission fluid.  At that time, I didn’t think too much of it. However, while at Cobra Lounge early last week, I saw the Camaro just sitting there in the parking lot.  Thus, out of sheer curiosity, I looked underneath the Camaro and, yes, there was an excessive amount of transmission fluid on the ground… which, I come to find out, was certainly leaked from your Camaro.

And that’s when the plan was hatched.

I was going to steal your Bitchin’ Camaro and repair the transmission. But, in order to get your beloved car back and in proper working condition, you would need to do something special… something that accentuates the holiday spirit.

Therefore: Upon your fans raising $2,500 for underserved children in the communities surrounding Douglas Park, I will return your now fixed Bitchin’ Camaro to its initial Cobra Lounge location so that you can use the car to deliver the toys. I am very much looking forward in seeing many children smile through your efforts.

Your friend,
The Benevolent Thief

We received photos of the Riot Fest Bitchin’ Camaro as well, so we have every reason to believe it’s real and the person is serious.

To help with the kidnappers demands, we have set up a GoFundMe campaign to collect donations. Please help us get the Riot Fest Bitchin’ Camaro back and a the same time make Christmas a little better for a kid.