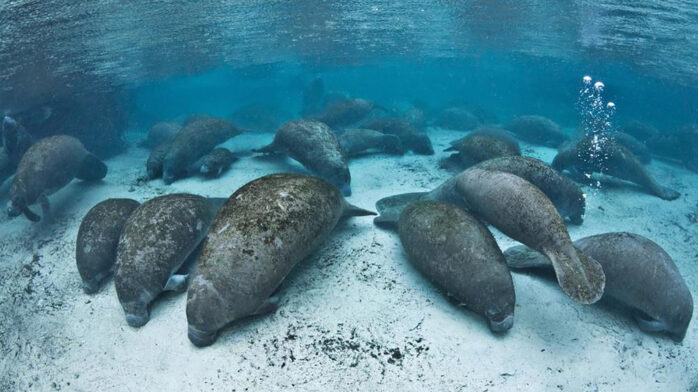 Manatees, sea creatures that once inspired the myth of mermaids for what one would assume were very drunk sailors, use their farts to swim.

How are they able to do that? Here’s an explanation: “Manatees do not have swim bladders to help regulate their buoyancy and stay horizontal in the water column. Several things help, including the dense ribs located towards the front of the body and no hind limbs. Another method used with great results is actually flatulence. Manatees release or store gasses in their system to drop or rise at will.”

Yep. Manatees use their farts to swim. An adult manatee will eat between 100 and 150 pounds of vegetation each day which means a lot of methane builds up inside. If they want to float to the top they hold it in and if they want to sink they let it rip.

We don’t suggest you try this method of swimming at home. We do suggest you watch these fun videos of manatees farting:

BONUS FACT: Though he didn’t mention their farting, even Christopher Columbus, that guy who “discovered” America, saw “mermaids” on his first trip to the Americas.

He wasn’t very impressed, writing in his journal: “in his first journey to the Americas, caught a glimpse of three “mermaids” off the prow of his “On the previous day [8 Jan 1493], when the Admiral went to the Rio del Oro [Haiti], he said he quite distinctly saw three mermaids, which rose well out of the sea; but they are not so beautiful as they are said to be, for their faces had some masculine traits.” (Voyages of Columbus 218).”