Since we’ve been so busy making our travel plans for the Royal Caribbean Total Eclipse cruise—where Bonnie Taylor will sing “Total Eclipse of the Heart” backed by Joe Jonas during the pivotal event of totality—we’ve asked rapper DVS to service the public in our stead.

Like most people, you’ve by now heard talk on your favorite Sirius XM Satellite Radio Gluten-Free Eggnog Recipes Channel about the impending “eclipse.” And like most people, you have begun digging a ditch in your backyard, placing your children inside, and slowly filling it with water to protect them. This is a good first step, but it’s only the first. You need as much information at your disposal as possible.

WHAT IS AN ECLIPSE?

“Eclipse” stems from the latin “Eclipse,” meaning “The portal has opened. Do not repent, it is too late for salvation.” This is partially why nobody speaks Latin anymore, it’s too sexy.

There are two main kinds of eclipses. A “Solar” eclipse is when J’AA-AAG, or “The Man Behind The Sun,” awakens from his restless slumber to boil the seas and turn animals against their masters. This is the most dangerous kind. When NASA was founded in 1958, President Eisenhower vowed “Now the truest and bravest men among us will, using technology, finally get to fuck the sun.” Eisenhower was once asked by Congress “Isn’t the sun hot?” Ike famously responded “Not during an eclipse. I’ll kill you.” That is why it says that on the ten dollar bill.

However, Eisenhower was sadly mistaken. All the astronauts who bravely threw caution to the wind by fucking the temporarily-darkened sun learned that, during an eclipse, not only is the sun still hot, but it is also poison. And magic. This is where we got all those dickless zombies you see in newsreels of the 60’s.

WHAT TO EXPECT DURING AN ECLIPSE

Q: Can I go to the eclipse? I did all my homework
A: I guess?

Q:Where IS eclipse?
A: Up

Q: Did you see Braveheart?
A: No, I been busy

Q: Mel Gibson is in it
A: I know, it says on the poster 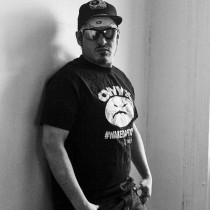 DVS is a rap mutant/Earth’s greatest supervillain/invented the remix. Read/listen to his guilt-free macrobiotic recipes at @DVSBlast and at DVSHipHop.Bandcamp.com.