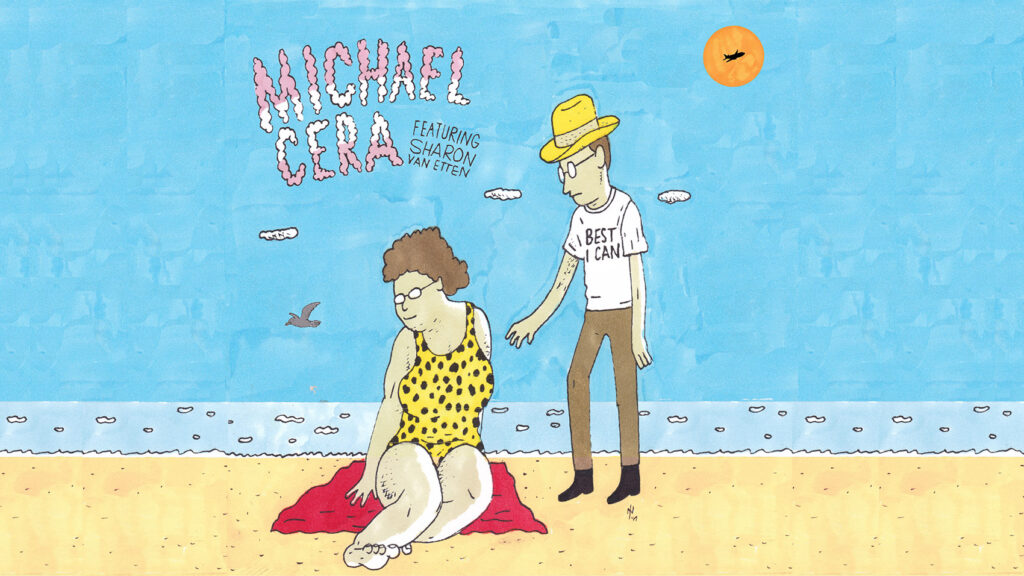 In recent years, Michael Cera has been proven more and more the renaissance man. Yes, he’s kept a toehold in the mainstream comedy world where he initially made his name, but he’s also dipped the rest of his toes into darker fare like Rick Alverson’s Entertainment and Janicza Bravo and Brett Gelman’s Lemon, taken roles on Broadway, and yes, made one of the more memorable guest appearances on Twin Peaks: The Return as Andy and Lucy’s son, Wally Brando.

Less celebrated to date (though it seems he’d just as soon keep it that way) is Cera’s work as a musician. Though he’s been quietly dropping soundtrack contributions here and there since 2007’s Juno, they’ve been little ballyhooed. Three years back, he slipped an album of home recordings, True That, onto Bandcamp with zero advance fanfare, and if interviews at the time (including one done with this writer) were any indication, he would have been almost as content had nobody noticed.

Now, Cera has completed the score to a new documentary, Dan Sickles and Antonio Santini’s Dina, which has been making the film festival rounds this year, and he’s also recorded a song with Sharon Van Etten, “Best I Can,” to be released roughly in tandem with the film (Pitchfork premiered the music video, also directed by Dan and Antonio, but feel free to play it below while you’re reading). We got Cera on the phone for a few minutes to talk about the film and the song (it took every reserve of inner strength we had to not ask him if we’d ever get to see more of Wally Brando, but David Lynch is probably the only person who knows the answer to that, anyway).

MC: Actually, it’s not. It’s my third. I did some music in 2008 for a movie called Paper Heart, and there’s a movie (Avenues) that my friend Michael Angarano made a couple years ago. It hasn’t been released yet, but I also scored that.

RF: Ah, okay. So, you’ve been around the block a couple times.

MC: Yeah, in a sense. None of those were very ambitious musical endeavors. Dina is also not that high-ambition, in terms of production. The music I made for it was something I felt I could tackle.

RF: You didn’t find it daunting to consider just how much music you had to get together?

MC: Well, the thing about this project is that it didn’t really need so much music. It’s a very dry, intimate documentary, so they kind of didn’t want too much; if it was overly scored, it would take something away from the feeling of the movie. It’s just kind of here and there, just a few pieces I did. The song “Best I Can” was proposed for one sequence of the movie, a montage, but it was ultimately rejected, which is why I was hoping to release it separately and give it some of its own life.

RF: “Best I Can” was a collaboration with Sharon Van Etten. Something else the two of you share is that you both made cameo appearances on Twin Peaks: The Return. It seems unlikely, since you appear in different episodes, but that wouldn’t happen to be how the two of you met?

MC: No, Sharon and I have shared a rehearsal space together for a few years, but this is the first time we’ve ever collaborated in any way. I thought she would bring a lot to it, and bring the right feeling. She’s the first person I thought of for the lead vocal, and she was gracious enough to do it.

RF: You tend to keep pretty busy. What drew you to this movie in particular?

MC: I just loved it. I saw it at kind of a “friends-only” screening, because the editor of the movie, a really close friend of mine named Sofia Subercaseaux who I’ve worked with on a few films, was having a screening early on, to see how it would play with people. I just fell in love with it, and asked if they’d consider letting me contribute some music to it. I felt like I had a handle on what kind of music would suit the movie. It just felt kind of natural to me.

RF: Dina is, at heart, a real-life love story between two people with mental disabilities. When you first heard the idea behind it, were you at all worried that it might be exploitative, or at least be perceived as such?

MC: No, but I hadn’t really heard the idea before seeing it. I saw it cold, though the guys who made it, Dan Sickles and Antonio Santini, sort of talked about it a little before screening it. It’s not exploitative at all; it’s a very personal film for them. Dan grew up with Dina; she’s been in his life since he was a small kid. His father ran the group, the Aktion Club, that Dina and Scott both belong to in Philadelphia. Dan’s father was sort of a father figure to Dina, as well. He recently passed away, so I think that the film is, in some way, a tribute to his dad, as well as a love letter to Dina.

It’s not exploitative at all, in that sense. What’s amazing, though, is how personal and intimate it is. You’re very inside Dina and Scott’s relationship. When you’re watching it, you kind of can’t believe how inside they were able to get.

RF: Sure. It’s very striking how they were able to get these really beautiful shots in the context of a documentary.

Yeah. I think they were somewhat influenced by Ulrich Seidl, who made the Paradise trilogy: they’re like this hybrid, where they are documentaries, but they feel very composed at times, and you wonder how he did it and what the process was. I think that inspired their approach.

RF: Back to the “Best I Can” video, which Dan and Antonio also directed: neither you nor Sharon appear in it, instead giving screen time over to Dina, Scott, and their friends. What inspired that choice?

Well, I wasn’t too involved in the video, actually. The guys just thought it would be nice to make a video for it, and I told them to go ahead. I totally see the function of the video working as a companion piece to the movie, but I’m also just glad the song is being released at all. I kind of wanted people to have a chance to hear the song, and for that to have its own life. I tried to make a balance happen with the lyrics of the song, where it sort of pertains to Dina and Scott’s story, but it’s also universal enough to stand on its own as a song.

RF: Are you working on more music along those lines right now, either collaboratively or at home by yourself, as with True That?

Not in a very focused way, to be honest. I don’t have any ambition or agenda with music; it’s just more of an outlet for me. I have the luxury of not making my living with it, which I like. I grew up with music, and I just didn’t want to lose it as I got older, but you don’t have to be a career musician to have it in your life as an outlet.

RF: Right, it’s just something you can share, or not, as it comes.

For me, it’s always a question of whether it’s worth putting out or not, but there’s a chance that some day I could amass enough songs that I feel good enough about to put out as a collection. I’d be happy to do that, if I ever get to that point.

We’d like to remind you that “Best I Can” is available now on iTunes, as well as the usual streaming services, and that there is always money in the banana stand.