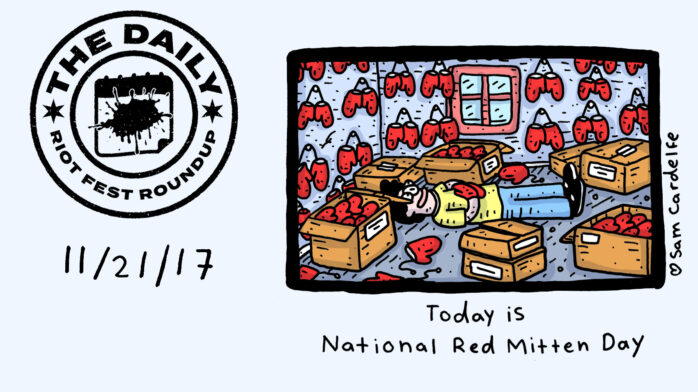 We’d like to congratulate ourselves on this, the 100th episode of the Daily Riot Fest Roundup. Does this mean we get to go into syndication finally?

Once again, just like last year and the year before, Riot Fest has produced an Oscar contender. Ladies and germs, we proudly present: Angels with Filthy Riot Fest Tickets.

Check out our new line of Black Friday Doorbusters, you cheap bastard.

Destroy Your Piggy Banks, Black Friday is Nigh

If you click on this to look at pictures of Betsy, the Riot Fest Adoptable Puppy of the Week, you own her. Them’s the rules.

Jumping Jupiter, is there anything Weird Al can’t do?!

Welp, all the War on Xmas shows are officially SOLD OUT. There may be a few tix released day of, so start camping out now. See you soon!

Riot Fest would like to wish a happy 49th birthday to the singer of Beach Slang if he was dyslexic, aka Alex James, the bassist in the Fab Four of Britpop, Blur.

And, to keep it PC, here’s word from that other camp…

The Fab Four of bands that feature every member playing a kick drum at all times, The 4onthefloor, needs your help, people. Give these guys a helping hand, as their legs are probably very tired all the time.

Do we know any bagpipers in the MPLS area?

Asking for a friend.