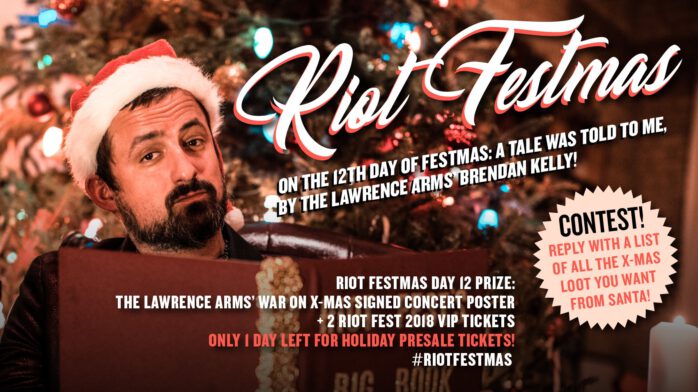 On The 12th Day Of Festmas: A Tale Was Told To Me, By The Lawrence Arms’ Brendan Kelly

Few #RiotFestmas traditions have stood the test of time quite like the traditional reading of The Night Before Christmas by a comforting and familiar voice. So we reached out to the local musician with the most comforting, silky smooth timbre available to us. And when we couldn’t get a hold of Josh from the Smoking Popes, we found that The Lawrence Arms’ Brendan Kelly could serve as a most adequate plan B.

What do you want Santa Claus — or Hanukkah Harry, your step-dad, or whoever supplies your late-December loot — to selflessly bring to you this year? Presume we’ve all been nice, post your Chrismukkah list to our Facebook, Twitter, or Instagram, using the hashtag #FestmasList. If we announce your name this evening at 7:00pm CST, you’ll win a couple of posters from The Lawrence Arms’ War on X-mas shows last weekend (including one signed by all of TLA), and a pair of Riot Fest 2018 VIP tickets.

More info on THE HO HO HAUL #RiotFestmas grand prize and how to save money on tickets to Riot Fest 2018 is below. But first… Huddle up the loved ones (and maybe a few people you dislike) while Uncle Beex tells us a tale…

If for some reason you don’t win this contest, be sure to enter THE HO HO HAUL grand prize sweepstakes. For the chance to win all of the other prizes from the 12 days of #RiotFestmas, as well as a pair of freakin’ Deluxe VIP passes to Riot Fest 2018, go to here. That’s over $3,000 worth of crap that won’t be under your tree tomorrow!

If December 25 comes and goes and you haven’t won anything, you’ll be glad that you went ahead and saved money on Riot Fest 2018 Holiday Presale Tickets. There is only 1 Festmas day left in which to be fiscally responsible! We’re not really sure how else to put this to you. We’ve done all we can.

Watch this space later today for an exclusive Riot Fest holiday interview with Joey Ramone’s brother, musician and author Mickey Leigh. We discussed the release of a new 7-inch featuring a couple of solo Joey versions of the Brain Drain classic “Merry Christmas (I Don’t Want To Fight Tonight)” (including the original bedroom demo of the song); and we talk about how two Jewish boys in Queens used to celebrate Christmas in the early 60s.