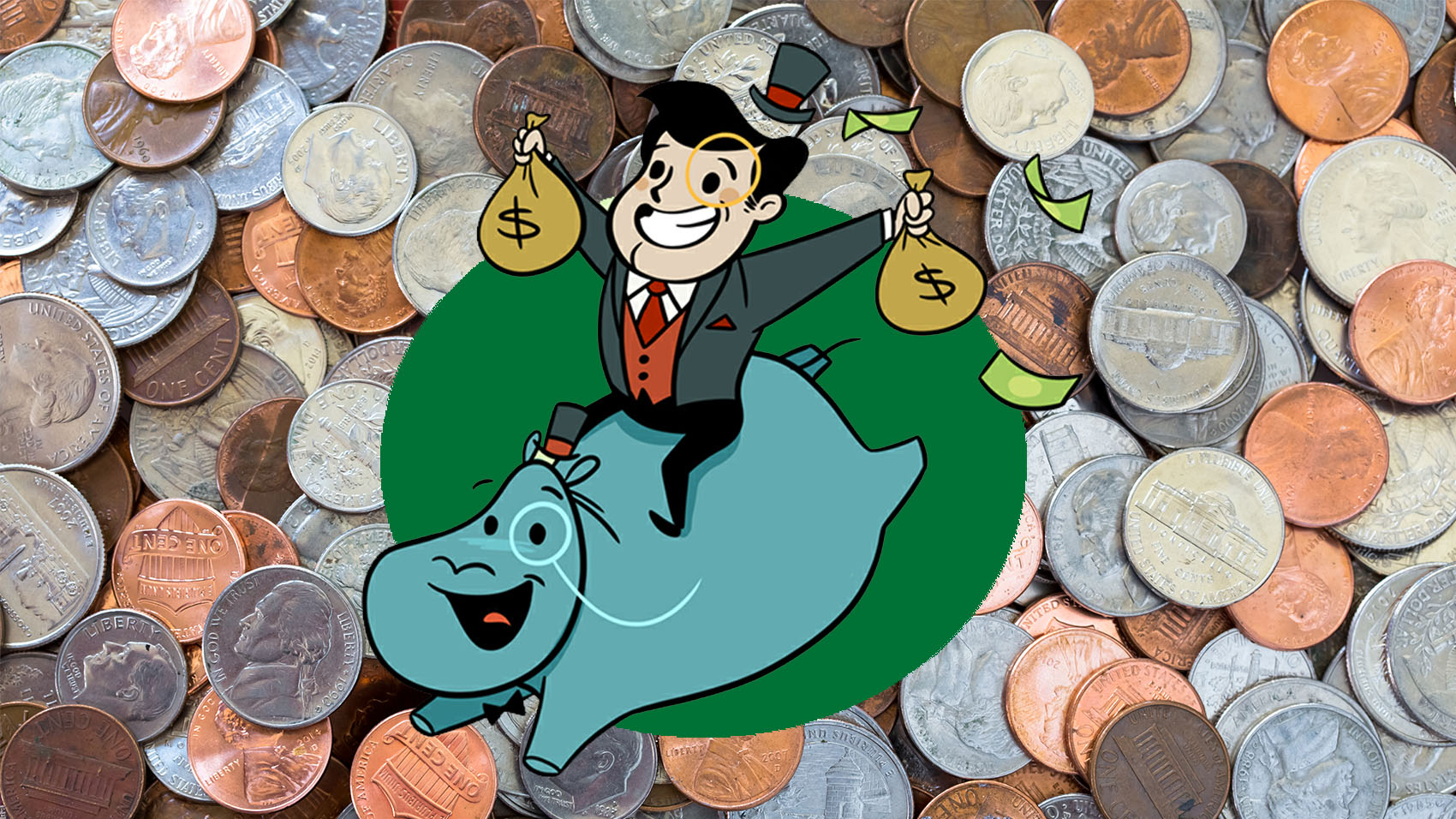 Cold weather has a way of shrinking down the scale of our worlds, and with the temperature staying well south of freezing recently I’ve been on the lookout for things to keep my mind occupied that involve moving my body out of my comfortable and cozy bed. On a frigid recent afternoon after a particularly intense Netflix binge that left me looking for a new kind of brain candy to catch a buzz from, I opened up the App Store on my iPhone and found one that seemed like it could get the job done so well that I might never leave my bed again.

AdVenture Capitalist is the name, and judging by its prominent placement on the App Store’s listings (as well as a shockingly high 4.7 star score from a whopping 47 thousand user ratings), it’s probably one of the most beloved mobile games on the market. It’s also the closest thing to a digital drug developed by the tech world thus far. 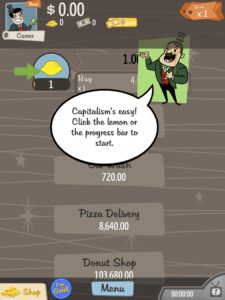 AdCap, as it’s known to users, isn’t a lot to look at. The mobile gaming revolution has produced some truly beautiful works that a lot of people can call art with a straight face, like the dreamlike puzzler series Monument Valley. AdCap isn’t one of them, and to its credit it doesn’t seem to even entertain those aspirations. Its no-frills interface consists of cartoony icons (a lemon, a newspaper, an oil derrick) representing different businesses that you virtually own (a lemonade stand, a newspaper delivery service, an oil conglomerate), as well as an assortment of progress bars and buttons… And that’s it. After you unlock all of the available industries — which takes just a few minutes — the screen doesn’t change, apart from the numbers tallying up. You never see a map of your oil company’s fields opening up, or get to watch the hockey team you acquire in action. Aside from the motion of the progress bars and the occasional flashing button, there’s not even any animation.

In theory, the goal of AdVenture Capitalist is to grow from a simple lemonade stand owner into a business mogul controlling enough dollars to make the mind boggle. Numbers like duotrigintillion (or 10 to the 99th power) that are larger than the sum total of atoms in the universe. In practice, you don’t do much more than press buttons to keep things moving and growing, while adding on upgrades to increase your score. If you have the right kind of brain — which, judging by the App Store reviews, a lot of people have — this bare-bones style of gameplay can suck you into a terrifying level of engagement that most flashy 3D graphics-enabled games only dream of.

“Fun” isn’t the right word for what I got out of AdCap, but it kept me coming back. It turns out that there’s something wildly addictive in watching numbers multiply, and in accumulating vast amounts of virtual wealth that has no real world value — nor hardly any use in the game aside from plowing it back into your virtual businesses, for that matter. (You can buy new outfits for  your tiny avatar that sits in the upper left corner of the screen, but it’s not actually much fun.) If you pay attention, you can feel a little burst of brain chemicals release every time your profits jump up to a new level of arithmetic ridiculousness. It’s the same jolt that humankind’s most habit-forming vices are built on. 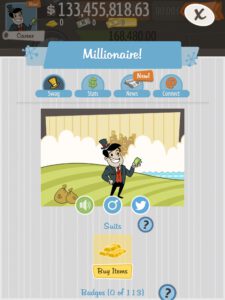 I can attest to the power of that buzz. AdCap wasn’t exactly fun — and it definitely wasn’t interesting — but I soon found myself playing it all the time, tapping buttons and watching numbers climb as I watched movies or talked on the phone to friends IRL. Having played the game, I finally understand the compulsion for accumulation that drives the wealthy: The more money I collected, the more I wanted. It was definitely a type of high, but the dirty kind that you don’t like to tell other people about.

As its name not-so-subtly implies, AdVenture Capitalist (and a legion of similar games like AdVenture Communist and Realm Grinder) uses its addictive qualities to make you sit through advertisements. In exchange for watching in-game ads (mostly for other mobile games), you get boosts that can double and redouble your earnings. The ads are typically so short, and their effects so powerful, that once you get into the game it almost doesn’t make sense not to watch them.

As it happens, I’ve been reading Tim Wu’s book The Attention Merchants, which is all about how our attention has been commodified, bought, and sold by everyone from 19th century French poster makers to Facebook. AdCap is a strikingly naked example of the attention economy in motion. If you’ve read The Attention Merchants — and I highly recommend you do, especially if you’re the type of person who writes Facebook rants about the evils of Facebook — it’s almost uncanny. Seen from that angle, AdCap seems hideous and slightly terrifying, but in a similar way that animals evolving to exploit an ecological niche can become hideous and terrifying. It’s basically the naked mole rat of the attention economy.

Unlike the naked mole rat, so-called idle games like AdVenture Capitalist aren’t content to stay in their little niche. The idle game genre (and its close cousin, the tap game) are multiplying like crazy across the App Store, asking for little more than as many screen taps and seconds of your day as you’re willing to give them in exchange for sitting through advertisements that will pay for the next generation of clones. I felt like I’d had a peek at the future of gaming, or at least one of its futures, and it looked like one of those episodes of Black Mirror where you walk away from it saying, “That was a little on the nose,” except that it was real, and much less exciting than a visit to San Junipero, or a ride on the U.S.S. Callister.

In the end, it was AdVenture Capitalist’s sheer addictiveness that made me give it up. The compulsion to open it whenever I had even a split second of free time got a little scary, so I finally went cold turkey and deleted it off my iPad entirely. Then I went back to spending all day watching shitty movies on Netflix. For the first time ever, it felt like the healthy choice.