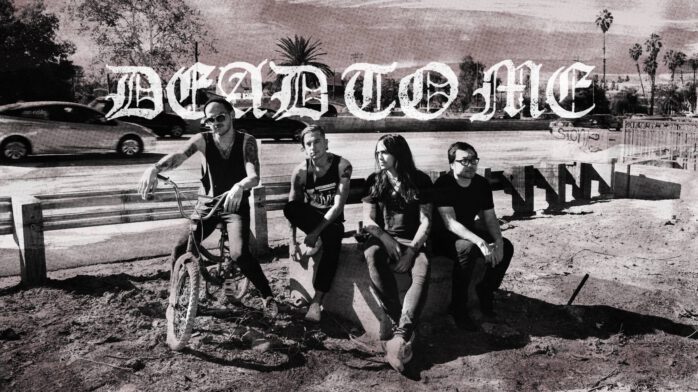 Dead To Me Is Never Going To Die 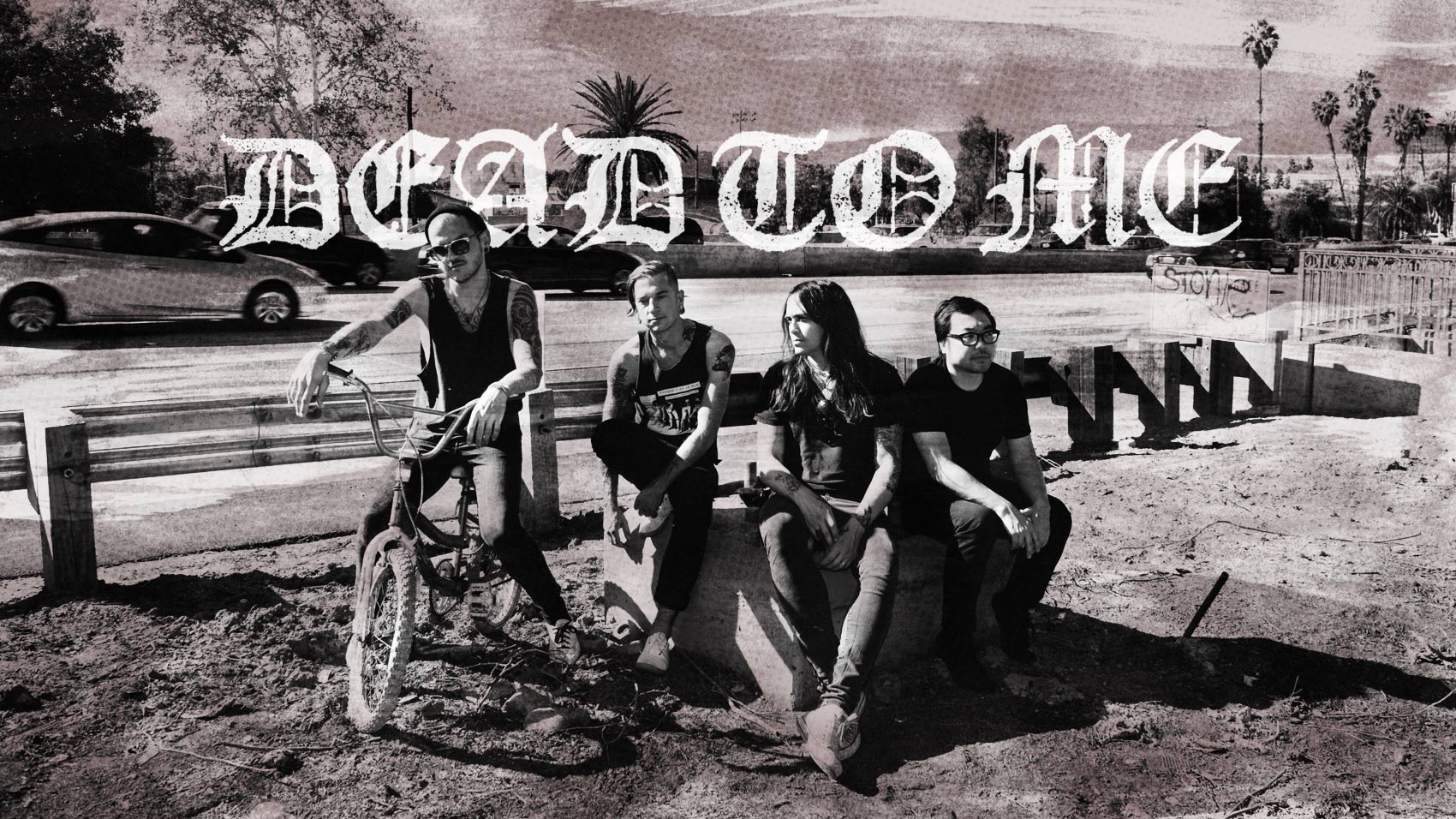 The career arc of Dead To Me is one that, for better or — often — for worse, was totally unplanned. Formed in the mid-2000s by former One Man Army vocalist-guitarist Jack Dalrymple along with bassist-vocalist Tyson “Chicken” Annicharico and drummer Ian Anderson, the guys quickly got to work on what would become their debut album. The result, 2006’s Cuban Ballerina, was a sharp piece of punk, one that nimbly defied categorization. The melodies the band crafted were effortlessly hooky, recalling pop-punk without the juvenile sneer, while injecting bits of ska; the kind found on Clash records instead of those from any third-wave revivalists. It was a record that blasted forward in a mere 25-minutes, sounding inspired and referential to punk’s past without ever devolving into staid, predictable genre worship.

After their follow-up EP Little Brother, Dalrymple would leave the band, but his former bandmates would soldier on with Nathan Grice, cutting a record that was far more dub-inspired than what came before. But like Dalrymple before him, after African Elephants, Grice would soon leave, and the band would rework its lineup. By this point, Dead To Me began to resemble a luxury home resting on an eroding coastline: At any second, it could be washed away entirely. Following the release of 2011’s Moscow Penny Ante, it seemed that, finally, all those shakeups had gotten the best of them. The band slowly retreated from sight, and it seemed as if — after three records and a handful of EPs — Dead To Me had finally met their demise.

I want to be the band that has good songs, but actually sings about shit that matters… real shit.

Then in late 2014, the band was showing signs of life. Dalrymple returned to the fold after a six-year absence, and alongside guitarist Ken Yamazaki, it appeared as if Dead To Me was finally getting its feet on stable ground. The band played shows sporadically, working on new music until the I Wanna Die In Los Angeles EP surfaced in 2016. Those three songs were as charged as anything the band had done before, showing that no amount of time off could soften their approach. And at the center of it was Annicharico, singing bluntly about his newfound sobriety, forcing himself to be accountable to his band, his fans, as well as himself, as to what happened during the band’s absence.

“The lyrics on that last EP were certainly about accountability,” says Annicharico. “I want to be the band that has good songs, but actually sings about shit that matters… real shit.” The EP’s title track put Annicharico’s issues with drug and alcohol addiction on full display, a theme he’d touched on before — as far back as Cuban Ballerina, no less — but here, it was something different. It wasn’t just a swearing off of substances, the song was a constant reminder that any future slip-up would be his last. “That is the reality of addiction and alcoholism,” says Annicharico. “It’s very rare that someone gets sober and stays sober the first time. It’s really fucking common that there’s a lot of ups and downs.”

During Dead To Me’s lifespan, it became common for bands — especially of the pop-punk variety — to use booze as a focal point of their songs. It became rote for punk bands to sing about drinking, be it as a liquid salve or as a simple stand-in for unity, but Dead To Me never partook in these simple slogans, instead showcasing the toxic underbelly that so many bands never dare to touch. “I do like that there’s at least one example out there of a dude that had a hard time, got better, fucked it up again, got better, fucked it up again, and, currently, is doing the best he’s ever done,” says Annicharico. And now, with the release of their new single, “Fear Is The New Bliss,” Dead To Me has shaken off the past and announced their return.

Compared to the material on I Wanna Die In Los Angeles that put Annicharico under the microscope, “Fear Is The New Bliss” zooms out, looking at the current sociopolitical climate and examining how we interact with it. While plenty of punk bands have used Donald Trump’s presidency as the framework for new material, Dead To Me explores our own complicity in how the election was swung… by all of us gawking at the looming disaster instead of working actively toward solutions. “There is a certain amount of blood on our hands,” says Annicharico. “The only thing that Americans love more than watching a train that’s about to wreck is posting about it. Everybody was checking in. They wanted to watch this. There was some sick part of them that wanted to watch that train wreck.”

The only thing that Americans love more than watching a train that’s about to wreck is posting about it.

“Fear Is The New Bliss” is the first taste of Dead To Me’s fourth album, which the band is recording with Chris Dugan, who engineered records like Green Day’s American Idiot and Iggy Pop’s Skull Ring. From there, the fellas plan to tour in support of the record, approaching a kind of full-time version of Dead To Me that hasn’t existed since the start of this decade. “Anything we’re going to be doing is going to seem like a lot compared to that, because it was nothing for a long time,” says Annicharico.

While plenty of bands get back together and record new music, with Dead To Me, it feels like there’s more skin in the game. For all their ups and downs, the band has ultimately served as a necessary lifeline; and now, they’re more driven than ever before. “I would never want to be one of those bands that reached a certain point and then started phoning it in,” says Annicharico. “A) because I don’t want to see that and B) because I feel like we wouldn’t just be letting ourselves down, we’d be letting down the people who like our band. I hear from kids at shows who have trouble with addiction and drinking, and I don’t want to let those fuckers down.”

Annicharico borrows a phrase from recovery meetings he visits, discussing the concept of “staying in the solution.” The idea being that, if you can see others functioning in a healthy, normal way, you can achieve it too. “There’s plenty of information out there about what the throes of drug addiction are like,” says Annicharico, “But I’m interested into turning the narrative into what happens after you get better. I’m interested in sharing that message with people.” It’s why Annicharico boldly claims that their next record will be the band’s best. He’s worked hard to get where he’s at, and he’s working even harder now… to show what can happen when you are given a new lease on life. “I want people to be like, ‘Fuck. If that dipshit can do it, maybe I have a chance.’”
dead to me fat wreck chords Music