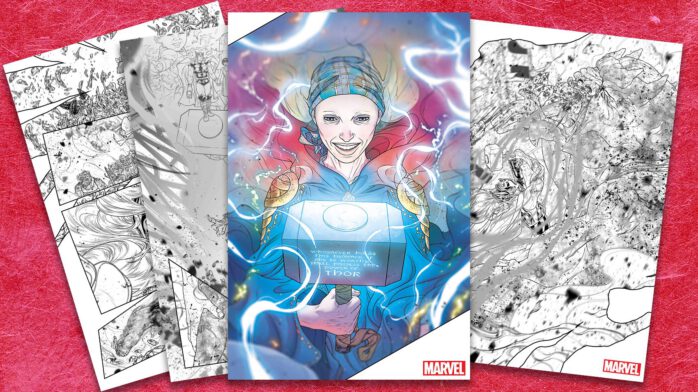 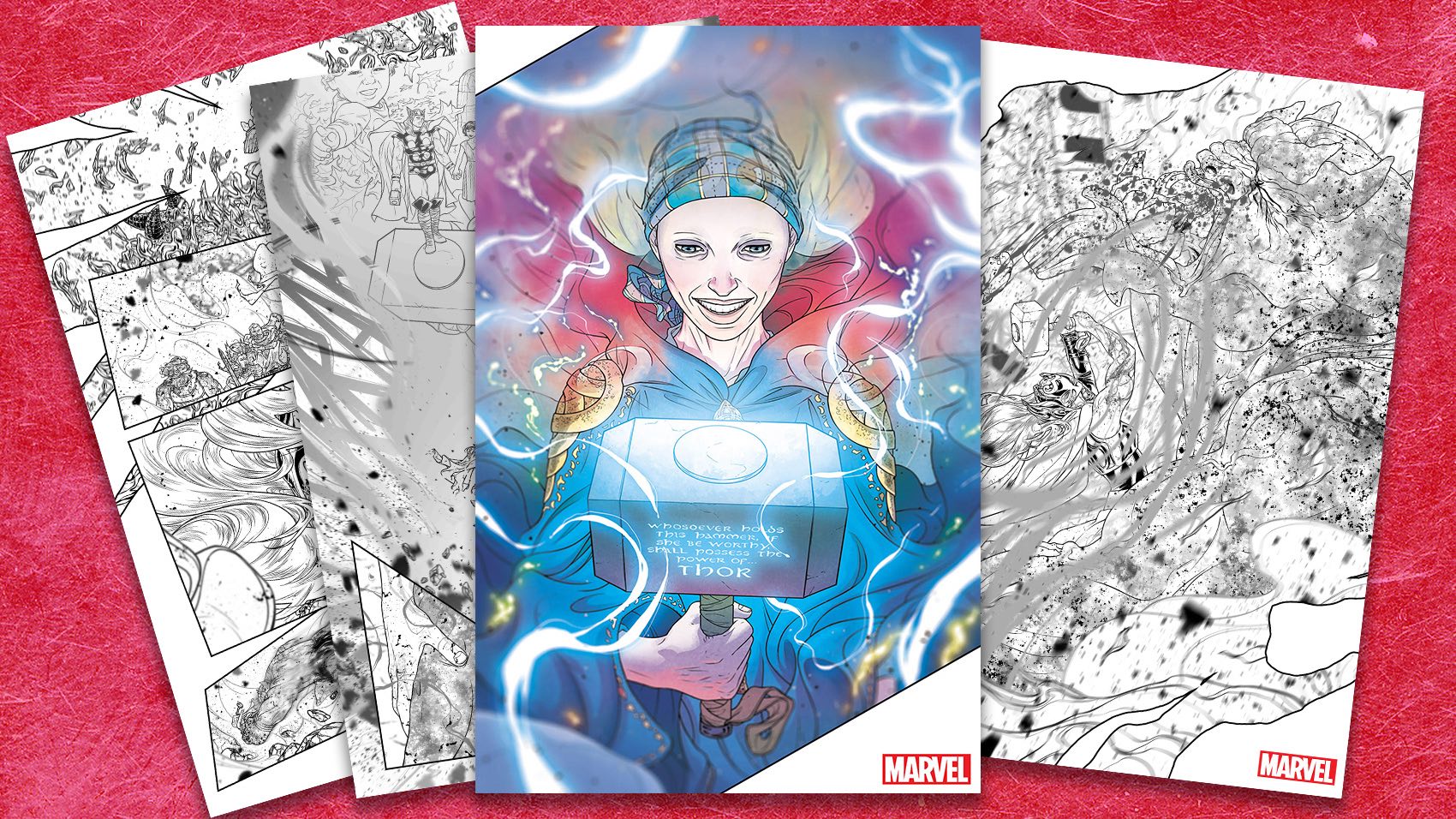 By Odin’s beard, isn’t Thor a chick now or something?

Well, yes, in a way. Mjolnir has found Jane Foster, the mortal human doctor (and former Thor flame) worthy of wielding the universe’s fiercest mallet, which lets her swap stage four cancer and a chemo i.v. bag for the rippling biceps and Asgardian arrogance required of a thunder god. Unfortunately, in her case, what makes her stronger is also killing her, and each time her Thor saves the realms from smiting each other, as petty gods are wont to do, Jane Foster inches closer to the grave.

It’s a Hel of a premise, really. Juxtaposing the weakness of flesh against the power of will could sound a bit on-the-nose out of context, but writer Jason Aaron, who’s helmed Foster’s run in The Mighty Thor, is no amateur. Yes, we have Marvel heroics in spades: Jane puts her own survival instincts on hold to save the universe from the likes of a bullying oil company, the gimp-suited evil genius Oubliette Midas, and the sphincter-like fists of Mangog. Despite chemo coursing through her veins like thunder, Jane willingly takes up the hammer to shield a cohort of niggling deities from their own convoluted crossfire. In the words of Lady Freyja, “In the war of realms, gods must prove themselves worthy.” And aye, she does.

Enter this fresh-faced Thor, wishing she could consult her own Wikipedia entry between bouts of inter-realm ass-kicking. Yes, she’s a woman. But her gender is secondary to the self-awareness she brings to the table. Her outsider’s perspective is free of grudges and historical baggage. Her demeanor may be fodder for gendered jokes and misplaced assumptions, but don’t call her Lady Thor. As she tells the Shi’ar gods, “‘Tis just Thor. I’m not, nor will I ever be ‘your lady.'” Underestimate this god and you’re in for trouble with a capital Þ. 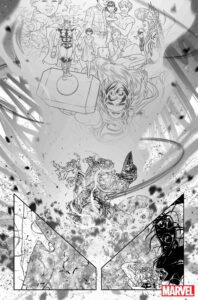 So how does this stack up against other Marvel character switches? Marvel is no stranger to identity-revising retcon. In recent years, they’ve made Captain America a black man, Ms. Marvel a Muslim teen, and brought Iceman out of the closet. All of these arcs are awesome ways by which to shove some much-needed heterogeneity into the faces of that noisy contingent of petulant cocksplats who contend that diversity in comics is a sales-subverting gimmick.

What’s better than upping the level of variety amongst our super-heroes? Completely and utterly normalizing it, which The Mighty Thor has done admirably.

In the books, the craziest thing about Jane Foster taking on the mantle of Thor is that Mjolnir chose a mortal. Donald Blake was the God of Thunder before Odin transformed him into a handicapped human for a little lesson in humility. Even Volstagg, Asgard’s most rotund warrior, trades his bloated-tick physique in for a more muscled frame and a beard made of rage as War Thor. Little Jane Foster, however, is just a doctor from Staten Island who can still maintain enough empathy to keep the god’s unbridled egos in check.

Immortality, royal lineage, sweet mutations and waggish posturing all make for a fun Marvel hero, but none of those traits is necessary. The key to the recipe is actually pretty simple: a sense of duty and self-sacrifice. Jane Foster doesn’t remember the last time she slept, but as long as wars are raging, she just can’t put down that hammer. Besides, as she quips, “when you’re a 90-pound woman dying of cancer, it does feel pretty good to punch a god in the face.” And dying, she most assuredly is. Each time she picks up the hammer, she lessens what’s left of her time on earth. I’d imagine the ability to put imminent death on hold is adequate motivation for saving the world. With nothing left to lose, I suppose any of us could step up to the plate.

There’s plenty of social commentary sprinkled within The Mighty Thor‘s pages, but Aaron’s clever dialogue and quick pace ensures the book doesn’t get bogged down in premise. War forces the light elves deep inside dwarven caves, into an endless refugee camp. Dwarves turn a blind eye, as they promised to protect the refugees of Alfheim, not feed them. If you squint hard enough, you just might recognize this chapter from current Midgardian crises. And who could ignore Roxxon, the Big Corporate Bad of the Marvel Universe making another run for global control? Controlling the news, the satellites and a trans-realm oil pipeline? Pretty topical, that.

If social snark, gender equality and banter that will keep you in stitches somehow aren’t enough to entice you to dive right in, just go out and pick up a book and crack it open. Gaze upon the otherworldly palette of Russell Dauterman’s artwork that, if you have a soul, will blow your fucking head off. (Sidenote – Dauterman isn’t the only artist in this series. The others more or less do it justice in their own ways. But seriously, just look at Dauterman’s work.)

As we inch closer to the ending of Foster’s run, which is set to conclude on March 21 in The Mighty Thor #705, it seems we also approach the termination of her battle with cancer. Mjolnir has given Jane’s life a purpose far beyond her already noble position as a healer, but back on Earth, her number’s about to be up.

(Allegedly. We all know how these things play out in comic-land. Marvel wants us to ready ourselves for the end – “Prepare yourself as Jane Foster picks up Mjolnir one last time.” Forgive us for taking your promotional text with a grain of salt, but I feel like we’ve been here before.) 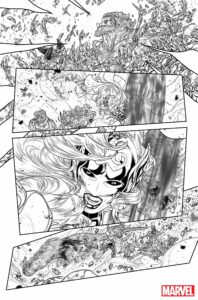 Masks may come off; Jane’s mortal form may whither. Who will step up to the hammer? It’s all up to Mjolnir now, and theorizing usually gets us nowhere. Did Jane’s run as Thor set the stage for other Midgardian mortals? Could the cunning S.H.I.E.L.D. Agent Roz Solomon be in the running? This series depicted her as a clear cut above the other agents of S.H.I.E.L.D. Then again, Mjolnir has made multiple Thors (even turning itself into a Jane Foster doppelganger at one point), and with the series cramming in as many familiar characters as possible towards the end, anything could happen.


Jane, if this truly is the end, we will miss your brass tacks approach to godhood and your unwillingness to suffer fools.
Superheroes The Mighty Thor