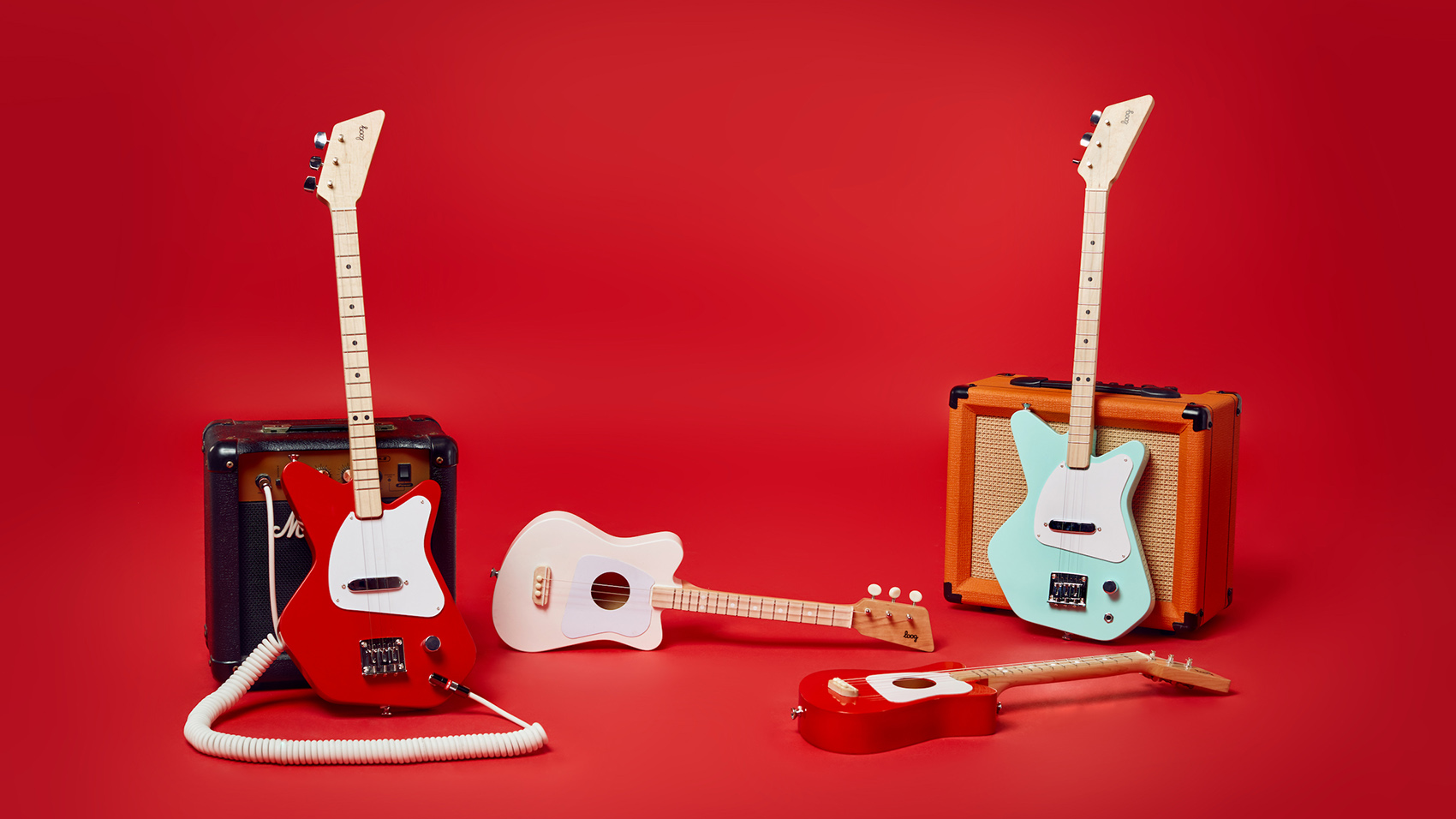 Learning to play a guitar as a kid would’ve probably been a lot more fun if it hadn’t required tirelessly stretching and blistering tiny kid fingers across a seemingly endless fretboard, just so your baby boomer instructor could teach you how to play “Smoke on the Water” (perhaps one of the cruelest societal norms the generation has inflicted upon us).

That’s where Rafael Atijas comes in. The entrepreneur and self-described amateur guitarist founded Loog Guitars in 2011 with the goal of making musical education easier and more fun for kids. Loog offers two models: the acoustic Loog Mini and the Loog Pro Electric (the latter boasts a lucite model that costs a cool $300. Chic!). Don’t let the price tag fool you into thinking this is just some trendy accessory for cool parents to keep around the house—Atijas designed Loog guitars to function almost exactly the same as regular guitars, only smaller… and they’ve found fans in both twerps and grown-ups alike.

We riffed with Atijas (sorry) about why kids’ guitars have generally sucked, the importance of childhood creative education, and how Jeff Tweedy became an avid Loogite.

RIOT FEST: What drove you to create Loog? What were your goals for the company and the product, and have they evolved?

Rafael Atijas: I was doing my masters at NYU and needed to come up with a business plan for my thesis. At the same time, my sister gave her daughter a toy guitar. That’s when I realized that toy guitars were kind of crappy and that there should be a good instrument designed to make it fun, easy, and stimulating for kids to learn to play. So, that’s how i ended up with the concept for a small, well-designed three-string guitar.

Functionally, what’s the difference between a Loog guitar and a standard kids’ guitar?

[A Loog] has three strings instead of six. Therefore, it’s easier to play; there are less things to learn and to remember. Also, fewer strings allows for a slimmer neck, so it’s easier to hold and play. Plus, three strings is the minimum necessary to still be able to play three notes at the same time, and therefore you’re able to play chords… and songs. Any song. So, in terms of design, it’s a guitar that allows kids to play songs in their simplest form. Apart from that, our guitars come with flashcards and an app with lessons.

What songs are being taught on the app?

Nice. Was it a conscious choice to not include “Smoke on the Water?”

Besides the opportunity to become a dope guitarist at a younger age, what are the benefits of learning how to play an instrument as a kid?

Great question. Learning to play an instrument brings benefits at almost every level, cognitive and socially. Kids who learn how to play an instrument are better in maths, languages, and listening. They’re better at focusing, interacting with peers, have a deeper love for learning, and are more likely to stay in school.

Loog’s instruments tend to run a bit more expensive than the standard kids’ guitar, so I’m curious about your thoughts on accessibility for children’s creative education. Obviously, you want to make Loogs more physically and mentally accessible, but what about economically?

The thing is, those cheap instruments are also cheaply made, and that means they’re impossible to tune and make a decent sound; then kids simply don’t feel like playing. Sure, they may cost just forty bucks, but if they are going to end up lying in a corner untouched, then it’s not that great of a value.

Our guitars are designed to be played and played. Kids feel rewarded right from the start because they’re able to play songs from day one, and that encourages them to keep on playing and learning. So even though they might be a bit more expensive, it’s a better value. Not to mention the fact that they come with an app, so it’s not just the guitar they’re getting, but also everything they need to start playing songs. At $79, [the Loog Mini is] a pretty sweet deal, actually.

With the app, it seems like customers get an in-home instructor of sorts, which I’m sure most kids would be more into than actually taking after-school guitar lessons somewhere… but Loog also has a program for schools and educators, right?

We do, yes. We are very fortunate to have many educators who love teaching with their Loog (and love being able to teach younger students with their Loog), so we are building a community to make it easy to find local teachers. While still a work in progress, it has us very excited.

That’s so awesome. I saw on the company’s website that adults who already play guitar are encouraged to use a Loog as well—what can a Loog add to an established guitarist’s arsenal?

That’s something that took us a bit by surprise. From the very beginning, a percentage of our customers are actually grownups who already play guitar. They like the constraint of having fewer strings; it makes them discover new ways of playing guitar, and triggers creativity. People like Jack White and Keith Richards play with alternate tunings and fewer strings, and our Loog Pro line is quite perfect for that. Jeff Tweedy of Wilco has something like four or five Loog guitars.

Oh wow, that’s sick! You’re a guitarist yourself, right? How do you use a Loog?

Yup! I love playing mine in open A tuning. That allows me to play open chords, and different things than when I play with my Fender Telecaster. These days at home I just play songs I like, the Stones and such, as a way to relax. I actually try to disconnect from work when I play.