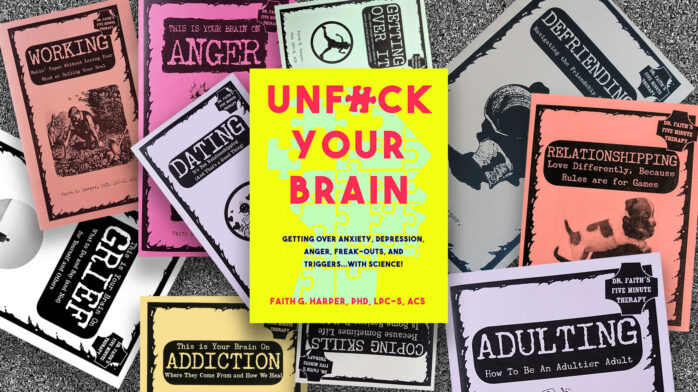 Is crying in class punk rock? Mental health crises are integral to punk, from the Ramones wanting to be sedated to depression taking hold of Black Flag. Still, addressing one’s own mental health issues isn’t necessarily considered cool, and being open about your feelings in a way that doesn’t involve launching your fist through a mirror is generally considered not rad. So what is a sad, nervous punk to do?

Enter, Dr. Faith G. Harper. The San Antonio, Texas-based therapist, sexologist, and nutritionist is on a mission to make mental health care more approachable and accessible, and with her recent book Unfuck Your Brain and her numerous zines for Microcosm Publishing, she’s doing a pretty damn good job at it. Dr. Faith is a true renaissance woman—in addition to working as a trauma-informed therapist (more on that soon), she’s given a TED Talk about sexual shame and silence, written a cookbook for the radically-inclined, and is the clinical director at San Antonio’s Grace Tree Foundation, which provides trauma sensitive yoga classes. While it’s not very punk to do what people tell you to do, dad, if there’s anyone whose advice you can trust, it’s Dr. Faith.

We talked to Dr. Faith about cognitive behavior therapy, post-election trauma, and how asking for help—and helping yourself—can actually be totally punk.

RIOT FEST: Good morning, Dr. Faith! Jumping right in, you describe yourself as a “trauma-informed” therapist. What drew you specifically to trauma?

Dr. Faith G. Harper: I’ve always worked in mental health, and the common theme I saw in most people I was working with was unresolved trauma. Everything else I’ve studied relates back to trauma, even if they seem disparate on paper. People will come to therapy when they have sexual intimacy problems, when they wouldn’t come for PTSD in general. It’s one of the places where it bleeds out first. I also saw so many people with complicated medical problems that I was sure were strongly correlated with the emotional health problems. Turns out, when I studied it, there absolutely was , and I could better support trauma recovery by looking at the mind-body connection… and how we nourish it.

Can you define trauma in the context of your practice, and what it means to be trauma-informed?

A trauma is simply anything that overwhelms our ability to cope. Shit happens all the time. Some of it’s expected, and some of it is utter craziness that comes out from left field, ties our shoelaces together, then pushes our faces in the shit when we trip.

If we have time to heal, make sense of our story, and create mechanisms for empowering ourselves again, then we don’t continue to live in that trauma… but that doesn’t always happen. The less power you have in the world to begin with, the less likely you are to have what you need for recovery. This is why the PTSD rate is so high in the foster care system, for example.

Being trauma-informed means looking at behavior and coping skills as adaptation to trauma—survival instincts that no longer serve a greater good. So when you’re trying to make sense of current behavior, you’re looking for the why.

Sure! CBT is generally the gold standard of therapy intervention; but I saw it being used in very basic ways rather than being informed with how the past still crept into the present, and there was a huge need for a shift.

Part of trauma recovery means being back in your body. The big missing component from talk therapy is how we store unresolved trauma in the nervous system.

We not only have the vagal nerve [which controls unconscious bodily functions like heart rate and sweating] activated by trauma, we also hold these messages and activate theses messages in our fascia throughout the body. Discharging past trauma has this somatic (bodily) component, and recovery tends to work faster when we incorporate that work. So even with CBT, connecting in bodily sensations along with thoughts, feelings, and behaviors helps bring us back to the body.

The physical effects of mental trauma are so fascinating. I feel like most people understand that depression, anxiety, etc. can produce physical stress, but never really think of remedying that by actually exercising their bodies…  even though that feels really obvious?

Has your work as a trauma-informed therapist changed now that, in a post-Weinstein world, trauma is basically unavoidable in the news?

The 2016 elections were far better for business than anyone would ever want them to be. I have clients who’ve started therapy just to cope with the current political climate. They felt powerless and helpless and hated that feeling.

Local politicians have been blowing the neocon dog whistle with bills like SB6 [Texas’s anti-trans “bathroom bill”] last summer, which has been terrifying for many of my clients, friends, and family. Being politically active has, in some ways, been a better therapy intervention tool than anything I’ve done in the office with clients. A trans kid seeing me on the news at a town hall, opposing a bathroom bill does more for them feeling safe in the world than anything I can say with words alone.

Speaking of this nightmare political climate: With quality healthcare feeling increasingly inaccessible, how can people navigate their own mental health issues if they’re unable to afford professional help?

The peer recovery network is strong in Texas, and in many other places. The support of people with lived experience is invaluable, even if you can afford a great therapy team. I was working on a SAMHSA [Substance Abuse and Mental Health Service Administration] grant for three years strengthening that statewide network until Trump cut funding.

That’s also why I write the books and article that I write. No one was writing what I wanted to read and what I wanted to share when I was working or volunteering in a mental health role. Even just knowing, “Hey, you are not crazy. You are a badass survivor. You are coping with a real, physiological response to the shit that has happened to you,” can be very empowering.

Additionally, development of coping skills and self-care are a huge part of all recovery; no therapist can hand that to you on a platter anyway. So offering those tools to work with can also be a huge jumpstart for people, whether they are working with someone or not.

What’s the best way to practice self-care without crossing the line into self-enabling—such as allowing yourself a cheat day on your healthy diet every day, or continually blowing off stressful work to do a sheet mask and smoke a joint? How can you be gentle with yourself while still maintaining a sense of discipline?

It’s not letting yourself off the hook… because you know that isn’t good for you in the long run. It’s, “What do I actually need right now?” versus medicating away these feelings. I don’t need shoes, I need to meditate for five interrupted minutes and get myself back online. What if I fuck up and buy the shoes instead? OK, you aren’t perfect. You messed up… but what did you learn from that? What are you going to do differently next time?

We need a huge box of effective coping skills we can work from (ironically, that is literally the book I am working on right now, open in another window on my laptop) so we have multiple options for when the shit hits the fan. And we have to practice before the shit hits the fan so we are more likely to use what’s good for us when we are activated and not thinking as well. An activated brain can’t be controlled, it can only be negotiated with.

Asking for help when you’re having mental health issues is good and, more often than not, necessary. But how do you do that without becoming too reliant on your friends and family to pick you up when you’re down?

Well, first of all, we are hardwired to connect. But like you said, we can’t burn out those around us.

Sometimes reaching out to others isn’t a matter of having them baby us or rescue us, but just a simple, “Hey, I’m needing to clean up the kitchen. Can I chat with you on the phone while I do it? Can we just talk about the reboot of the Queer Eye series while I tackle these dishes?”

I work with a lot of men who are soldiers, veterans, cops, firemen, doctors, etc. They are seemingly only allowed emotional vulnerability in my office, and that lack of connection is slowly driving them crazy in a world that tells them to be above it all.

I get so mad when people infer that men don’t wanna come see me, and that they don’t talk when they are forced to. It’s the exact opposite. My straight cis male clients are so open, vulnerable, and hard working because they are allowed to be. It’s a different kind of courage than deployment to Iraq, and it’s not one we prepare men to undertake. We’re fucking over men, too. Not just women.

Shifting gears a bit, your book Unfuck Your Brain is listed on Amazon as a “punk” book, and you’re considered by many to be a punk therapist. Do you agree with this label? Has punk, as both a music genre and cultural movement, explicitly influenced your practice?

I love that so fucking much. I am apparently the number one best seller in punk music right now!

What makes punk brilliant is the acceptance of authenticity. I may not be punk in the way others think of punk… Let’s face it, I’m lame as fuck. I got pregnant at 21 right after undergrad. I’ve been bopping around, raising my kids, working, studying, and being as unhip as one can be. I figured out by age eight that I was never gonna be cool. Punk means I get to be all those things, and it’s totally fine because it’s authentic.

My clients find it hilarious when reviews of my book say I use language to try to sound hip and cool and younger than I am. Anyone who knows me knows that I’m a military brat with decades of community mental health experience. I talk how I talk, and I write in that same voice. I have no delusions of cool. The punk scene recognizes that, I think, which is why that connection has been made.

Punk is empowering and about finding mechanisms for survival which may buck the norms. That’s what my writing is about. So it makes total sense to me… Though I never would have seen it coming if you asked me a year ago.

My husband is a musician and will tell you I have horrible taste in music. So when my publisher told me that the band members of Against Me! were fans of my writing, he was floored and I was all “Who?” So I bought their most recent record, and read about them, and holy shit, Laura Jane Grace is a badass! I loved the music and I love how she has added her personal experiences to it for political change. I can’t see that happening and being accepted in other genres. So now that I’ve caught up, I totally Twitter-stalk her.