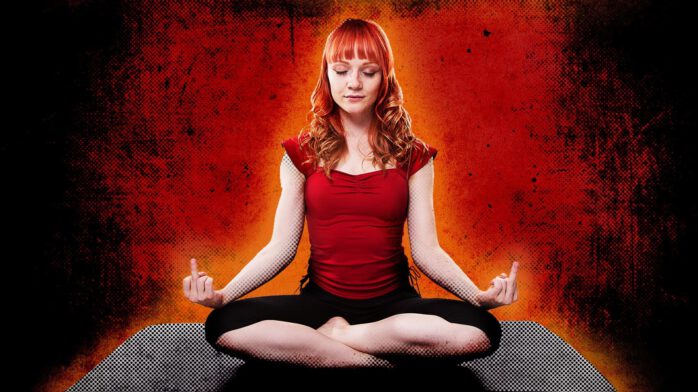 Kali is a Headbanger: 3 Essential Principles of Heavy Metal Yoga

The once-unthinkable mash-up of what acclaimed photographer Michael O’Neill dubbed “the architecture of peace” and the music most closely associated with the pinnacle of bedlam is now a legit phenomenon: Heavy metal yoga classes are cropping up left, right, and lotus.

So what’s it like hitting the road to Nirvāṇa blasting a soundtrack better suited to Naraka? Riot Fest surveyed a trio of groundbreakers in the realm to find out.

“Yoga is huge right now, and gimmick-y yoga stands out in a crowded and largely homogeneous market,” Nelson admits. “That said, the philosophy of yoga and Buddhism is very compatible with what I’ve heard in hardcore and metal for a long time and there are plenty of bands who have brought it together, too — Neurosis, Judge, various Krishnacore bands of the 90s and early-2000s.

“Basically, what we’re all saying is that life is pain, but that we can choose to grow from places of brokenness and find connection. Life is darkness, but that darkness makes the light that much more brilliant and precious. And, ultimately, we are all broken in our own ways but we’re all enough. Most yoga teachers emphasize the light over all else and it rings false to those of us who have suffered through human experience.”

This last line is only all too true for Nelson. “I grew up as one of the only Jewish kids in small town Rhode Island,” she says. “On top of that I was coping with understanding my queer sexuality.” Punk and hardcore provide “a lifeline for me into a world where I wasn’t such a weirdo or so alone.” A true believer, she booked shows, did a college radio show, and worked at a record store as she pursued both ever-heavier riffs and ever-more prestigious degrees.

In the wake of departing a PhD program she’d once coveted and feeling lost, Nelson heard the yoga teacher Seane Corn on NPR and subsequently enrolled in an eight-week introductory yoga class at a local community art center. “Over the next four or five years my interest in yoga was consistent but I wasn’t a yoga person, she says. “I would go to a class or two a week. I went back to grad school to study public health and social work, and would listen to Earth and Isis and Converge and Boris while reading and writing papers nonstop about super depressing shit. I was so happy.

“And then things get heavy.”

After graduation, Nelson relocated to San Francisco. Six weeks later she was raped by an acquaintance she’d met through the scene.

“I was deeply ashamed and depressed and self-destructive and was diagnosed with PTSD a few months later,” she says. “But thankfully I was raped in San Francisco, and it’s easy to access mental health services through a really robust system of care in the city. My therapist suggested that I check out one of the donation-based studios in the city and I started going multiple times a week. It didn’t cure me, but it did help me feel some release and I was less numb all the time.”

The Black Metal Yogi had come out of pre-existence devoted to inclusivity and ahimsa on the mat with a playlist on which Himsa would not be out of place.

“As far as yoga goes, I want to emphasize it’s not about the physical poses and it has nothing to do with how it looks. It’s the intention behind the action. You’ll probably look silly most of the time and that’s okay. Nobody else cares what you look like… [A] lot of people say, “I’m not flexible. I don’t have the right clothes.” Whatever. You don’t need to have a certain kind of body for yoga. That’s capitalist bullshit. Yoga is about unlearning everything you’ve ever been told. It’s about retraining your brain and body. It’s about putting yourself into uncomfortable positions and surviving it and being more resilient as a result. It’s about building community and seeing our shared humanity no matter where we start from.

“It’s the punkest shit that exists.”

Of Funereal Doom, Dharma, and Self-Determination

“The metal attitude implies a bit more hardcore philosophy,” she adds, “and we know that we won’t have to listen to any preaching about love and white light.”

A lover of music stretching back to a young childhood spent playing piano, violin, and cello, Devi discovered punk rock in high school and quickly gravitated toward more extreme pastures where the likes of Candlemass, Morbid Angel, Emperor, and Darkthrone grazed. It wasn’t until her early thirties that — at a close friend’s behest — she considered crossing the yoga and metal streams.

“I kind of laughed off her idea for a while as I take my personal Ashtanga practice pretty seriously and was never one for gimmicks in yoga,” Devi says. “But eventually I had enough freaky people express interest in such a class that I decided to do it for fun.”

And yet the synergy between Ashtanga, doom riffs, and other dark ambient music — nothing “hectic or thrash-y” she promises — proved undeniable.

“To people on the fence, I’d encourage them to try it, as a regular practice is sure to increase physical health and peace of mind,” she says. “However, I’m not here to waste time trying to convince people. Ultimately, to establish a practice a person has to have their own motivation and discipline. Hopefully people in the metal community embrace the value of striving to improve themselves and determining their own fate.”

Don’t Believe the (Meditative) Hype: Rage is All the Zen

Rage Yoga founder Lindsay Istace credits her practice with helping her to not only “overcome addition and weather a lot of personal obstacles,” but also to re-channel her natural energy in a more positive way, transforming “kitchen sponge”-esque muscle mass into a “strong mind-body connection” that elevated her to a place where she could truly be “centered, confident and giving zero fucks.”

“I think a lot of people connect with Rage Yoga because they need a safe place to release negativity in a positive way,” Istace says. “These are people who want the benefits of a yoga practice but are turned off by the serious and perfectly serene vibe of most conventional studios. That vibe works well for some people. Others need something different and they often have a hell of a hard time finding it.”

Or they did, anyway: The classes led by Istace herself to an aggressive music-friendly soundtrack proved so popular—enough to attract attention from mainstream outlets ranging from from Yoga Journal to Live with Kelly & Michael—she added a 200 hour Rage Yoga trainer certification course (“Become a certified badass!”) and online classes for those not in the Calgary area. A full blown rage retreat is on the horizon.

“When I first started out with Rage Yoga I was building something that I was looking for in the yoga world,” she explains. “It was something that felt authentic and powerful to me, but I worried I was alone. I thought perhaps there really was only one strict method of practicing and I was fucking it up. When I saw how many people connected with my ideas it reaffirmed for me that a practice means something different to everyone. I think the personal nature of yoga is beautiful!”

While Istace is on a mission to offer devotees a roadmap to releasing “pent up bullshit in a constructive way while connecting you to your inner badass, helping you become Zen as fuck both on and off the mat,” she sought to ensure the “meditation and mindfulness” aspects were not lost in the primal roars—whether emitted from students, speakers, or Isctace herself.

“I made sure that Rage Yoga made these sides of yoga available without making them mandatory,” she says. “The choice is left to the students! I think this approach makes personal and spiritual betterment less intimidating. Students can grow into it over time and at their own pace.”

Shawn is a Miami-based writer, editor, and noted pug wrangler holding bylines in Decibel, Fangoria, Rue Morgue, Maxim, the Wall Street Journal, Magnet, and Stereogum, among other fine and middling publications. Longterm he aspires to write time travel Christmas movies for the Lifetime and Hallmark television channels and raise his two children to appreciate every era of Darkthrone.