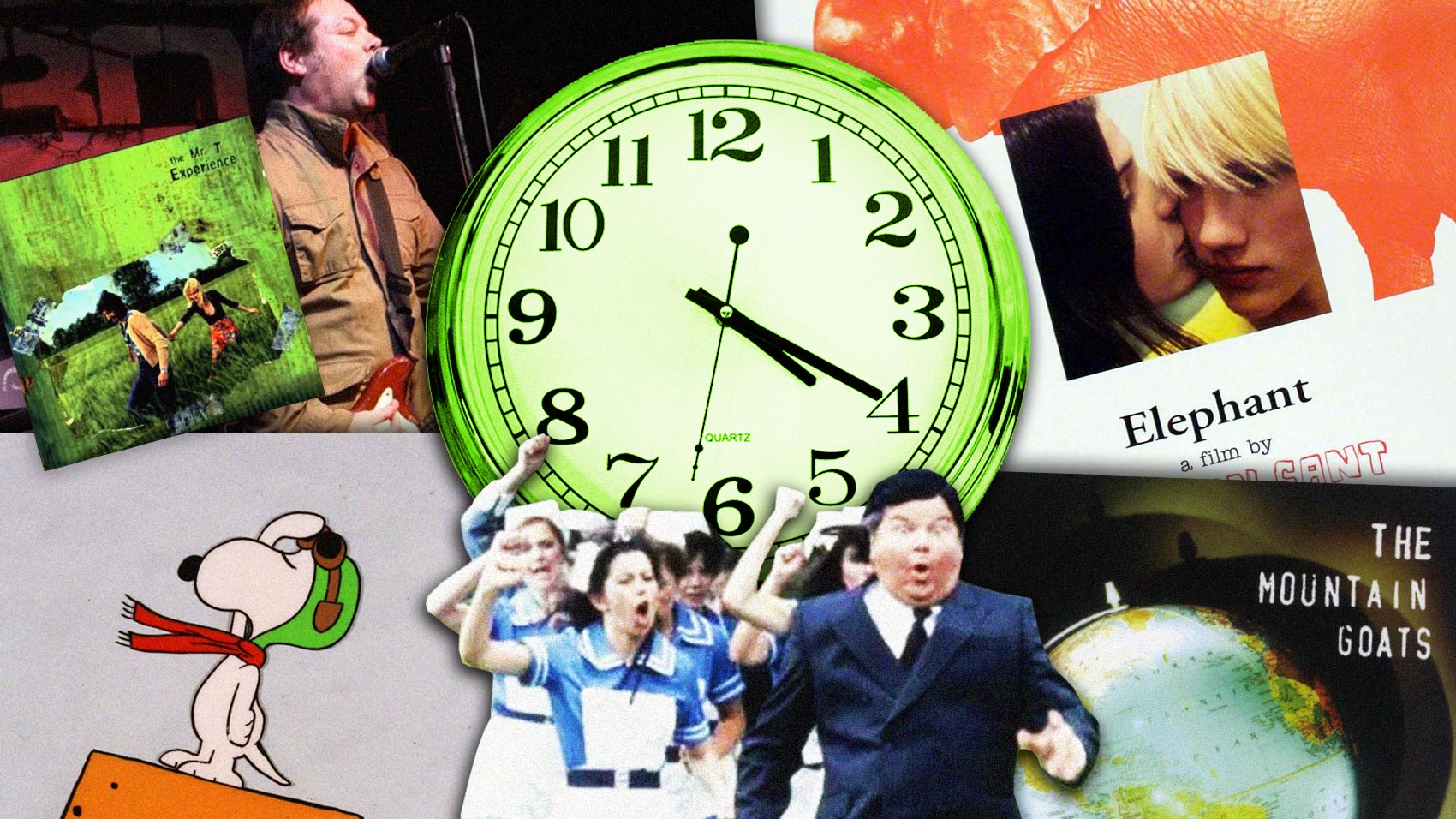 They say it’s always 4:20 somewhere, but they must’ve been stoned to the bone when they came up with that one, because no it isn’t. The good news is that regardless of your state of mind, it is April 20—and, at some point in your respective time zone, it will be 4:20 not once, but twice. The not so good news is 4/20 the date was infamous well before five teenagers (and eventually High Times’ editor Steven Hager) popularized 4:20 p.m. as the globally agreed-upon time to blaze up.

Most infamously, today would’ve been Adolf Hitler’s 129th birthday (had the Führer focused all that energy on building up good karma, rather than being reviled and despised as the worst guy ever). Second-most infamously, it’s the 19th anniversary of the Columbine massacre. Granted, an infinite amount of interesting historical and cultural events occurred on every single day of the calendar, but “420, bro!” vs. “Hitler and Columbine, ugh!” is a pretty crazy dichotomy.

So, in the interest of killing—and then hopefully resuscitating—your buzz, let’s pay homage to five pieces of pop culture surrounding everything else extraordinary about 4/20 (the date, not the time—you’re still with us, right?)

Even Hitler Had a Girlfriend
The Mr. T Experience (1993)

The seventh track on Our Bodies Our Selves, the beloved veteran Bay Area pop-punk trio’s fifth album, has the kind of title that demands skipping ahead—you can’t help but think, “The fuck are they going with this?” Despite its uncharacteristic (at the time) solo acoustic strumming, the genius lyrics for “Even Hitler Had a Girlfriend” are a textbook showcase of frontman Dr. Frank (Portman)’s gifts for going tongue-and-heart-in-cheek.

The first verse consists of Portman plainly lamenting his failings in love, culminating with a wonderful groaner of a pun (“The odds are pretty good / But the goods are pretty odd / Though at this point I’d take anything you’ve got”). While the chorus captures an inspired blend of naked, embittered desperation and hyperbolic absurdity (“Even Hitler had a girlfriend / Who he could always call / Who’d always be there for him in spite of all his faults”), I’m personally partial to the third verse’s “Nixon had his puppy / Charles Manson had his clan / But God forbid that I get a girlfriend.”

If only our annoying friends were able to laugh off their romantic derps this easily and memorably. *

Debuting just four years after Eric Harris and Dylan Klebold killed 12 of their classmates and one teacher at Columbine High School, there was briefly a tut-tutting “too soon!” vibe from both critics and audiences about the second film in Gus Van Sant’s ambitious, experimental Death Trilogy (thank God he waited 11 years after Kurt Cobain passed before dropping Last Days).

The already minimal controversy quickly flamed out when the masses realized, “Oh, this isn’t exploitative. It’s just an art film.” Challenging as Elephant may be, it’s a mesmerizing portrait of a few days in the lives of two young men (loosely based on Harris and Klebold) who dispassionately open fire on their high school one beautiful afternoon.

One would think the multiple, first-person p.o.v. tracking shots would sensationalize the proceedings, but Van Sant’s technique has quite the opposite effect, imbuing the film with creeping dread and almost clinical anticlimax.

As usual, Roger Ebert put it better than almost anyone: “Van Sant has made an anti-violence film by draining violence of energy, purpose, glamor, reward, and social context. It just happens.”

Yakety Sax
(Used with anything other than) The Benny Hill Show

Boots Randolph neither died nor was born on April 20, but British comedian Benny Hill did pass away 36 years ago today, so this is an opportunity to commemorate Randolph’s iconic-yet-ridiculous instrumental, “Yakety Sax.” The closing theme for The Benny Hill Show famously accompanied sped-up shots of the host and various pervy pals chasing around—and sometimes being chased by—buxom women in various states of undress.

To put it mildly, that kind of thing doesn’t exactly play under today’s cultural lens. Do you think it plays in the four clips below? Me too! But if you fail to see the humor in an upbeat saxophone augmenting (in order) a) yet another Riot Fest recap video, b) flesh being stripped from Jesus’ body, c) preadolescent girls projectile-vomiting on priests, or d) a youth soccer gone violently awry, you may just want to skip to the next blurb now.

As for the rest of you sickos, give that fourth clip a couple seconds… I promise you’ll be rewarded.

Riot Fest is based in Chicago, so might as well throw ourselves a bone. Before it was renamed Wrigley Field in 1927, the Cubs’ iconic stadium went by Cubs Park from 1920 to 1926, and Weeghman Park upon its founding in 1914. The Cubbies’ first home game in the Friendly Confines? April 20, 1916! Now, everybody knows the lovable losers broke the Curse of the Billy Goat (just kidding—curses don’t exist, only incompetence) in 2016, winning their first World Series in 108 years.

Lifelong Cubs fan John Darnielle released this spirited lo-fi anthem way back in 1995, on the Mountain Goats’ Nine Black Poppies EP. It’s not all about the Cubs (the tune features a prescient line about the then-similarly tortured Tampa Bay Buccaneers—who did “make it all the way through January” just eight years later), but stands the test of time as a paean to blind optimism for overdue good things… be it people starting to read Chaucer again or signs of lunar life.

See, it’s okay to feel good about stuff from time to time. In fact, you probably need to after those “Yakety Sax” videos. 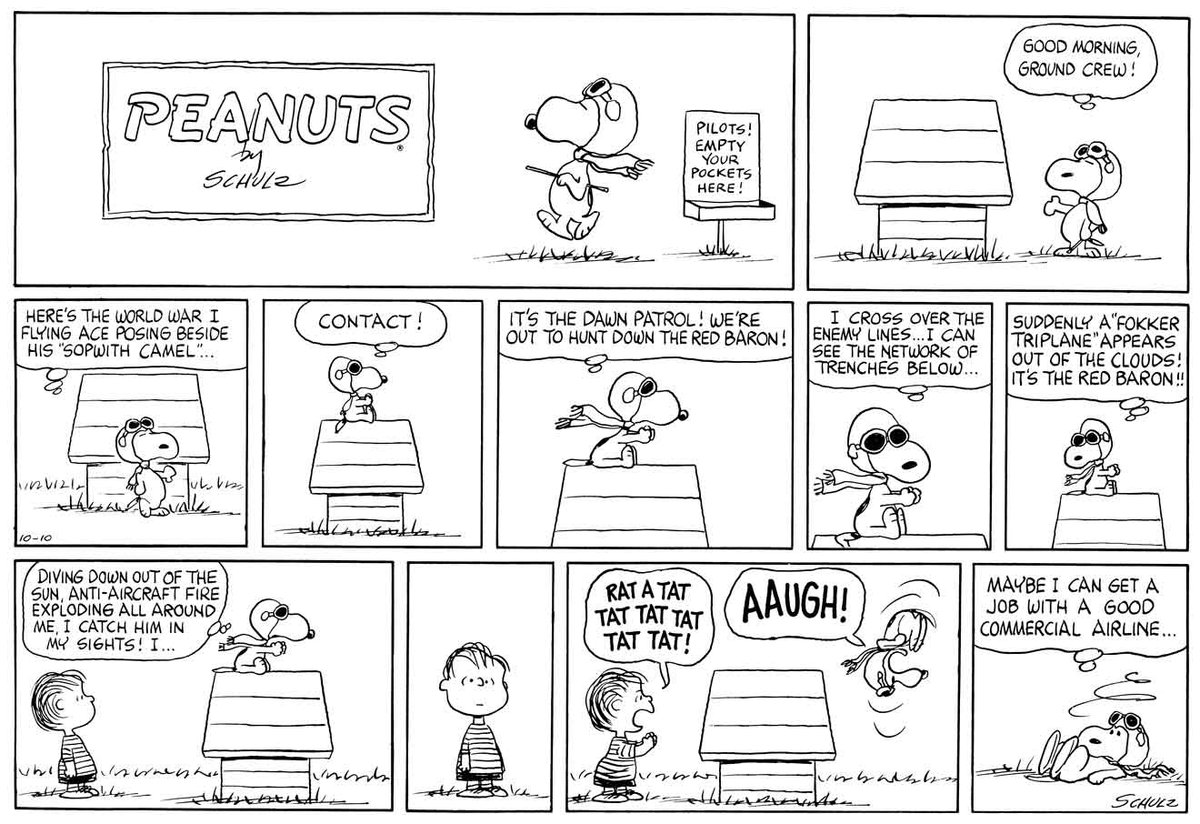 I don’t know what recurring plot thread in Peanuts was more awesomely weird: Linus’ unwavering belief in a demigod who descends upon a local pumpkin patch every Halloween to bestow toys to true believers, or an anthropomorphic beagle who routinely dons goggles, ascends to the top of his doghouse, and engages in imaginary dogfights with infamous World War I pilots.

Manfred von Richthofen, a.k.a. the Red Baron, was finally taken down by a Royal Air Force pilot 100 years ago tomorrow, but claimed his 79th and 80th (i.e., his final) victims today.

That notoriety clearly marinated in Charles Schulz’ imagination until it manifested in the form of Snoopy visualizing his backyard abode as a Sopwith Camel (the plane that maybe/maybe not took down Richthofen), which was more often than not perforated with bullet holes in a noble losing effort.

I’m not telling you anything you don’t already know, and no disrespect to the many surely talented writer/illustrators keeping it real today, but holy shit the comics page used to be cool.

* Those who need a full-band version in order to truly feel “Even Hitler Had a Girlfriend” should check out this Dr. Frank and the Bye Bye Blackbirds 7-inch.

Those who’d prefer a live version can see the Mr. T Experience play with the Smoking Popes, Kepi Ghoulie, and Telethon at Chicago’s Bottom Lounge on May 12; tickets for that night only are sold-out, however a few two-day passes for both Smoking Popes shows are still available right here.