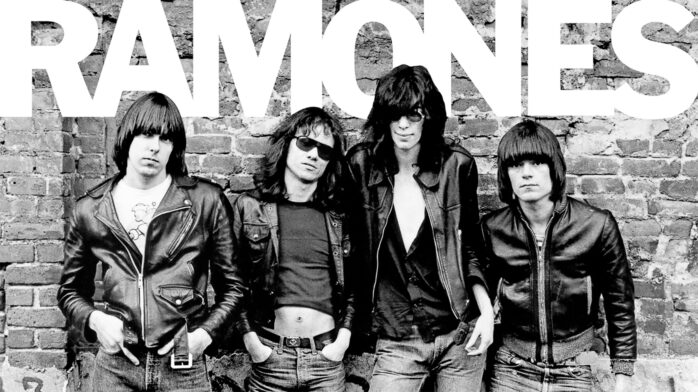 Let’s all wish the Ramones’ debut album a happy birthday

While the band (arguably) may not have written the first punk song ever, it’s undeniable that 44 years ago this week (April 23, 1976) the genre would be pioneered by the Ramones’ debut release, Ramones. Thanks to Sire Records, the world beyond New York City would soon be introduced to Joey, Johnny, Dee Dee and Tommy.

Ramones was an oddly collaborative effort. Lisa Robins of Hit Parader caught an early Ramones gig in the city and got soon-to-be manager Danny Fields in touch with the band. Eventual co-engineer, backing vocalist of Ramones, and early Sire employee Craig Leon would see the band for the first time playing for “a handful” of people at CBGBs in August of 1974. Craig would eventually invite the band up to Sire to meet Seymour Stein, who went on to sign the Ramones in 1975 (after his late ex-wife Linda had fallen in love with them first). The guys began recording Ramones in January, 1976.

There were a few hiccups, such as Stein’s strong aversion to songs involving Nazis, glue sniffing, and beating children; but eventually—with genius engineering coupled with backing vocals from Leon, Joey’s brother Mickey Leigh, and the recording engineer (along with some very creative mixing)—the band’s first affront on the unsuspecting public was in the can.

Two singles were released, “Blitzkrieg Bop” and “I Wanna Be Your Boyfriend;” and while the album did not chart well, it was (and still is) loved by critics. By the time the Ramones played the U.K. later that same year, the crowd sang along with every word (when they weren’t lobbing spitballs). Mick Jones and Joe Strummer of the Clash would introduce themselves as fans; and the Ramones had arrived.

“Ramones had a tremendous impact on people who wanted to express their thoughts with that type of freedom and honesty, but feared it would be unacceptable,” according to Leigh, co-author of I Slept with Joey Ramone: A Punk Rock Family Memoir. “Upon hearing this album, [these people] discovered they weren’t alone. By translating raw emotion into unconventional lyrics using the direct minimalism of words shouted—as they would be in real life—the Ramones began to fill a cultural void.”

That void-filling continues to this day, and likely will continue to do so for generations to come.