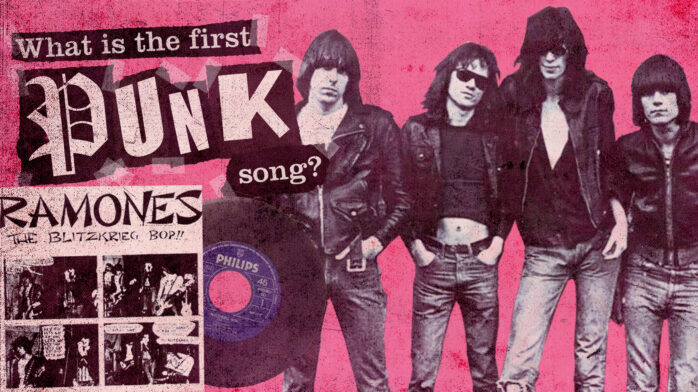 Is “Blitzkrieg Bop” the first punk song ever?

Oh man, is this series is gonna piss you off. Which is by design, to a small extent, but nevertheless a good thing. Arguing is fun! There aren’t enough arguments on the internet! Crunch all you want, we’ll make more.

Our first three installments have thoughtfully and credibly outlined why the Johnny Burnette Trio’s “The Train Kept A-Rollin’” or the Ronettes’ “Be My Baby” or “Strange Things Happening Everyday” by Sister Rosetta Tharpe are the First Punk Song Ever (a distinction that absolutely warrants the caps). While I’d be happy to reinforce the excellent points made by any of my fellow scribes, my job today is to represent the arms-folded masses who are surely muttering, “One of those is rockabilly, the other is girl-group Wall of Sound, one is gospel… and none of them are fucking punk!” To be fair, our little experiment could use a breakaway slam dunk before some enterprising historian chimes in tomorrow to extol Frisky Freddie and the Howlin’ Hellhounds’ Depression-era honky-tonk because the fiddler rocked multiple safety pins to keep his britches cinched. So, let’s make a quick wham-bam-thank-you-ma’am case for the Ramones’ “Blitzkrieg Bop.”

The opening track and first single off the Queens legends’ 1976 self-titled debut (the 7-inch was released two months before the album) is the song that galvanized what is widely considered the punk rock archetype: three bar chords crudely ripped out at a breakneck BPM by people who don’t look like they belong in polite society.

Now, clearly “widely considered” is code for “mainstream,” and why should anybody give a flying fuck about the mainstream definition of punk? We’re hovering on the lip of a black hole here, because what the hell is the mainstream—or the underground, for that matter—anymore anyway? “Blitzkrieg Bop” is such a fixture in global pop culture that it’s shorthand for whatever the powers that be want it to be shorthand for: spunky millennial impetuousness, rebelling against the tyranny of unsuitable fast food breakfast menus, even the adrenaline rush of, um, a breakaway slam dunk.

However, with the exception of, like, Calvin & Hobbes, greatness gets mangled in the gears of corporate appropriation all the time, so there’s no need to whine about it—the band themselves happily sold “Blitzkrieg Bop” to Bud Light way back in 1991, and the resultant exposure was predictably enormous.

While the song has ascended to a level of obnoxious ubiquity, in its infancy, it was relatable only to a small band of weirdo outsiders in the know, and for good reason. It’s about working yourself into a frenzy waiting in line for your favorite band. Sure, 1976 was the year people worked themselves into a frenzy for fucking Peter Frampton, but that’s obviously not what Tommy Ramone (who wrote the vast majority of it) was going for.

From the title down, every line can also be read as Hitler’s infantry working themselves into a killing frenzy (“they’re forming in a straight line,” “shoot ’em in the back now”), although Tommy went out of his way to debunk that theory. Whether you believe him or not, the song works on multiple levels… a hallmark of many of the greats.

That’s all great, but we’re talking about firsts here, and in “Blitzkrieg Bop,” a combination of factors that had never been formulaic: A look, an attitude, an unpretentiousness, a ganglike mentality coalesced into a formula that did nothing less than inspire generations.