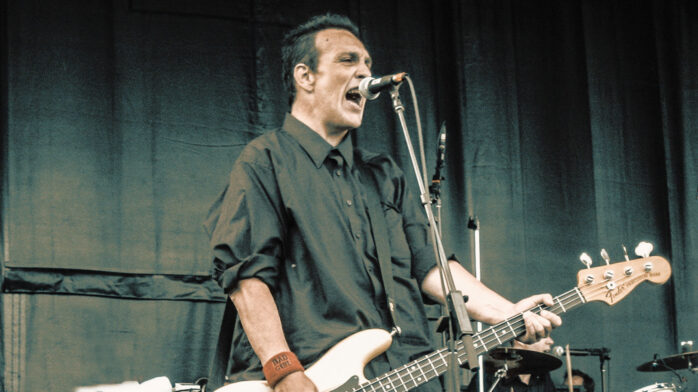 Since this morning, the entire Riot Fest staff has been shaken at the news of Steve Soto’s sudden escape from this Planet Fuck we call Earth. Best known for forming SoCal hardcore punk pioneers the Adolescents—until today, Soto was the band’s only original member—the bassist, vocalist, and songwriter also started Agent Orange, and ripped it up with 22 Jacks, C.J. Ramone, Greg Hetson’s Original Punk Rock Karaoke, and Manic Hispanic, to name more than a few.

Any punk fan who took even the most casual stroll through social mediaville this afternoon had their heart melt from the enormous outpouring of love, respect, shock, and terrible sadness sent in Soto’s direction. And while the Soto never had the chance to play Riot Fest with the Adolescents as planned, Steve Soto most certainly lived a life, made the rounds, and left an indelible impression on seemingly anybody who crossed his path.

The Adolescents declare their hatred for children on the lead track of their 1981 self-titled debut record (you’ve most likely seen its iconic cover; it’s the original Blue Album, and was one of the most widely-distributed hardcore records of its time), and now it makes a lot more sense: If Soto had his way, he’d give all the children away… because he needed to save room for the scores of friends, fans, admirers, and disciples that he’s now left behind.

In honor of punk rock’s latest gaping void, we dove deep into the socials and collected some of the wonderful things that our community’s been saying—and feeling—about the late, great, Steve Soto. Grab a tissue, hit the play button, and read on.

And Steve? Looks like your karma’s way up… you will definitely shine on; like the moon, and the stars, and the sun.

with heavy heart i share the passing of steve soto, my friend and bandmate since 1979. i dont know what to do. or to say.

We are shocked & saddened to confirm that our wonderful friend Steve Soto passed away in his sleep. An immeasurable loss to music & humanity, the shock has yet to really sink in…

I just found out Steve Soto passed away. He fought through so many health issues & they finally caught up. He was one of the most positive people I ever knew. Did the whole @VansWarpedTour with the Adolescents in a van last summer.
RIP my friend.

Good bye Steve Soto 💔
Such an amazing person. Such a great loss to the underground music community… RIP.

When you talk about California punk Rock and Punk Rock in general Steve Soto will forever be on top of the list of people who put it on the map. He 100% helped pave the way for all of us who decided to pick up an instrument and play our version of Punk. You will be missed. RIP pic.twitter.com/TSRdvkuVTB

I played @TheAdolescents all day & read a lot of posts from punk rockers everywhere honoring #SteveSoto -I feel the best way to remember him is by playing the music! I will add @TheAdolescents to @RadioFaction #314 @SIRIUSXM & keep playing the songs!!! #ripstevesoto https://t.co/GBY9d0QPnz

RIP Steve Soto, thanks for all the music. https://t.co/bkdTKQ4d1A

I’m so fucking sad right now. R.I.P. to one of the sweetest most talented people I have EVER met. My absolute heartfelt condolences to everyone who was touched by the great STEVE SOTO!!!!#RIP #stevesoto #mybassguitarhero

RIP Steve Soto of the Adolescents. Met him a few times and was also so nice. Easily one of the most influential bass players for me in my youth. pic.twitter.com/0NFgBl5rVC

I’m kinda grateful I was born after the first wave of punk because all those original L.A. punks were crazy asshole miscreants. All of ’em. MANIACS. Except for Steve Soto. Steve Soto was ALWAYS super kind and funny and sincere. Fuck yeah, Steve.✌

Sad we lost Steve Soto of Adolescents. Last time we were together was on stage at the Viper Room covering Sonic Reducer We will miss you!

Unbelievably sad to hear of the passing of Steve Soto. The Adolescents have been, and continue to be, my favorite band in the world. I was blessed to be able to play a number of solo shows with Steve, and considered him a friend. Go easy man. pic.twitter.com/by4Fq4hcHC

In 2008, I toured in the USA with Steve Soto & The Twisted Hearts. I was opening the shows but Steve and his band also learned my songs. Woke up to the sad news of his passing. RIP – a generous, sweet man and a punk legend.

RIP Steve Soto! Finding a cut out copy of the Adolescents LP in the dollar bin was a life changer for this punk. https://t.co/t8yBIqZlM5

Steve Soto, good friend, great listener, great story teller with a heart of gold. Amazing sense of humor and always a pleasure to pass the time with. A truly gifted musical man, you will be missed. We love you. Steve Soto photographed by John Gilhooley at Alex’s Bar. #stevesoto pic.twitter.com/9HSQ5oRCiB

Me hanging out with some of my favorite dudes on the Salty Dog Cruise this past April: Steve Soto, Stan Lee, Dan Root, Donnie Spada, and Pete Parada. RIP Steve. -Dexter pic.twitter.com/T3fderXwzt

Heartbreaking news that Steve Soto has passed. Such a kind & humble guy, in addition to being an original California punk legend & innovator. I was fortunate enough to have casually known him since the 90s & he was always such a good dude. 🌹@TheAdolescents #RIPSteveSoto pic.twitter.com/KSbMumabzl

Saddened to hear about the passing of Steve Soto. I only knew Steve in passing, our bands played a handful of shows together over the years. Was always a welcoming and friendly face to run into. I’m appreciative of those memories and having had the chance to share the stage.

When you talk about California punk Rock and Punk Rock in general, Steve Soto will forever be on top of the list of people who put it on the map. He 100% helped pave the way for all of us who decided to pick up an instrument and play our version of Punk. You will be missed. RIP pic.twitter.com/usYcaYLPxC

RIP to OC punk legend Steve Soto. Huge influence on us and many of our bands. Kids of the Black Hole may be the best punk song ever written. Ed Colver pic pic.twitter.com/JetaOROcyP

Steve Soto, the punk veteran who co-founded the Adolescents and Agent Orange, has died at age 54 https://t.co/C8pita7HT1 pic.twitter.com/M0wvqXWzTk

You left this world too soon my old friend but your music is immortal. RIP Steve Soto, thanks for the melodies. pic.twitter.com/rP8yHB6Xv6

We lost a dear friend, Steve Soto of the @TheAdolescents, who passed away too young. But his influence will carry on and his presence will be remembered as a gift to us all.

We’ve lost a true punk icon. RIP Steve Soto, founding member of The Adolescents and Agent Orange. Our hearts go out to family, friends, and fans. You left this world too soon but your music and your influence will live on forever. pic.twitter.com/XA7kTmyrwU

RIP Steve Soto, our condolences to you & yours. ❤ https://t.co/N1kuRnHnI8

I have to share the story with this post. Last night around midnight I was fuming over the current political/social climate that’s reeking havoc in America. I wanted to lash out. I wanted to punch something. I wanted to scream fuck you into the ether.. alas I decided to make a playlist instead. punk rock bands that reflect my despair. Something fast loud catchy. I like drugs! I want to give you the creeps! Teenage rebel!! GIMMIE GIMMIE GIMMIE! Code blue!! I couldn’t decide which adolescents song to put on.. hmm.. Rip it up? Creatures? Kids of the black hole? The whole album is so great. Finally decided on Amoeba remembering seeing them in Sacramento in a Park in the 80s.. such a great show. Such a great song. This playlist hit the right spot for me when I needed it the most. Twisted, fucked up, brilliant. Music is a powerful tool in times of anger and sadness. Anyway an hour later I looked at Instagram and saw people eulogizing Steve Soto died. Life isn’t fair. Sometimes it just sucks.. But music can help you feel like you’re not alone. Amoeba did that for me last night. RIP Steve Soto