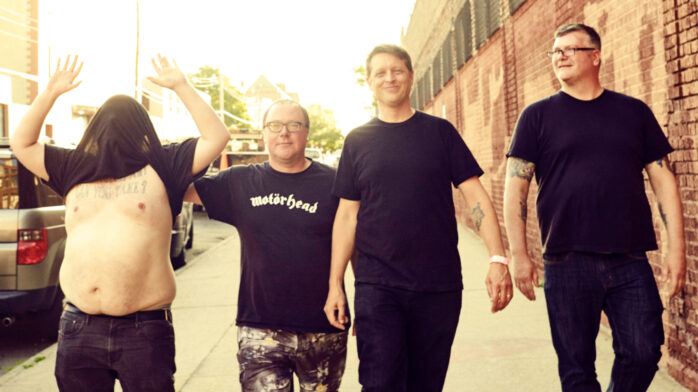 Paddy’s Picks: How Much of the Dillinger Four Bassist’s Midwest Playlist Can You Take?

Dillinger Four bassist Patrick “Paddy” Costello is many things to many folks – bassist, father, bro, bartender, classy tattoo aficionado, to name a few. For this piece, we faxed him up in the Twin Cities asked him to don his tastemaker hat for this tasty playlist. So grab a snifter of your favorite cognac, hit play, read on, and just let yourself go. And if you can’t take it all, then you’ve answered our question.

1. THE BROKEDOWNS
”The One True Freak”
Elgin, ILLook, the very fact that this band isn’t at least paying their electricity bill off of doing this band is a daily reminder of how stupid PUNK™️ is. They’re not from Chicago.

2. COLOR TV
”Night After Night”
Minneapolis, MN + Portland, ORIf you’re not into this song, stop now. It’s only gonna get worse for you.

3. FUCK YOU IDIOT
”Right Way”
Chicago, ILOne time I threw the drummer a hot dog, he caught it, took a bite, and then threw it at some other dude. This is one of Chicago’s deepest secrets.

5. CONSTANT INSULT
”Some Broken Bones”
Minneapolis, MNJust listen to this. It’s probably my favorite thing from Minneapolis that I’ve never read anything about. They might as well be audio mock duck.

7. DIRECT HIT!
”Hospital For Heroes”
Milwaukee, WI + Chicago, ILPerfect vocals, perfect drumming: That shit’s fucking annoying. Unless it’s from Milwaukee; and you know the band had to have spent like 16 months in the basement, ‘cuz no one wants to hear all that out here unless you come correct.

7. ARMS ALOFT
”Three Altars for Rats”
Eau Claire, WIOne time I got so hammered with these guys in Chattanooga that two of them got arrested. While getting processed, the cops asked them if they’d ever had suicidal thoughts. They responded with a resounding, “Every fucking day.” Their LP on Red Scare Industries is a must.

8. THE MONS
”Asshole”
Chicago, ILIf you don’t enjoy this, you don’t enjoy “punk.” D4 once added these Chicagoans to an already sold out show, because fuck you. We wanted to see it.

9. NATURE BOYS
”The Gone”
Kansas City, MOSuch a haunting jam. I’ve had this song caught in my head for so long that I kind of almost hate these fucking dudes now.

10. THE DEVIOUS ONES
”Stylus to Speaker”
Detroit, MIDetroit’s Buzzcocks? Maybe. I’m no scientist, but I can tell you that I own two copies of this record and it’s not by mistake.

11. MURF
”Nukem”
Minneapolis, MNTwin Cities creeps bridging hardcore and AmRep stylings with a theme based on RoboCop. A little something for everybody. It’s probably the best live band on this whole list.

12. C.H.E.W.
”Voluntary Human Extinction”
Chicago, ILI seriously found out about these Chicago folks by getting their demo as a tip while bartending in Minneapolis, and have been following them ever since.

13. THE SLOW DEATH
”Jeannne”
Minneapolis, MNI’ve played bass on most of the Slow Death’s material, so I’m probably a little biased when I say that Pretty Boy Thorson writes the greatest fucking songs on the fucking planet. So, I went and put a Smiths cover on here.

14. THE RAGING NATHANS
”Teenage Amnesia”
Dayton, OHI like this band so much that I’m willing to work past the fact that they named themselves that. Who would do that? “The Raging Nathans?” What the fuck?!

15. BIB
”Hypnotized”
Location UnknownBIB is of my favorite bands of the last few years. These fucks are so weird, I can’t tell if they’re from Minneapolis or Omaha or what. I made eye contact with their guitarist while they played up [in Minneapolis] once. It was kinda creepy. I dug it.

16. HOSPITAL JOB
”Mount Rushmore”
Springfield, ILI actually have no idea how I heard of Hospital Job, and I don’t think I really know anything about them except that I like the records? It’s like, they’ve always just been there, man.

17. CANADIAN RIFLE
”Peaceful Death”
Chicago, ILA Chicago powerhouse for those with a Leatherface/Husker Du sweet tooth. I’ve listened to this record more than any other new record this year. Real talk.

18. URANIUM CLUB
”That Clown’s Got A Gun”
Minneapolis, MNIf you haven’t fallen down this rabbit hole yet, unleash yourself.

How much art can you take?