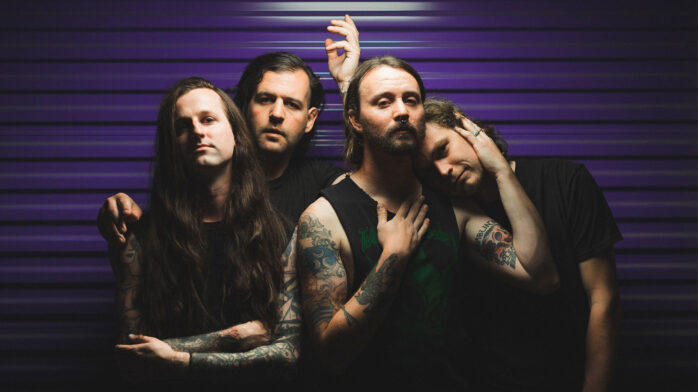 Typesetter is a band that doesn’t quite fit into any one box you want to put them in. Their sound is raw but eloquently pieced together, varied but concise, and boundary-pushing yet familiar. It should come as no surprise that the band draws from a wide variety of influences – some that are a bit closer to the surface than others.

Although their 2018 album, Nothing Blues, (a followup to their 2014 full-length debut) was officially released at the end of last month via 6131 Records (on Oct. 26, 2018 to be exact!), we are very excited to celebrate its release with a not-to-be-missed record release show, set for Saturday, Nov. 17 at Sleeping Village. To get you ready for the big gig, guitarist/vocalist Marc Bannes has put together a comprehensive playlist of songs and bands that were influential in the creation of Nothing Blues. Take a listen below and find out how each of these songs played their part in inspiring Nothing Blues.

We’ll let Marc take it away!

Marc Bannes:
I get anxiety over how many good songs there in the world, and how talented people keep turning them out! It stresses me out that I’ll never get to hear every good song. What a time to be alive. Anyway here’s 10 songs that considerably influenced me during the writing of Nothing Blues.

“Like Eating Glass” – Bloc Party:
Kyle [McDonald, guitar] and Alex [Palermo, bass] have always been big fans of Bloc Party but I never got into them until they played this in the van on tour. This is the first song from their first record, opening into a dizzying delay loop and a drum groove that sounds like a sampled breakbeat. Each sections drips with anticipation for the next.

“Dead Friend” – Against Me!:
This is a heart wrenching one: Laura’s ability to eulogize over a celebratory song has always been breathtaking but this is the standout for me. I never met John “Pope” Allison but I toured with his friends in Shiny Toy Guns right after he passed, and heard all about him. Such a beautiful song.

“Powerline Days” – Kali Masi:
Incredible songwriting that for me straddles the line between narrative and impressionism perfectly: “love like a kite string in a bad storm; tense and conductive.” You don’t need to know exactly what Sam Porter is singing about to know what he’s singing about. Fun fact, I sang in the gang vocals on this record.

“7/4 Shoreline” – Broken Social Scene:
A beautiful cacophony of a rock band, a horn section, swirling keys and ghostly vocals. The breakdowns and buildups tug at all my heartstrings. Kevin Drew is brilliant and anything Leslie Feist touches is gold. I’m not a math person, I don’t want to count while listening to songs, and this one nails the odd meter feel with a pristine elegance.

“1940s Fighter Jet” – The Sidekicks:
This one follows one of my favorite songwriting templates: disparate vocal and guitar, warm but lonely melodies, and then a full band explosion. This song begs to sung full lunged in an empty street at night. The Sidekicks get a ton of airtime in our van. Their 2018 LP “Happiness Hours” should be on everyone’s best-of lists.

“Turn the Season” – Fucked Up:
Fucked Up are larger than life. They are equal parts band and experience. 2011’s David Comes to Life, a waking dream about love, rebellion and perspectivism in a lightbulb factory, has a bunch of standouts in its 77-minute runtime but this is my jam. Triple guitar caterwauling and minor vocal harmonies rope me in.

“Same to You” – Lydia Loveless:
Lydia’s alt-country style really came into formation on 2016’s Real. Amidst pedal steel and country inflected vocals, this album opener lassos you in with swirling guitars and a pounding groove that open into a huge chorus. Lydia lends her aching vocals to our track “Technicolor” on Nothing Blues.

“Aerobed” – Cymbals Eat Guitars:
Another song on this playlist to feature full verses before a full band explosion, singer Joseph D’Agostino reconciles mixed feelings regarding a friend who’s sick both medically and emotionally on tour. It’s impossible to not be in a touring band and know exactly what he’s singing about, with a tinny reverb that hangs on to every S until the final verse.

“Of Trees” – Restorations:
Way back in 2009 I was pretty lost, creatively and emotionally. I mostly hid in my room with booze and drugs to cope with the overwhelming dread that I lived with. One day I stumbled upon an EP from an unknown band from Philly called Restorations. Only two songs that could have been recorded in either a massive theater or a basement, featuring writhing fuzzed out bass, pulsing guitars and arrangements that grew and fell. It was familiar yet timeless and brave in a way I didn’t think I could be, and I knew I wanted to start a band that sounded like that. I love Restorations; their first two songs are by far my favorites.