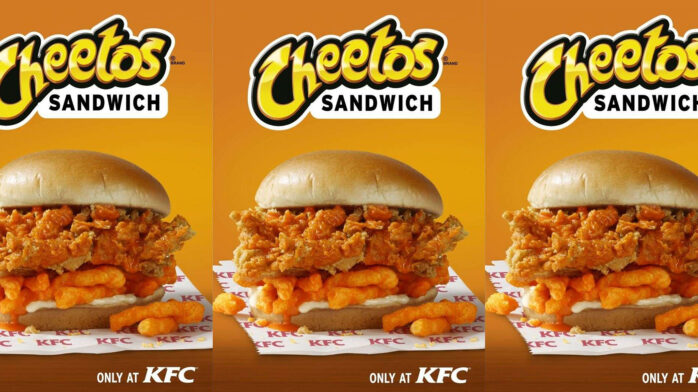 KFC Gets Rid Of Lettuce, Adds Cheetos To Chicken Sandwiches

Do you live in North Carolina, Virginia or Georgia? You’re in “luck,” because KFC is testing a Cheetos Sandwich. If you’ve ever thought, “I like fried chicken sandwiches but that stupid lettuce is always ruining it,” then this is the sandwich you’ve been waiting for, because KFC has replaced that stupid lettuce with Cheetos and a “special Cheetos sauce.”

If you don’t live in North Carolina, Virginia or Georgia you can just grab any fast food sandwich and jam some potato chips on that thing. Fuck it, put Doritos on a Big Mac, throw some Funyuns on a Baconator, jam some Ruffles in a Whopper, because nothing matters anymore.

In a press release from KFC, which they hope will get media outlets and blogs to post about the Cheetos Sandwich and give them free advertising, they say, “Both KFC and Cheetos have dedicated fan bases loyal to each new creation. It only made sense to merge these two iconic brands together to provide an irresistible and flavorful sandwich that gives the best of both worlds.”

So basically this is like a split 7 inch from your two favorite bands, because now brands have “dedicated fan bases” like bands and musicians.

KFC describes the sandwich in a press release: “Made by coating a juicy, hand-breaded Extra Crispy chicken filet with special Cheetos sauce and placing it on a toasted bun with mayo and a layer of crunchy Cheetos, the Cheetos Sandwich will give you a blast of craveable Cheetos in every bite.”