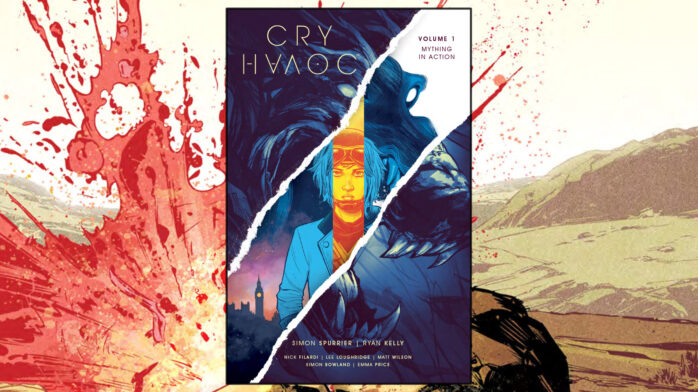 As a female veteran who served as a combat medic on over one thousand missions in Iraq, it’s tiring reading the trope of a soldier fighting a righteous cause. War is messy—like being in an episode of Looney Toons. There’s nothing righteous about it. But when I heard about Cry Havoc, a comic about a lesbian werewolf in the middle of Afghanistan, I couldn’t help but be intrigued.

Cry Havoc follows the transformation of a female military contractor named Lou into a werewolf, who later breaks out of a compound in Afghanistan. She’s also a free spirited violinist that’s in a torn, committed relationship with a female zoologist. Three interwoven timelines—the past, the present, and the future—are differentiated by color-coordinated border colors that make the transitions between each clear and seamless.

These timelines sprint to a start when Lou is attacked and turned by an electric-looking werewolf while playing her violin on the streets of London. Later, she meets a man who sees the monster in her without her needing to confess it—he’s a monster himself. They have an affair, she gets pregnant. After a rampage through London, she’s discovered (and forcefully recruited) by a group called In Hand, a private consulting organization who recruit monsters.

In Hand promises a cure, but first Lou has to go to Afghanistan for them to help track down another monster that went rogue. Lou’s recruitment reminded me of the way real-world recruiters dangle promises—seeing the world, taking care of student loans, and sign-on bonuses.

As a soldier, Lou is a straight up newbie. Watching Lou’s group take fire for the first time was like a punch in the gut for me—as was her realization that she’s truly in the middle of Afghanistan and the people there want her dead. During my deployment in Iraq, I was continually reminded of the same thing through several moments—the heightened tension of leaving the FOB, being mortared, treating the wounded, saluting the coffins of the fallen. “Is this the day I fire my weapon? Is this the day I shoot or kill someone? Is this the day I die?” Being a member of a uniformed, foreign occupying force creates internal feelings of conflict—from cultural differences to questioning your purpose for being there.

The special ops group she’s with is being escorted by an army squadron, and there’s a high degree of tension between the two groups. The soldiers aren’t aware that the special ops group they’re escorting are monsters. Cry Havoc pays close attention to the details of military life, from the vernacular and acronym-laden language to the more intangible things—rampant sexism in the military is showcased through soldiers calling Lou a ‘female’ in a derogatory tone, leering facial expressions, and in the happy way they told her the Taliban hates ladies. The tension between the soldiers and monsters is on point.

Lou can’t keep down a job, and mostly earns income through playing her violin on the street. After becoming a werewolf, she routinely lets the beast out by running rampant through the city at night killing animals and trashing her apartment. Every person enlists in the military for different reasons, but a common one is a feeling of wildness, drifting, and lack of focus in your life. The first time she loses control, during a band performance, she goes into an intense violin improvisation and completely upstages the rest of her band members. She doesn’t shift into monster form—but it’s an indication of what’s to come.

Some of Cry Havoc’s most satisfying moments are seeing the monster forms along with the explosion of their own unique colors. Her loss of control is reflected in a blast of blue energy around her when she’s in monster form. When her human side shows through, her actual face floats through the blue energy in an in-between state that feels quite disconcerting. The monsters in the comic are drawn from folk tales from around the world—Hildisvíni (a Norse war pig), the adze (an African firefly swarm demon), and the tengu (a Japanese bird demon) are just a few inspirations. The scenes of transformation tend to be emotionally charged, leaving behind a smear of gore and carnage behind. These beings aren’t any kind of hero.

Another topic Cry Havoc nails that other super-soldier stories fall short of: the military can feel like being a tiny cog in a huge machine. During my time, I never forgot how replaceable I was. There was always someone who could fill my shoes. I wasn’t special. I, and thousands of others like me, were trained to do the same job. These facts were drilled into my head.

Later in the story, In Hand attacks a compound, and the monsters are hit with a serum that prevents them from changing. I felt that reflected this concept—the monsters lose what’s special about them, mindlessly being marched out of the compound. Every moment of every day, you’re being controlled while you’re deployed. When you finish deployment, you go through a standardized series of classes, counseling, and medical examinations. It’s highly reminiscent of the mindless marching out of the compound.

In total, Cry Havoc gives a surprising glimpse into the process surrounding enlisting, being in the military, and deployment. It ends on a high note, but it’s a conclusion that recalls a less than happy ending for many troops. Returning home isn’t always the end of a war for those enlisted; many face PTSD, suicide, depression, and in some cases chemical dependency. To me, though, Cry Havoc illustrated why sticking with your own kind—sticking with your own monsters—is the best option: oftentimes, they’re the only ones who truly have got your six.