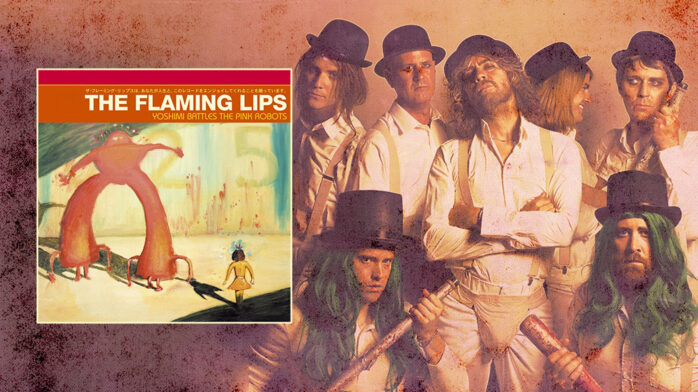 17 Years In, ‘Yoshimi’ Remains The Flaming Lips’ Most Universal Classic

I first became acquainted with Yoshimi Battles the Pink Robots while working at a Border Books & Music in Ann Arbor, Michigan the year it was released. It was one of the few records that had the approval of the whole music department staff, from the pompadoured blues guitarist and the boomer-aged Beatles fan to the guy who co-coordinated the local hipster dance party. It got played virtually every day, and even I, the resident curmudgeon/contrarian, got into it. In practice, it’s about as universal a record as has been made in the last two decades.

On paper, this is surprising. Let’s lay it out, shall we? Yoshimi is a noisy psych-pop concept record about a young Japanese woman fending off evil robots, with a smattering of songs about mortality for good measure. It’s a meticulous studio production piece written and performed by a not-so-young indie/alt-rock band that had already spent two decades in “should be bigger” territory. Indeed, the Flaming Lips were the band that most of your favorite bands loved, but they’d been effectively discarded by the mainstream as a goofy one-hit wonder less than a decade earlier (though, of course, they’d rebounded considerably with Yoshimi’s critically beloved precursor, The Soft Bulletin). In short, this was not an album poised for the mass market.

How, then, did an album this weird, this niche-sounding, become a favorite of critics, indie rockers, college kids, and just about everyone else? You could posit all kinds of theories, but the clearest answer is simple: it’s those melodies. Whether you cared about the storyline or not, it was hard to deny that Yoshimi found the band at the height of their powers, delivering a filler-free collection of focused, lovely earworms. The touchstones are pretty standard — Beatles, Beach Boys, maybe a smattering of Spiritualized, and myriad French pop ticklers both modern and vintage — but ultimately, it never really sounds like anyone but The Flaming Lips, and the best version of them at that.

The songs—even instrumental passages which might be filler is less careful hands—are indelible. “Do You Realize??,” in particular, is just about perfect. The melody and arrangement are so buoyant, it’s safe to suspect that massive swaths of people have never even noticed that they’re singing along with an exceedingly tender lyric about accepting death. A few years earlier in the band’s career, Wayne Coyne may not have been able to deliver a song so bittersweet without an ironic smirk, but on Yoshimi, he and the band found a perfect balance between humor and gravitas.

That’s but one highlight. The first of the two title tracks, of course, is unforgettable; “Are You a Hypnotist??” (these fellas were really loving the double ‘?’s) is trippy and mysterious. “Ego Tripping at the Gates of Hell” could be half the song it is and still be a classic based on the title alone, but its wild production and shameless Mellotron exploitation would be more than worthy regardless of what you called the end product. I could go on, but it would just turn into a track-by-track commentary.

In the 17 years since Yoshimi, Wayne Coyne and co. have remained one of the most adventurous, ambitious bands in pop. They’ve released oddball gambles like Christmas on Mars, deconstructed two unapproachable boomer-rock classics, and guided Miley Cyrus through one of her strangest phases yet. Through all that, though, Yoshimi Battles the Pink Robots has remained an essential touchstone, and perhaps their most undeniable record.

You can see the Flaming Lips at Riot Fest 2019 on Friday, September 13. It’s a rare chance to hear an incredible album in full, so don’t miss it.